What happens when supercritical fuel tanks deplete below critical point?

Gaseous fuel/oxidiser (eg H2 / O2) is stored as a supercritical fluid so it becomes homogenous; not prone to delivering matter with fluctuating densities, which would cause major stresses in rocket engines.

What happens when sufficient contents of the tank has been expelled such that the contents drop below supercritical (where both liquid and gas are present)?

For the Shuttle, the flight rules cover these cases.

The O2 and H2 tanks had quantity "redlines" defined - operation of the tank heaters below those quantities could cause the heaters to overheat. The redlines were 2.5 % in the H2 tanks, 6.5 % in the O2 tanks.

The 2.5 percent and 6.5 percent numbers are the minimum quantities guaranteed to be obtainable prior to reaching maximum tank heater temperature limits.

When (if) you got down to those quantities, you stopped using the tank.

Other sections of the rule covered the case of losing supercriticality.

Apologies for the all-caps but that is how the rules were written. The first quote is rule rationale and therefore not in all-caps.

Here's a screen shot of an MCC cryo display about halfway through the STS-88 shuttle mission. 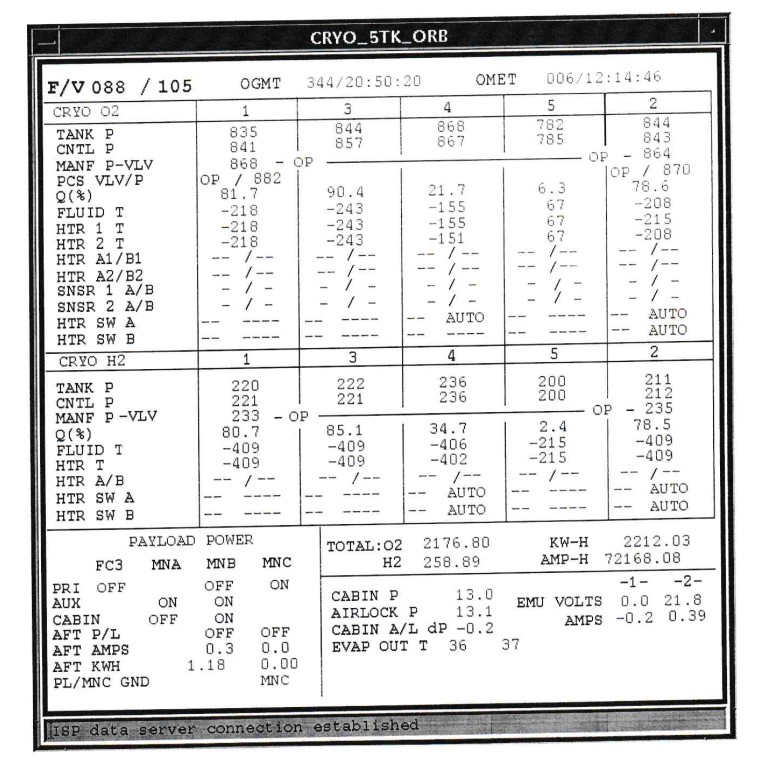 You can see that Tank(s) 5 have been depleted and are at their quantity redlines. Tank(s) 4 are in use and being depleted. Tank(s) 1 and 2 were used for ascent and early in the mission, Tank(s) 3 have hardly been used at all.

Note: Please keep in mind these supercritical fluids are reactants used in the Apollo and Shuttle electrical power systems. They are not propellants used in the propulsion systems.

Not the answer you're looking for? Browse other questions tagged tanks supercritical-fluids or ask your own question.

22
Why would oxygen be stored as a super critical fluid?
4
Are there examples of a spacecraft designed for transitions from supercritical to liquid+gas mixtures?