Orbital mechanics: Jump from ISS, where will I meet again?

This is a hypothetical question, and I hope it is on-topic here.

If an astronaut would stand on the surface of the ISS, and they will make a jump directed perfectly towards the earth, what will their orbit be, and when will they meet again with the ISS? After one round (90 Minutes) or half a round (45 Minutes) around the earth.

Note: I read somewhere (do not remember where) that two object, separated at a point, will meet again while in orbit (neglecting any atmospherical drag).

If your jump is perfectly nadir pointing, and all perturbing forces are neglected so we can consider both your orbit and the ISS orbit as perfect two-body orbits, you will meet again after one full orbit, as a low-velocity impulse that is perfectly radial does not affect the orbital period.

From your perspective, relative to the ISS, you will move downward initially, then you will drift forward, then come back up, then drift backward, then eventually settle back down where you jumped from.

If I have time later, I can see if I can graph something up.

I like to play with the notion of cyclers. One type of cyclers is a circular orbit crossing an elliptical orbit, both with the same period. On this comic book page the Cheng Ho is such a cycler.

The geometry of orbits about the sun and around the earth are the same so I'll leave the labels at A.U. and years. 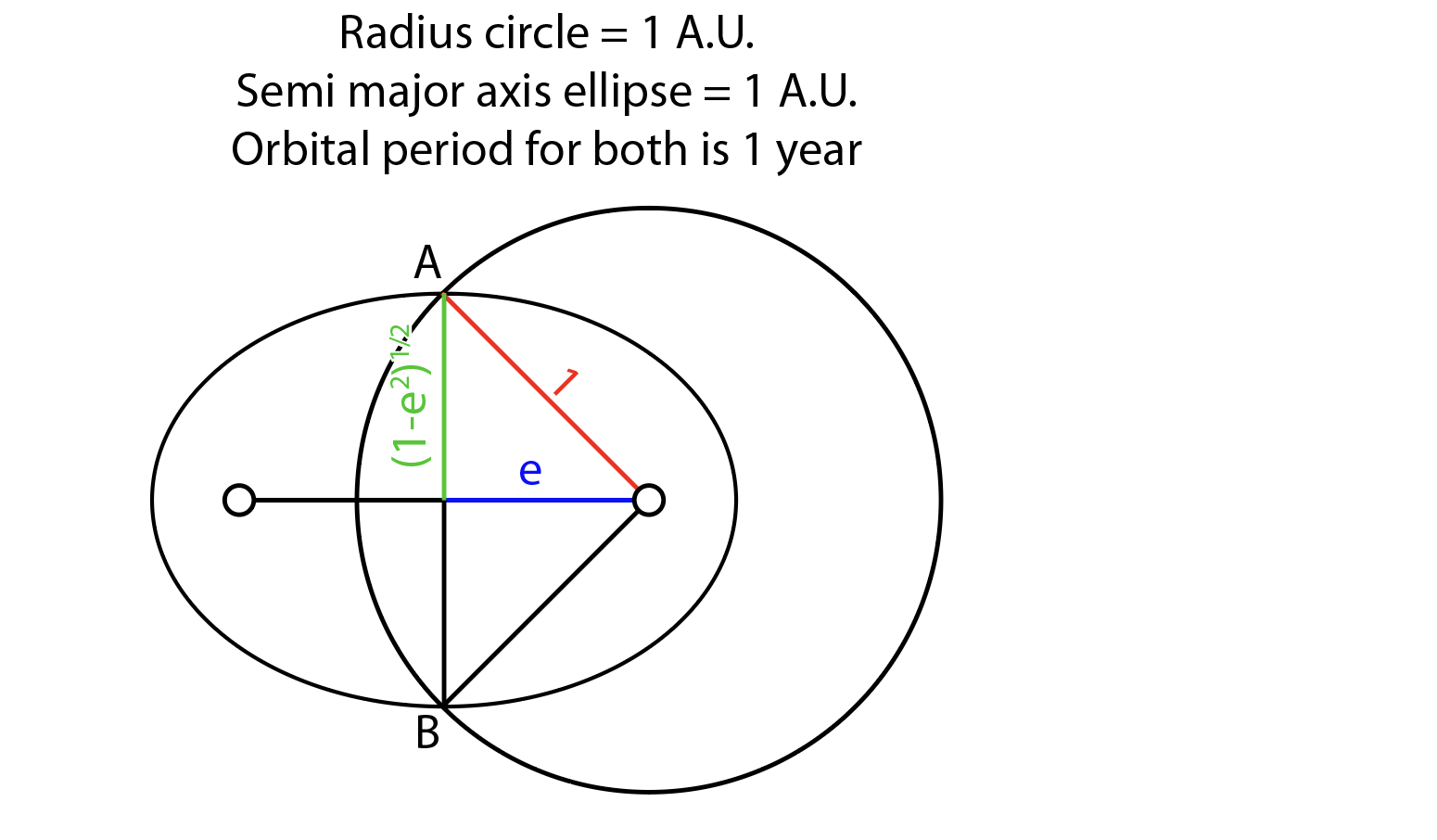 Here for simplicity's sake I set both the semi major axis of the ellipse and radius of the circle at 1 A.U. 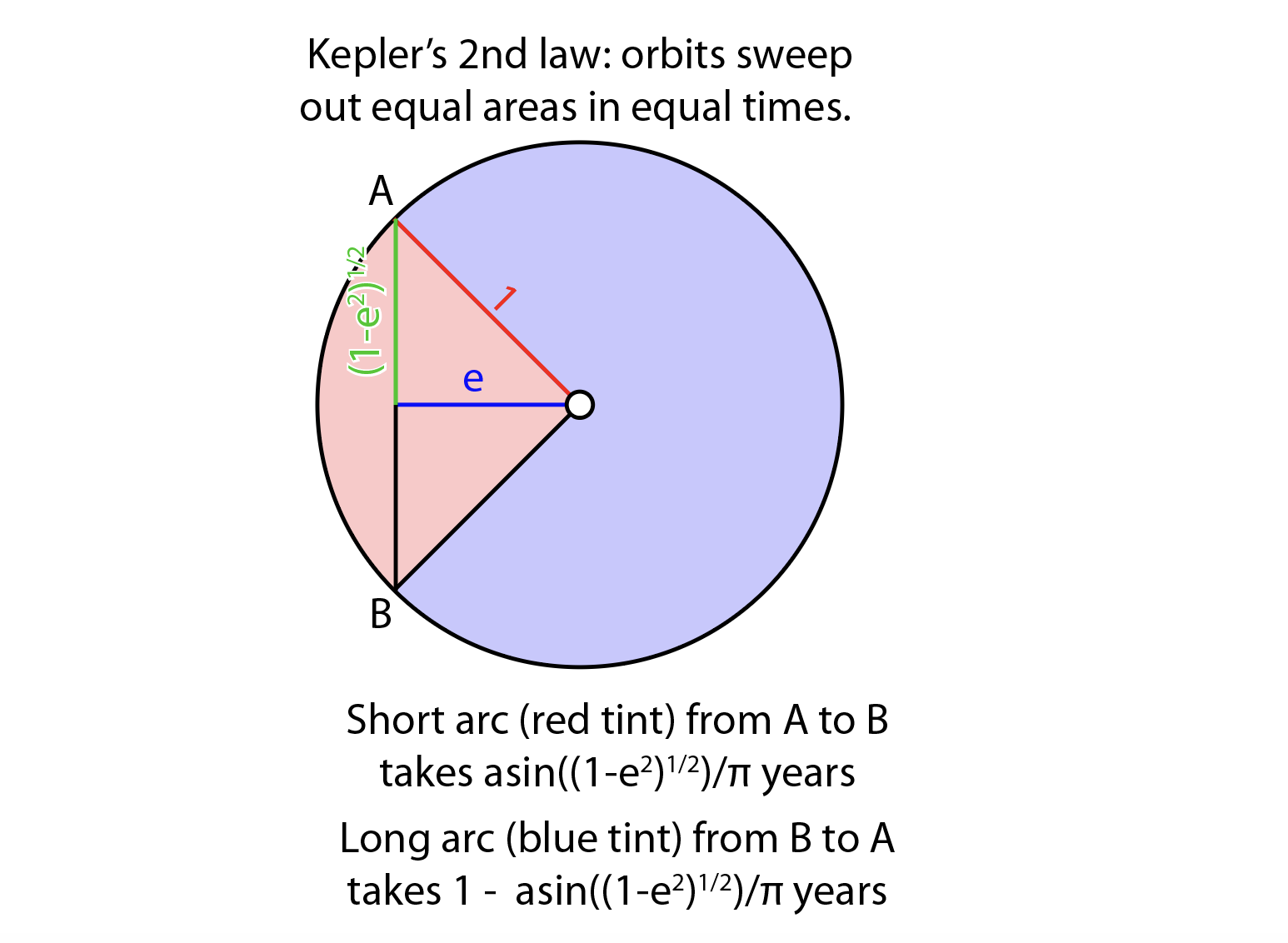 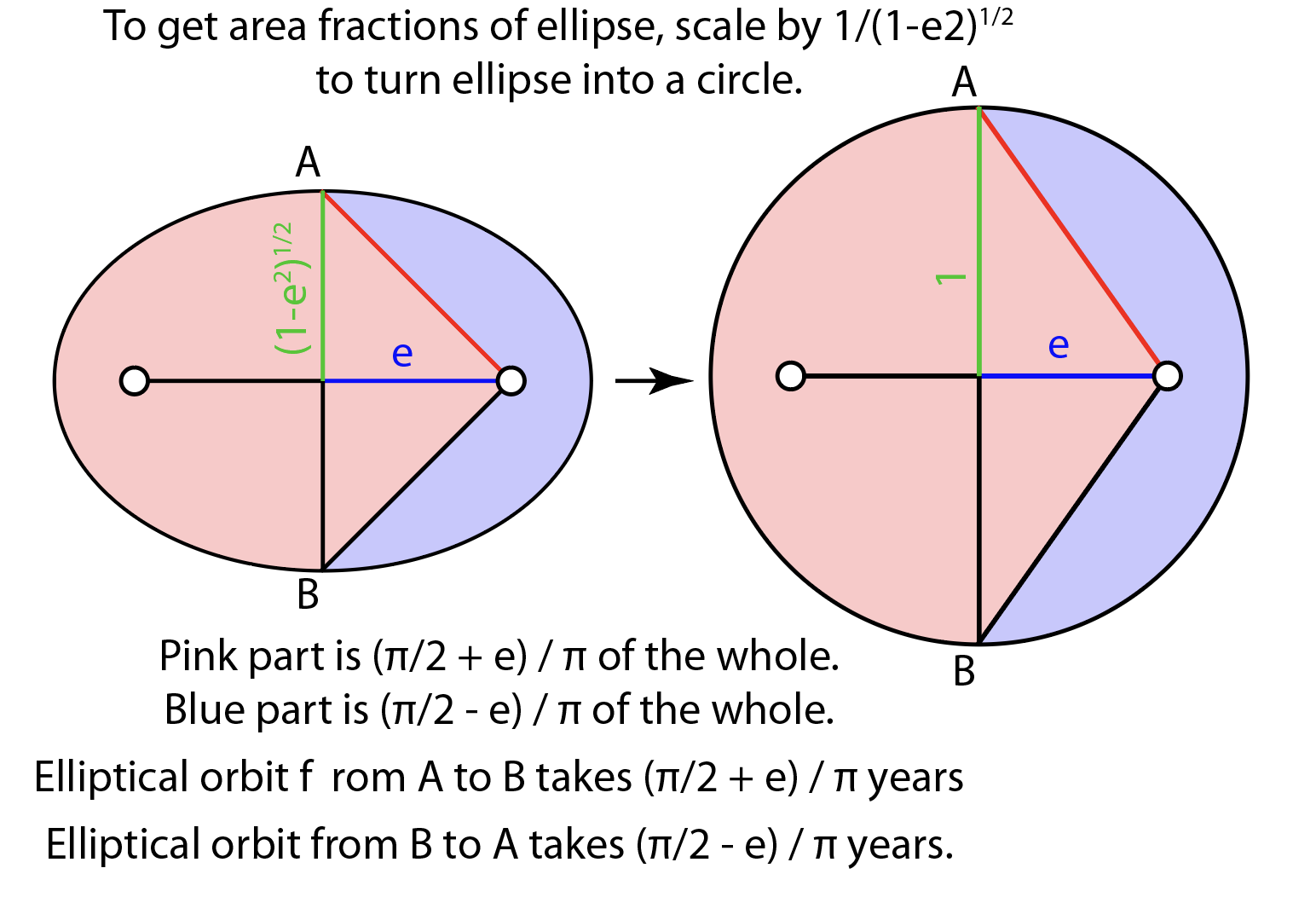 Area fractions of the elliptical orbit is trickier. We use Kepler's trick of stretching the ellipse along the small axis to make it a circle. This doesn't change the fraction of area occupied by pink and blue parts.

I think you can see that departing from A the two orbits would arrive at B at different times. So they'd miss each other at B. However they would both arrive at point A at the same time after a full orbital period.

Although someone jumping from a circular I.S.S. orbit would be in an ellipse with an eccentricity very close to zero. That is to say, darn near circular. I haven't done the math but I expect he'd land back on the I.S.S. in 45 minutes but probably a few meters from where he jumped.

Also accelerating in a direction perpendicular to your velocity vector would increase velocity and thus the semi major axis of your ellipse. You would no longer be in orbit with the same period as the orbit you departed. But, again, the velocities achievable with a human jump would put you in an orbit only negligibly different from the original orbit.

Not the answer you're looking for? Browse other questions tagged orbital-mechanics spacecraft or ask your own question.

26
How hard do you have to throw something off the ISS to make it deorbit?

6
Is there drag inside a Space craft?
11
If you throw a baseball from the space station, will it return to you in 90 minutes?
6
Satellite altitude as a function of time?
1
How fast are trips to the Moon for unmanned spacecraft typically?
4
Mars and back, staying only a few days
7
Effects On ISS Orbital Mechanics Resulting From Added Mass Of Dragon Capsule Visit
2
Orbital mechanics from Daniel Suarez's book "Delta-V"
3
What is the acceleration in an orbit decaying due to air resistance relative to one not decaying?