Could we easily build a "super-heavy" Ariane 6?

If we simply sticking 5 Vulcain engines (instead of 1 currently) and 6 powder boosters (instead of 4), could we get a super-rocket for a cheap price or is it more complicated? When I say "cheap-price", I mean we don't need to re-create a rocket from scratch, just paid elements and some R&D.

A similar proposal was made for Ariane 5 once. CNES did a study in 1991, for an Ariane variant that would support a manned Moon mission. This had 5 Vulcain and 4 EAP boosters. As you can see, the first stage has been enlarged significantly. Capacity 90 tons to LEO, 35 tons to lunar injection. 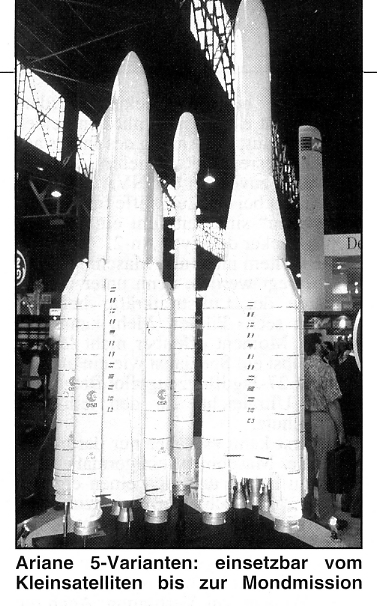 This would not have been cheap: you need a new first stage, and I suspect you also need a new second stage (the current one would be underpowered). Also new test stands, and a new launch pad. New tests to make sure the EAPs work when there are 4 of them clustered around 5 Vulcains. You could easily spend a billion Euros.

Adding liquid rocket engines to a stage that is otherwise unchanged (i.e. without increasing fuel tankage) could increase the rocket's acceleration, but, because of the added engine mass, actually reduces the total velocity that can be imparted by the stage. The higher acceleration reduces the total time to orbit and thus slightly reduces the amount of velocity increase lost to fighting gravity, but it's generally ideal to have just enough thrust from liquid rockets to safely accelerate off the pad. The only good way to make use of 5 Vulcains would be to develop a much larger core stage to hold enough fuel for the Vulcains to burn.

The P120 powder boosters, on the other hand, include fuel, so going from 4 to 6 would allow for more payload capability. This would require some redesign to the core stage, as more thrust force would be exerted by the additional boosters, and there are doubtless many relatively minor details that would have to be changed. For example, the location of longitudinal wiring and plumbing channels in the core stage relative to the mounting points of 4 boosters would probably interfere with the mounting points of 6 boosters. Similarly, the assembly building and launch pad would need redesign as well. The speed-versus-altitude curve of the rocket would be significantly different, which might have aerodynamic effects that need to be dealt with, but that's probably not insurmountable.

In general, rockets and their associated support systems are complicated, so even apparently small changes can turn out to be surprisingly costly. Adding more boosters to an existing design can be a relatively inexpensive way of increasing capability, but it's not a trivial one, as SpaceX found out in the process of developing the Falcon Heavy.

Not the answer you're looking for? Browse other questions tagged ariane or ask your own question.

15
Why are Europe’s Air & Space Academy and DLR urging ESA and CNES to reconsider the use of solid fuels for the proposed Ariane 6?
21
Ariane 4: shroud around stage?
8
Ariane 5 performance data for escape missions
9
Why aren't the Ariane 5's SRBs reused?
9
Why do Ariane rockets not have ice break off on liftoff?
5
Ariane 4 Random Vibration
1
Has foam loss been observed in Ariane 5 launches?
13
What are these circular spots on these Ariane V SRB nozzles?
6
What is this flying debris during Ariane 5 liftoff
15
What's the shiny silver turnip on the bottom of this Ariane 5 launcher?