Why is the nozzle of Delta IV capped? 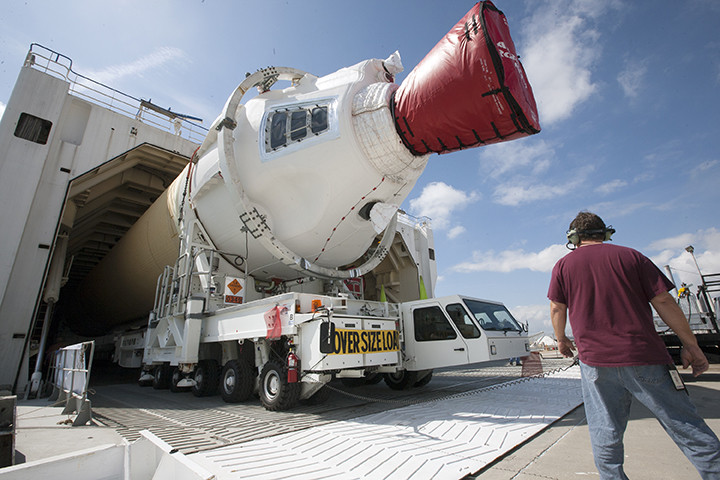 In the above image you can see that the nozzles are not open; instead they are capped. My question is: why are they capped, and is the same applicable to all rocket stages?

Airplane engines, and rocket engines are usually transported with a cover on them.

The journey of a thousand miles begins with a single piece of unexpected debris. The covers try to protect them.

A link to the relevant article: http://www.spaceflightinsider.com/space-flight-news/orion/exploration-flight-test-1/two-delta-iv-heavy-boosters-arrive-ccafs-leadup-nasas-eft-1-mission/

That's a long journey. As the crow flies it's only 1000 km or so. As the barge moves, it's at least twice that. Storms can fling debris, and so can traffic on the short segments where the boosters were on the road as opposed to on a barge. Those are protective shrouds to prevent damage along the route from Decatur, Alabama to Cape Canaveral, Florida.

Not the answer you're looking for? Browse other questions tagged rockets transport security delta4 or ask your own question.

13
Why are Europe’s Air & Space Academy and DLR urging ESA and CNES to reconsider the use of solid fuels for the proposed Ariane 6?
8
What are the advantages and disadvantages of assembling a launch vehicle horizontally?
16
Why is the Russian approach to the aerodynamics of their rockets different?
17
How can a rocket's self-destruct make for a safer situation than being out-of-control?
5
What are the advantages of Delta IV over Atlas V
6
Why did NASA design the SLS do the job of both the Ares I and Ares V?
5
Why are these Falcon 9 1st stage bodies (apparently) wrapped in black plastic for transport?
7
Why aren’t rocket stages modular and interchangeable?
13
Why do we need dedicated launch vehicles for small satellites?