Knudsen Pumps - Have they been used in Space Exploration?

I hit another Wikipedia tunnel of information, starting with the first link and progressing to the last:

So, after reading everything (until hitting my knowledge limit when starting the papers)...

The Knudsen pump also referred to as "thermal transpiration pump" or "Knudsen compressor" is a gas pump that utilizes no moving parts. Instead it uses thermal transpiration, the phenomenon that gas molecules drift from the cold end to the hot end of a narrow channel.

Wikipedia has a link to a paper about using this to control attitude, but has this ever been used? 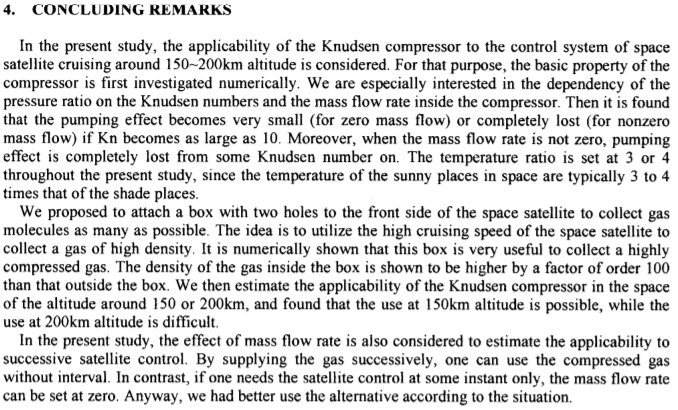 The paper seems to conclude it's possible at a 150km high orbit, but not beyond 200km. So has this been done? Any more information (in more laymans terms) on how this attitude control system would work? That paper was admittedly dense for my brain.

My overall impression is that this is a relatively cheap non-mechanical method for transferring liquids/gasses, using a low flow rate and temperature gradients. If you end up scaling it by making an array of them, higher and higher throughput an be achieved alongside other benefits (and, of course, complications).

My main question is:

As for why not, it's hard to parse the intended conclusion from the summary beyond "it may be possible at certain altitudes", but consider also some remarks about Knudsen Pumps from the intro to that same paper:

"...demerits like low pressure and the severe condition for the pumping system to be workable. [...] Researchers are are very doubtful of the use of the Knudsen compressor in space, since a gas in space is highly rareified."

In other words, it won't work without at least some atmosphere - the conclusion of the authors is that "150km altitude is possible, while the use at 200km is difficult." Presumably after 200km it's no longer workable at all. So it's completely useless for any probe or satellite in interstellar space or around a body with thin atmosphere.

In other words, the Knudsen effect could theoretically barely work at the extreme low end of LEO, and absolutely won't work for higher orbits. And that extreme low orbit isn't desirable for almost any application, because it has significantly more atmospheric drag than higher orbits. The Wikipedia article on orbital decay notes that:

"Due to atmospheric drag, the lowest altitude above the Earth at which an object in a circular orbit can complete at least one full revolution without propulsion is approximately 150 km (90 mi)."

Given the cost of developing and proving any space exploration technology, it's not surprising that one with very, very few applications has been largely ignored in favor of solutions that work under a much broader range of conditions.

17
Is atmospheric skimming for propellant feasible?
4
Why do two Starships dock in such a manner their heat shields face opposite sides?

17
Do any spacecraft use GNSS for attitude determination?
8
Have Magnetorquers been used anywhere outside of the Earth?
14
What is so difficult about the ISS zero propellant maneuver?
16
What are quaternions and how are they used to represent spacecraft dynamics?
5
Are robot arms ever used for attitude control in space?
3
Confusion with Apollo CSM attitude maneuvers (roll, pitch and yaw) during coasting to/from the Moon
10
How does desaturation of the reaction wheels work?