Do satellites in orbit undergo translational motion or rotational motion, when initially they are not given any additional spin?

We know satellites orbit around Earth, Moon or, any other celestial body. Is the orbital motion of a satellite (relative to earth), translational or rotational, when initially they are not given any additional spin? Further, do satellites need to use their Reaction Wheels in order to maintain a proper orientation (for example, the same side (communication arrays, cameras, etc.) facing Earth, Moon, or any other celestial body), if they had proper orientation at the time of satellite separation from the rocket after launch and they were not given any additional spin (also please neglect additional torques due to atmospheric drag, solar pressure, etc.)?

If we consider a satellite without active station-keeping system and assume that it was not given any additional spin after satellite separation from the launch vehicle, and neglecting any other torques (atmospheric drag, solar pressure, collision with orbital debris, etc.), will their same side face the earth?

Simply my doubt is, Which of the following a satellite with no active orientation-maintaining system undergoes, under the constraint no other torques act on it, and initially, it was not given any additional spin? 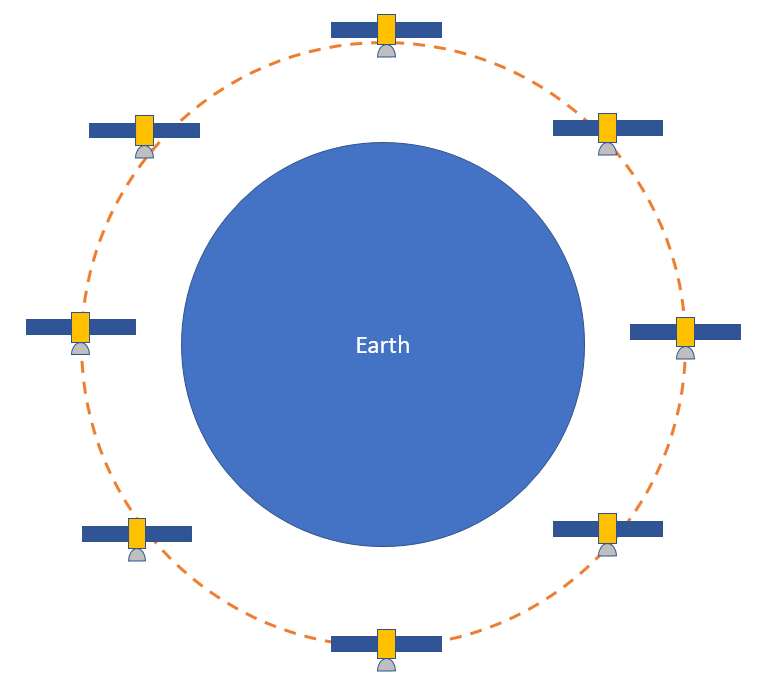 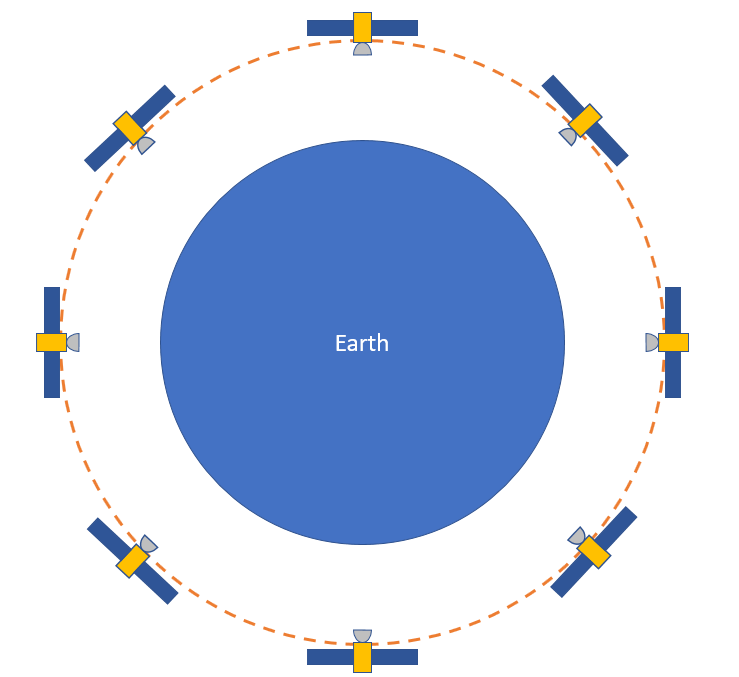 Image source: My own work :) (Hope you like it)

Image Description: The yellow coloured thing is a satellite bus. Blue ones are solar arrays. Grey one is a communication array (Sorry for not drawing the receiver, it might look like a rocket nozzle!).

Taken purerly in ideal terms, a satellite that has no additional forces acting on it will keep doing whatever it was previously doing rotation wise, but that may in fact be a carefully set slow rotation that keeps an antenna or camera facing earth for comunications or earth science, or fixed if it was a telescope watching a distant star. So either of your examples could happened depending on mission/starting state.

To expand on @gremlinWrangler's mention of

So near the end of life, as the altitude of the orbit drops, aerodynamic forces and torques will increase in strength. However I am not sure if they are ever strong enough to slow random tumbling down and produce a stable attitude with respect to the nadir (down, earth-facing, what you are calling "rotational" or not.

Hopefully some additional, more authoritative answers about what actually happens to dead satellites (do they tumble or do some, through either drag or gravity gradients (see How does gravity-gradient stabilization work? as well as Rotating in orbit? and also this one), passively reach some kind of stable attitude configuration.

To help make that happen I'll add a bounty if necessary and when the question hits 48 hours.

Not the answer you're looking for? Browse other questions tagged artificial-satellite orbit rotation or ask your own question.

39
Does a satellite naturally turn in phase with its orbit, always facing Earth?
5
Rotating in orbit?
5
How does gravity-gradient stabilization work?
1
Help with my tensor tension; how to derive and calculate this rigid body gravity gradient torque?

13
Why are LEO satellites not aerodynamically shaped?
10
Will SMAP produce predictable satellite flares visible to the naked eye from the surface of the Earth?
38
Why are the GPS constellation satellites in such a high orbit?
46
What would be the (most difficult) challenge to make a “10,000 year satellite”?
7
When astronauts travel to the ISS, how do they not get bored?
9
Has there been any satellites that used an 'upside-down' Molniya orbit?
2
Are there any designs of geostationary satellites available online?
38
Are there any satellites in geosynchronous but not geostationary orbits?
50
In what state are satellites left in when they are left in a graveyard orbit?