I was going throught the Space Shuttle Handbook, chapter Guidance and Navigation. In one of the Note boxes, it is written

Radar altimeter altitude is not used for navigation or guidance. The information is displayed for the crew to monitor

I have multiple queries

The radar altimeter was intended only for landing, to provide a direct, precise measurement of the altitude of the vehicle above the runway. It locked on around 5000 feet altitude but was primarily useful only in the final stages of landing, from an altitude of 100 feet down.

It was also intended for use in the autolanding system, which was never used operationally.

There were two independent radar altimeters. The measurements from the two systems were averaged for use in the autolanding system.

Once the autolanding system was abandoned, the data from the altimeters was not used in the onboard navigation systems. It was simply displayed to the crew.

A full description is available in the 1982 Press Reference starting on page 438. That is the source of this diagram. 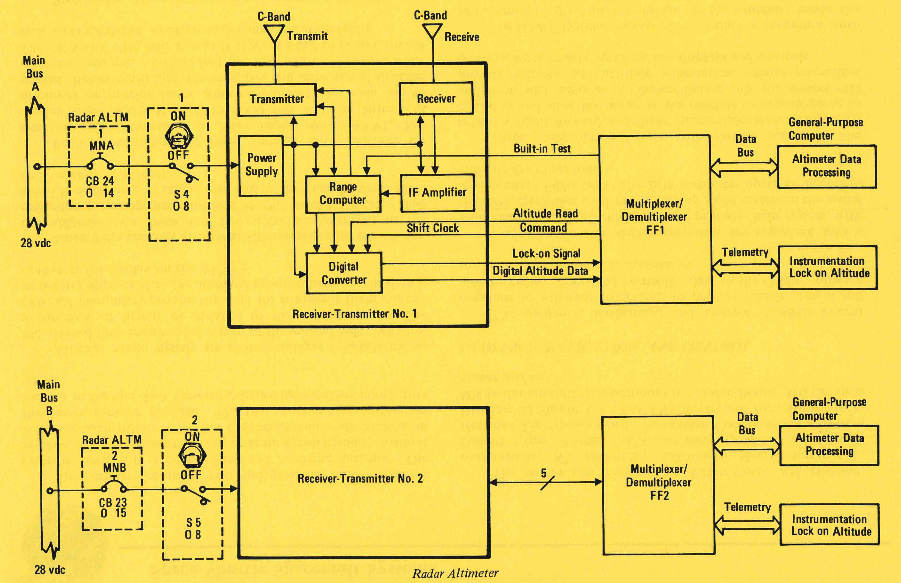 As far as flight rules go, the radar altimeters were considered a "nice to have" once autoland was abandoned. Flight Rule A8-1001 states that they were "highly desirable for night landings or low ceilings. However, there are no mission duration impacts for RA failures."

Not the answer you're looking for? Browse other questions tagged space-shuttle navigation or ask your own question.

22
Was the Space Shuttle always crewed?