Could the helical engine work?

A helical engine is originally described in this NASA Paper; see also the youtube explanation by Anton Petrov

The problem may be with powering the device. The original paper uses ions in a toroid to push the craft, generated by a large power source (like nuclear or fusion). But what if it was a physical reaction wheel?

If you impart a great amount of angular momentum within the wheel wouldn't that extra energy give the wheel more "mass" since energy is mass. Then your craft could "push" off from the wheel (imparting a positive force on your craft and negative one on the wheel). Then, before the wheel pushes back (at the end of your craft) you use another wheel (a storage wheel) to capture the angular momentum and store it away. This lowers the mass of the main reaction wheel and when it "pushes" back on your craft its mass is less (imparting less negative force on your craft and allowing a net gain). Then after the wheel is traveling with your craft again, you then re-impart the energy back into the main wheel from the storage wheel and your craft once again pushes off from it (and repeat as frequently as possible).

If this method is used then the initial momentum in the main reaction wheel could be generated before the craft is launched and thus the only problem is keeping the transfer of energy from one wheel to the other as frictionless as possible. No doubt you have to add some energy as the craft travels to offset what is lost to friction but then the amount is far less than the proposed ion design. Or are these two idea more or less the same thing just dressed up differently?

The problem is that this idea relies on a fundamental misunderstanding of Special Relativity.

But if you instead write down Newton's second law as $F = dp/dt$, where $p$ is momentum, this does work exactly (and equally for all observers), even in Special Relativity.

The source cited in the question is Helical Engine, (the PDF of the slides) written by David Burns, Manager, Science and Technology, Office Marshall Space Flight Center.

I am still looking for the quote, but I believe I recently read that Burns readily admits that the treatment seems to violate conservation of energy and is therefore suspect. By presenting the idea as slides, in a meeting of scientists and engineers, the goal is to allow the treatment to be vetted by others since Burns has not been able to yet identify a possible flaw.

This is absolutely fine! This is how science works. The problem lies in the clickbaiting internet articles in the popular media.

Note the last section on the final Conclusions slide: 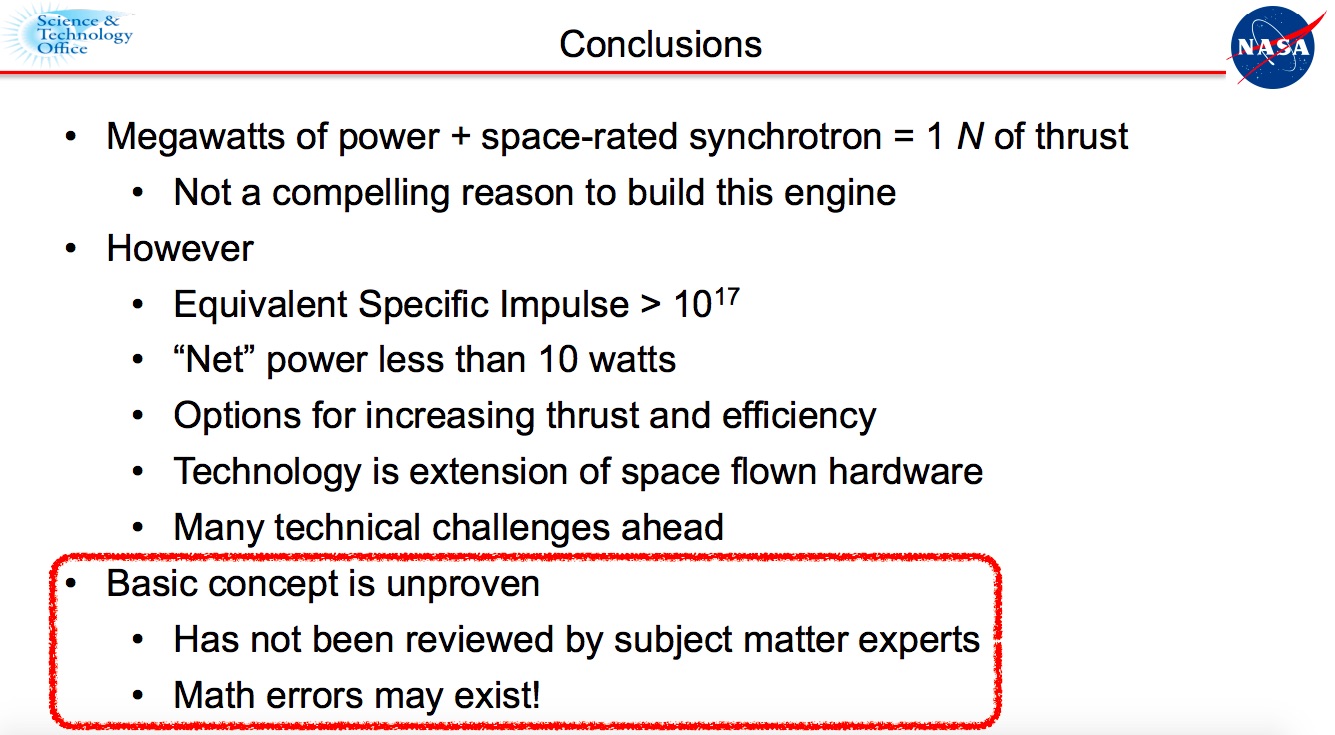 Then have a look at the recent article published in Forbes. Here is a short section of the extensive article For The Last Time, No, A NASA Engineer Has Not Broken Physics With An Impossible Engine

The article is thorough and in-depth and is worth reading in its entirety to get a better idea how conservation of energy, special relativity and electromagnetic theory need to be taken together. The article laments recklessly (my word) published clickbait articles that have been put in the popular press about it as well.

The specifics of Burns' idea are fundamentally flawed in a way that's very common among non-physicists. (Burns has a Ph.D. in electrical engineering.)

The problem is that this idea relies on a fundamental misunderstanding of Special Relativity. It's true that when you accelerate an object close to the speed of light, the same acceleration (or thrust) will increase your speed by much smaller amounts the faster you're moving; Newton's second law of $F = ma$ doesn't work, exactly, in Special Relativity. No object can ever move at the speed of light, and so as you continue to apply a force to a relativistic object, it's like you're increasing its mass, not just its speed. Different observers will disagree on the mass and speed of the object.

But if you instead write down Newton's second law as $F = dp/dt$, where $p$ is momentum, this does work exactly (and equally for all observers), even in Special Relativity. If Burns had properly accounted for the total momentum of the box+ring system, which must include the energy/momentum of the applied fields and forces required to accelerate the individual components (like the ring) inside the box, he would have noted that the total momentum never changes, even under relativistic transformations and perfectly elastic ring/box collisions.

Instead, he examined the ring alone, and that's led to his math errors and his untenable conclusion. In fact, pre-existing fixed-target experiments at particle colliders have already demonstrated a conservation of momentum that serves as a counterexample to Burns' expectations. His idea is already dead-on-arrival. 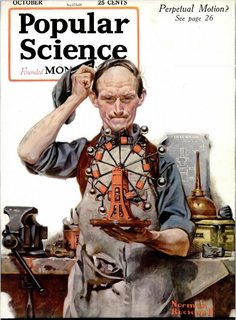 Perpetual motion has long been a holy grail of tinkerers and inventors, but it violates the laws of physics, including Newton's 3rd law and the laws of thermodynamics. Burns' new 'helical engine' is just the latest example of a self-deception making its way into mainstream science discussions. NORMAN ROCKWELL / POPULAR SCIENCE

The "paper" is on the NASA technical reports server because its author is the director of Science and Technology office at NASA Marshall space center. He is a CEO-level manager.

The mistake in the paper is in the undergraduate-level physics.

But lots of even good students make silly mistakes -- it is super common. Fortunately their mistakes do not get sensationalized like this one has become. It's a huge face-palm.

in it's extensive criticism of the overpopularization of the talk.

Not the answer you're looking for? Browse other questions tagged propulsion advanced-propulsion or ask your own question.

5
How does spin stabilization intuitively work?
10
Relativistic Rocket Equation
4
Kinetic reaction from emission of electromagnetic radiation
5
What are these four “debris” objects along with the Starlink satellites?
2
Can I “tack” towards a laser beam from which I am powering my 100% efficient & massless ion engine?
0
How should mass specific impulse calculated for relativistic exhaust?

12
What are the most promising non chemical rocket space launch approaches?
3
Linear motion reaction wheels?
8
Harpoon propulsion - what would be the problems?
6
What kind of engine does this Isp = 1600 refer to? Is it cubesat-friendly?
1
Could a Stirling engine be used to pump propellants into engines?
2
What could go wrong if someone overpowered an ion engine?
12
Is it possible to get a spacecraft into earth orbit using Linear Eddy Current Braking on an orbital runway?
1
Is the Helical Engine EM-Drive a real aproach to spacecraft propulsion?
3
Could the kinetic energy in the Sun's solar wind power an ion propulsion system for an interplanetary spacecraft?