Before the Space Shuttle retirement, there was a huge pressure on NASA, U.S. Administration, and everyone else directly involved in U.S. human space exploration using Heavy-Lift Launch Vehicle (HLLV) to come with suggestions to keep the U.S. access to space and International Space Station (ISS) gap-free and all the existing workforce employed in the industry, doing what they do best, while trying to reuse existing technology to achieve these goals.

Advisory committee was formed by the President G. W. Bush, Vice President J. D. Quayle and the Space Council, chaired by Norman R. Augustine, more commonly know as the Augustine Commission. Commission's end report included several proposed variants for the continuation for U.S. manned flight, among which Option 4B that called for a direct Space Shuttle derived HLLV reusing many parts of Space Shuttle, like it's two boosters, external tank, Space Shuttle Main Engines (SSME), and sitting Orion crew module on top of it, dealing away with the Space Shuttle Orbiter (SSO). The whole idea enjoyed large support of the space community, as can be seen for example in this video compilation supporting Augustine Commission Report Option 4B. 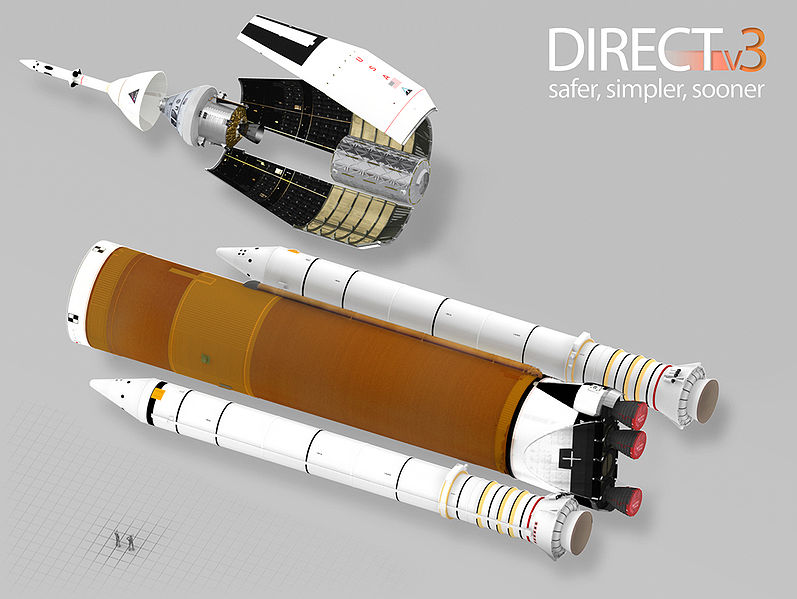 Variant 4B is the Shuttle extension variant. It offers the only foreseeable way to eliminate the gap in U.S. human-launch capability: by extending the Shuttle to 2015 at a minimum safe-flight rate. It also takes advantage of synergy with the Shuttle by developing a heavy-lift vehicle that is more directly Shuttle-derived than the Ares family of vehicles.

I can't state how much this option makes sense to me, but as much as I'd like it to, the whole thing isn't happening, is it? And the then so much discussed U.S. human access to space and workforce gap is now a reality, isn't it? So, I guess this naturally begs the question:

What eventually killed the Augustine Commission Report Option 4B, Directly Shuttle-Derived Heavy-Lift Launch Vehicle? Are there any good objective reasons that made decision makers believe it was worth scrubbing much of the existing Space Shuttle technology for a new U.S. HLLV in the form of first Ares, then SLS, that even now seems more as a gap-filler project that won't deliver for many years to come, even if all goes according to plans?

I do apologize if this seems as a bit of a rant, I guess it is, but I'm looking for objective explanation of what went wrong, and if possible, please substantiate your claims with references. Which decisions made U.S. lose its status as the world leader in human space exploration and caused this almost intolerable gap in U.S. based human spaceflight and access to space for manned missions?

In one sense, Option 4B was rejected because that option was to send humans back to the Moon. NASA and Congress have opted to instead send humans beyond Earth orbit, either an asteroid or to Mars.

In a larger sense, Option 4B lives on in part in the Space Launch System. Shuttle-derived components are an important part of SLS.

After several years of ongoing relationship with NASA, the DIRECT Team is pleased to see that many of the principles that defined our Jupiter HLV design have found application in NASA's new flagship launch vehicle, the SLS.

While we are disappointed that the agency has chosen to introduce costly additions to the heavy-lift design, rather than make maximum utilization of existing components, technology, and infrastructure, we are pleased that the Administration, Congress and NASA have found common ground and charted a course forward for our nation as we move beyond the era of the Space Shuttle.

As we look forward to that future, the entire team offers our very best wishes to NASA as the agency embarks on a new path of once again leading mankind beyond the confines of Low Earth Orbit; back to the Moon, on to Mars, and then beyond, into the deepest reaches of our vast solar system.

DIRECT Team Declares Success and Looks to the Future

The DIRECT Team congratulates and applauds the President, Senate, and the House of Representatives for passing legislation enabling NASA to begin work on the Space Launch System Heavy Lift Launch Vehicle, based on existing Space Shuttle components.

As pointed out, NASA wants to go beyond Earth orbit. THAT is the problem. They are losing taxpayer support with every discussion about Mars because no one has ever given a reason for going to Mars that means anything to people not trying to protect their aerospace/NASA job. People are scared the economy will collapse next Tuesday, if not sooner, and NASA wants to go to Mars. This comes across as out of touch on so many levels. What they (taxpayers) need is to hear someone talk about BENEFITS in a way that allows them to feel confident about the expense. Sort of like trying to talk the entire country into taking an expensive camping trip. Technically neat concepts like DIRECT will not, by themselves, generate that confidence.

Not the answer you're looking for? Browse other questions tagged rockets nasa crewed-spaceflight hllv shuttle-derived or ask your own question.

14
How were vibrations supposed to be handled in an Ares I?
1
What is the latest GSO capacity for the Russian heavy launch-vehicle Proton-M?
8
Why did NASA design the SLS do the job of both the Ares I and Ares V?
9
Could the Space Shuttle orbiter have used the Energia HLLV (used by Buran)?
2
Identify this astronaut and shuttle mission
9
Why aren’t rocket stages modular and interchangeable?
15
Why do we need dedicated launch vehicles for small satellites?