What is the "space grease" used to lubricate the ISS robotic arm? What are the material considerations for it?

"And so," she continued, "of course, a mechanical component like that has grease and lubrication. And what the engineers think at this point is that my hand just brushed up against some of that when I was installing that foot restraint."

So, while a "contaminated spacesuit glove" might seem mysterious or dangerous, it looks like the glove just has some grease on it from Canadarm2. Koch said during the webcast that the gloves are now being analyzed inside the space station and the contaminated glove is "just a little it stained."

The only vacuum compatible radiation resistant grease I know of is Apeazon-L (2x10-11 Torr at 20° C, Silicone & Halogen Free), and the MSDS lists the chemical CAS No.: 8009-03-8 which is also the ingredient listed for Vaseline, which is Petrolatum, though the Apeazon-L is a darker color.

Related (and both currently unanswered):

The lubricant is a Braycote vacuum grease: Braycote 602-EF. 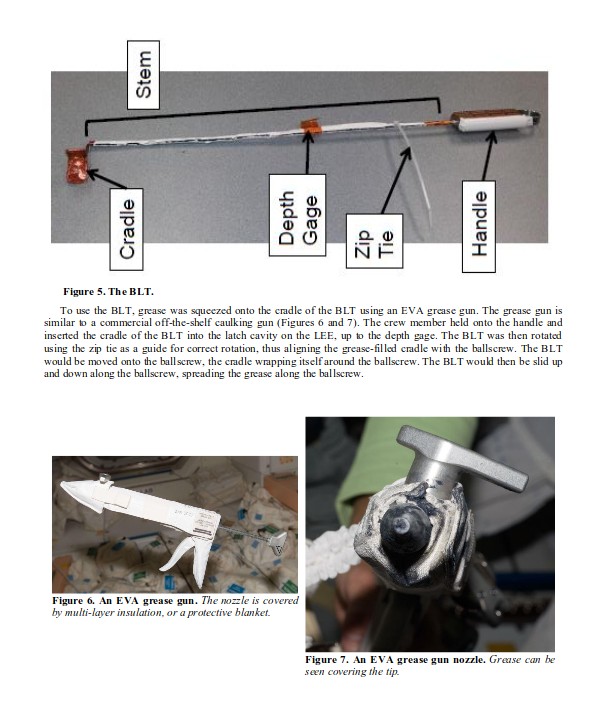 Here are specifics on the grease. (Technical data sheets are also available at the first link in the answer)

Braycote 602EF is a smooth, buttery, gray colored NLGI #2 grease. The base fluid (Brayco 815Z) is a stable perfluorinated polyether with exceptional chemical resistance, extremely low volatility, and a wide temperature service range. The gelling agent is a tetrafluoroethylene telomer. This grease contains molybdenum disulfide. Braycote 602EF is nonflammable, does not use any chlorofluorocarbons (CFC's) during product manufacture, and is in general, chemically inert. Braycote 602 is an excellent lubricant, has good shear stability, and low acute toxicity.

As with any high performance material, being used in critical applications, one should never contemplate its use without being familiar with its typical properties.

Braycote 602EF is designed to operate in the presence of fuels, oxidizers, and deep space vacuums. Typical applications include ball and roller bearings, gears, electrical contacts, and as an assembly lubricant for "O" rings and elastomers. This grease is highly recommended in applications where temperature extremes and/or low vacuums are routine. Perfluorinated greases, such as Braycote 602EF exhibit excellent shelf life due to their intrinsic inertness.

Braycote 602EF is compatible with most commonly utilized materials, plastics and elastomers. It may be adversely affected by Lewis Acid catalysts such as aluminum chloride, at elevated temperatures. Newly exposed rubbing surfaces of aluminum, magnesium, or titanium alloys may react with Braycote 602EF under certain conditions. Such systems should be thoroughly evaluated. Surfaces must be well cleaned or organic rust inhibitors prior to grease application to insure proper lubrication. This product is not recommended for use in applications under high vacuum with loads exceeding 100,000 psi for extended periods of time. Special mention about the molybdenum disulfide in this product:

Braycote 602EF is unique among the Braycote family of products because it contains a fine particle dispersion of MoS2.

For example, would the MoS2 catalyze corrosion with certain metals, such as copper based alloys. We have never heard of any customers using this product to encounter problems that were specifically the result of the MoS2. We do believe that MoS2 is a very stable compound and not likely to react with a metal surface. However, some applications do involve elevated temperatures at the point of contact and those temperatures theoretically, could become high enough to degrade the MoS2 which then could lead to some type of chemical reaction.

The other concern is that the MoS2 could be somewhat abrasive when used against soft metals, and the generated metal particles could themselves corrode. We don't know of any instances where this actually happened but we only want to point out this possibility. Extreme performance and what it means:

This product, with the molybdenum disulfide, means that if the product is exposed to extreme temperatures, and far above the normal use temperature of the product, and the lubricant is destroyed, it is hoped that the remaining moly disulfide will serve as a dry lubricant for a short period of use.

In general, the family of Braycote greases are not good moisture barriers or at inhibiting corrosion. Braycote 602EF does not contain a corrosion inhibitor, but Braycote 601EF does. So if corrosion of a concern, perhaps Braycote 601EF should be considered instead. Packaging:

The composition of this product is a mixture of small PTFE particles (which won't dissolve in anything) and a perfluorinated polyether liquid. We have found that Castrol® Fluoroclean™ HE is an effective solvent for the liquid component of the formulated composition and aids in the removal of the grease from places where it is no longer needed or wanted.

The same grease has been used to lubricate the ISS Solar Alpha Rotary Joints.

Not the answer you're looking for? Browse other questions tagged iss optical canadarm or ask your own question.

25
How do satellite motors keep themselves cool and lubricated?
25
How serious a problem can outgassing of satellites be?
13
How fast do optical surfaces get dirty or damaged in space?
6
Riding a bike on the moon
9
Why is the Aeolus space laser losing power so quickly?
4
Do vacuum-grade oils and greases trivially solve the "lubricants don't work in space, cold welding happens" problem (for short to moderate duration)?

0
What are the regulations about ISS access for research?
7
How many different walk-off maneuvers can the ISS robotic arm do?
1
What material is used on the ISS for conducting electricity?
3
How many ISS robotic manipulators are shown in this image, and what are their names?
5
Are robot arms ever used for attitude control in space?
5
How old are the EVA space suits that are currently used on the ISS?
9
Are mechanical pencils used on the ISS?
12
How was the Space Shuttle Orbiter used for ISS Reboost?
55
How did Canada come to be the robotic arm people?