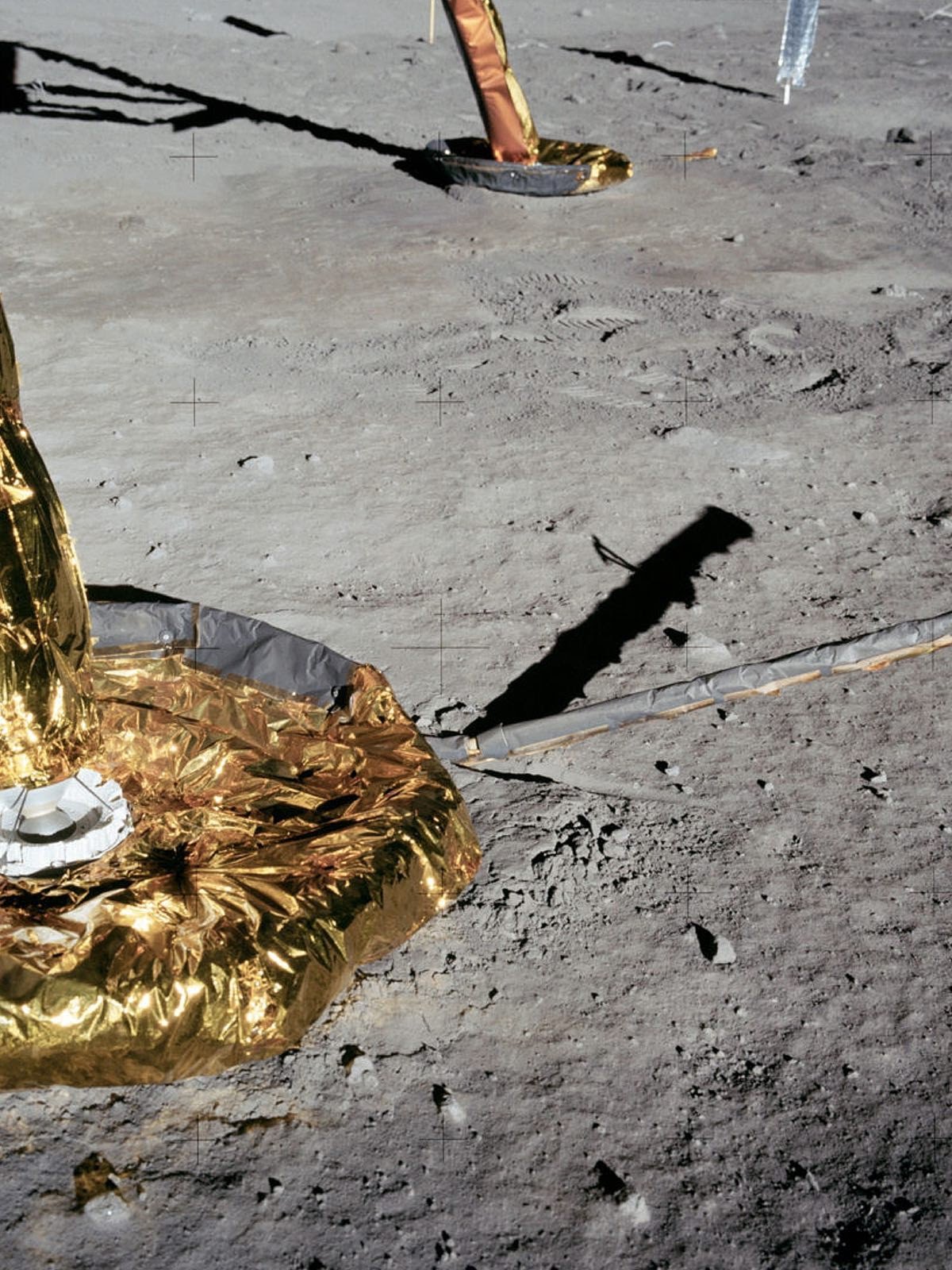 How does the lighting in this photo work? It is strange.

This is the Apollo 11 photo designated AS11-40-5925, a popular shot with moon landing deniers.

The camera is facing generally north-north-west. The sun is low in the sky, about 10º-15º above the horizon on the east. The silver pole in the upper right of the photograph is pretty much straight up, casting shadow in the expected direction. The landing leg in the upper center is tilted away from the sun angle somewhat, not enough to significantly change the direction of the shadow. This is all really straightforward.

The confusing part is the probe in the right foreground. These probes hang down from the footpads of the lander, and when one of them touches the lunar surface, they activate an indicator in the cabin, alerting the crew that the LM is within about 2 meters of the surface. When the pad comes down to the surface, the probes are bent away in unpredictable directions depending on which way the LM is drifting at touchdown, as discussed in this QA.

In this image, the probe is bent outwards, generally toward east-north-east. The probe extends out of frame to the right; it's about twice as long as the diameter of the footpad. Since it's mostly pointing towards the sun, the shadow is severely foreshortened -- the shadow is cast nearly down the length of the probe. That’s why the angle of the shadow appears so different from the others.

Here's a quick reproduction of the situation with a couple of chopsticks stuck in a piece of styrofoam, lit by a single light, with shadows appearing to fall in very different directions: 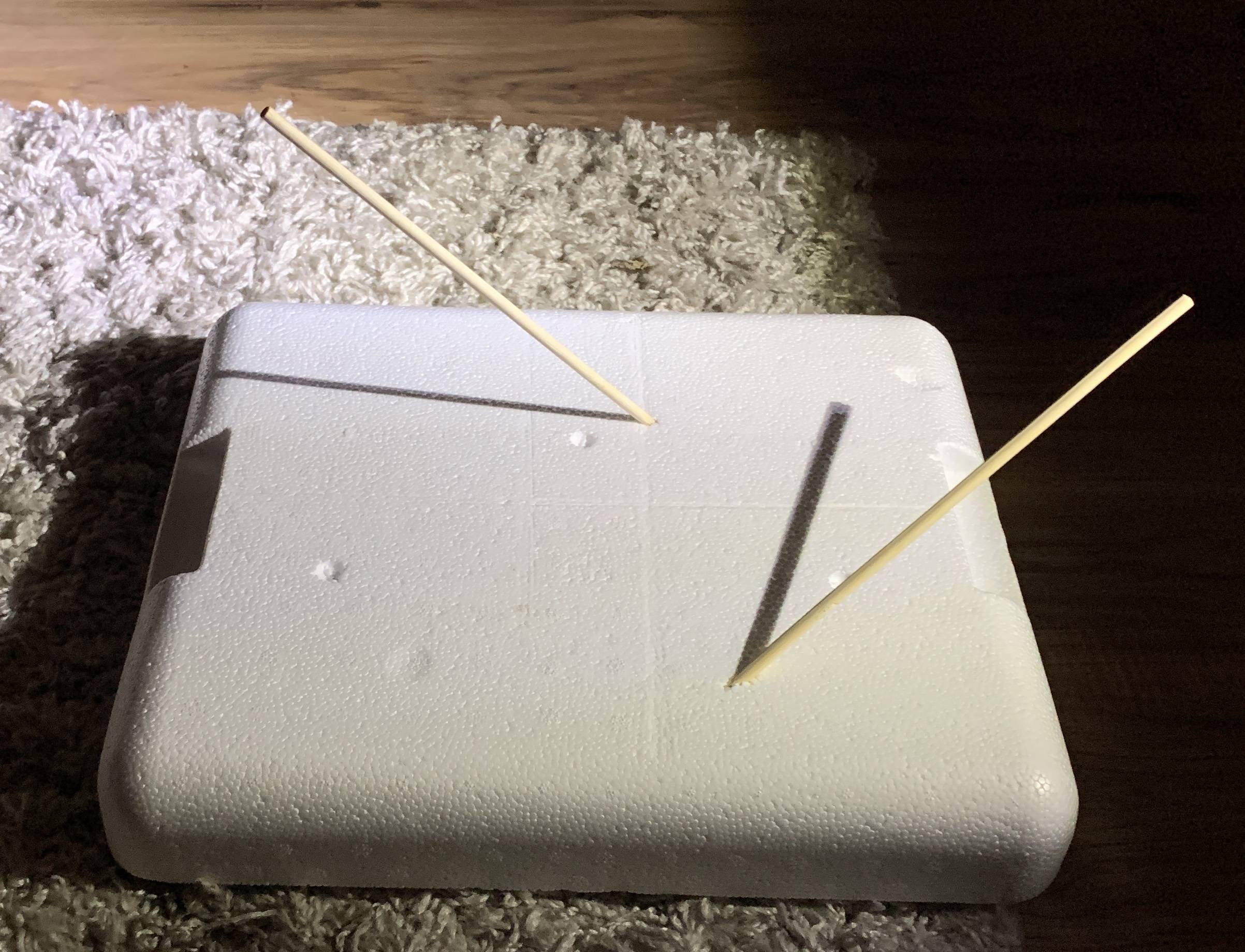 It’s not a perfect match for the Apollo photo —- it’s taken from a higher angle. However, it does demonstrate that the direction the probe points can drastically change the direction the shadow extends over the surface.

Here's what the configuration looks like from above with additional lighting: 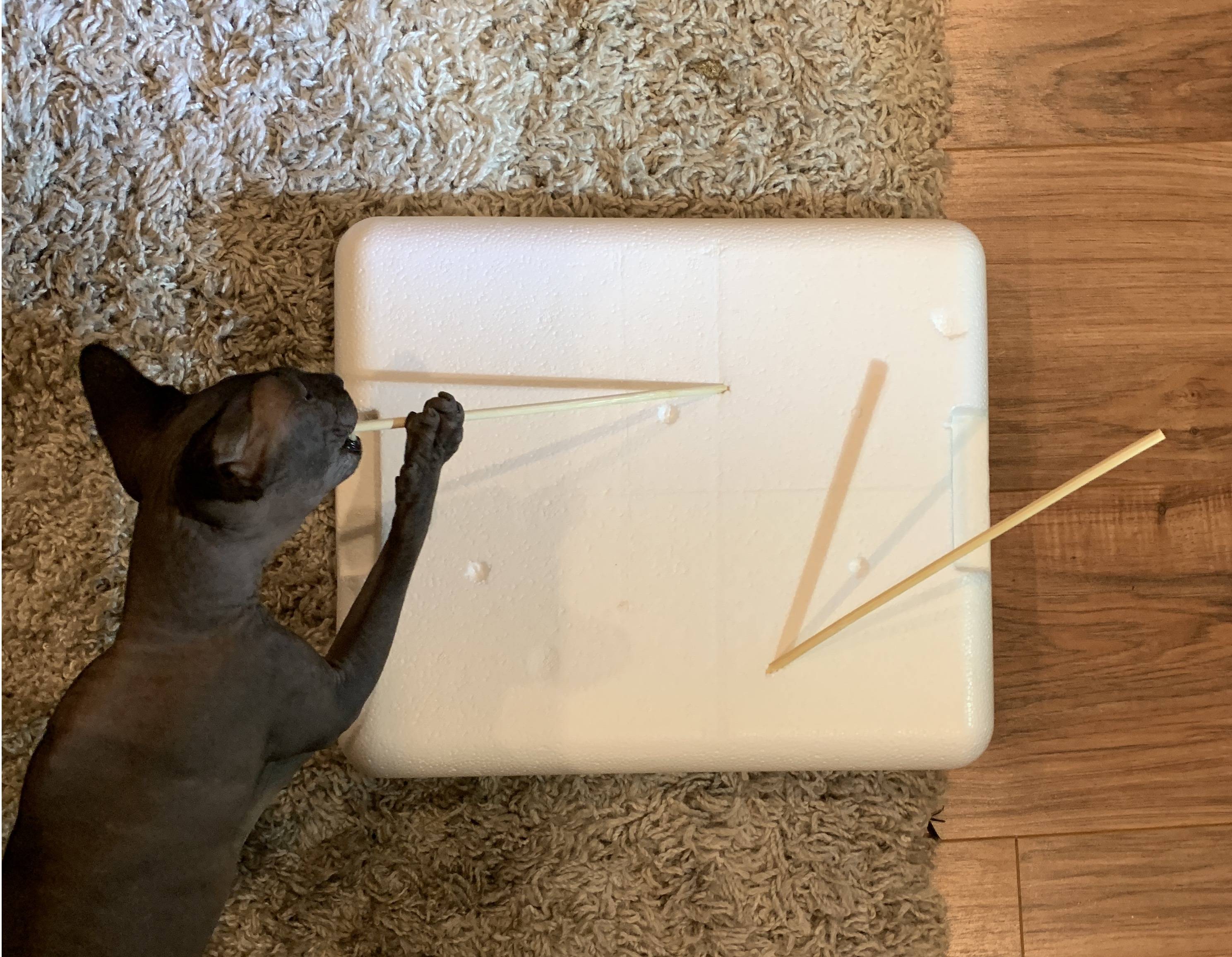 NASA has no explanation for Karloff the giant moon cat, however.

Not the answer you're looking for? Browse other questions tagged the-moon apollo-program or ask your own question.

32
Why were contact sensors put on three of the Lunar Module's four legs? Did they ever bend and stick out sideways?
61
Which Apollo "mystery" was said to be finally solved by a better rendering engine?
34
How did the Lunar Module dock with the rest of Apollo 11 and what is the "CSM"?

26
How was dust-mitigation addressed during the Apollo program?
3
What's the story behind this Apollo-era image?
24
How exactly did the floor of an Apollo LM look like after EVA(s)? Seeking photo!
6
Did Apollo-11 astronauts rehearse their photoshoots on Earth?
2
How exactly does this Apollo astronaut's tool work? What was it called?
5
Help understanding this Apollo 11 docking probe image, what are we looking at, and from where?
26
Why is the Apollo LEM ladder so far from the ground?
10
What antenna is this in an Apollo 15 LM photo?
9
Did Apollo astronauts play on the Moon their pre-recorded music?
4
Who are these people inside Apollo Command Module (presumably posing for advertisement photoshoot)?