How was the Space Shuttle Orbiter used for ISS Reboost?

According to this answer, for the question How often does ISS require re-boosting to higher orbit?,

During Space Shuttle years, small re-boosts were also performed by the Shuttle Orbiters (according to Wikipedia, they had 232 kg of fuel available for that)...

Which engines did it use for this purpose? I think, using the forward or rear reaction control thrusters would cause lateral stresses on the docking port, due to the torque provided, since the thrust vector doesn't pass through the centre of mass of the whole system (ISS+Space Shuttle Orbiter). Or in other words, if these engines are fired they will cause the ISS to spin about its centre of mass, in addition to the re-boost (which will be less effective as at some time the engines will fire retrograde due to the spin).

The following image shows the Space Shuttle Endeavour docked to the International Space Station (ISS), flying at an altitude of approximately 354 km (220 miles), and was taken by Expedition 27 crew member Paolo Nespoli from the Soyuz TMA-20 following its undocking on May 23, 2011. 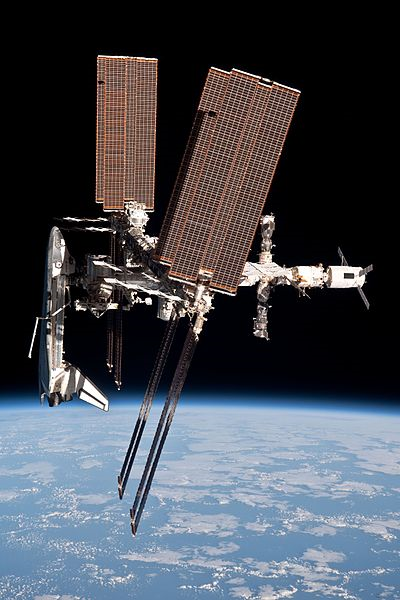 It can be seen, that neither forward or rear reaction control thrusters can't be used alone. They must be used in addition to other thrusters to nullify the torque, and I think that will be an energy-intensive process. Instead, they could have transferred the fuel from the orbiter to the propulsion module of the station, where the thrust vector is along the centre of mass and doesn't cause any torques. I think, there were no thrusters powerful enough facing the heat shield side to provide orbital re-boost. So, How was the Space Shuttle Orbiter used for the same?

No propellant was ever transferred from the Orbiter to the ISS.

The steps for executing the reboost were called out in the Flight Plan. Here's an example from STS-130. Note that it was done at the very end of the docked phase (straddling the Farewell ceremony). 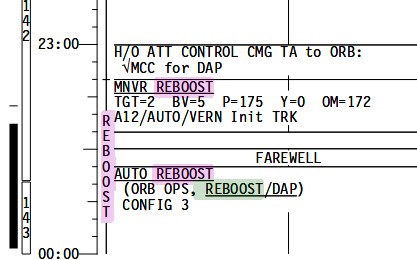 This procedure is number 3.110 in the International Space Station ISS/Shuttle Joint Operations Book and takes the following actions:

The next procedure MNVR REBOOST maneuvers the stack under Orbiter VRCS control to the reboost attitude specified on the 2nd line and sets the Digital Autopilot (DAP) to maintain that attitude. The Orbit Ops Checklist shows a diagram of the attitude. Note Configuration 3 is called out in the Flight Plan (for the next step). 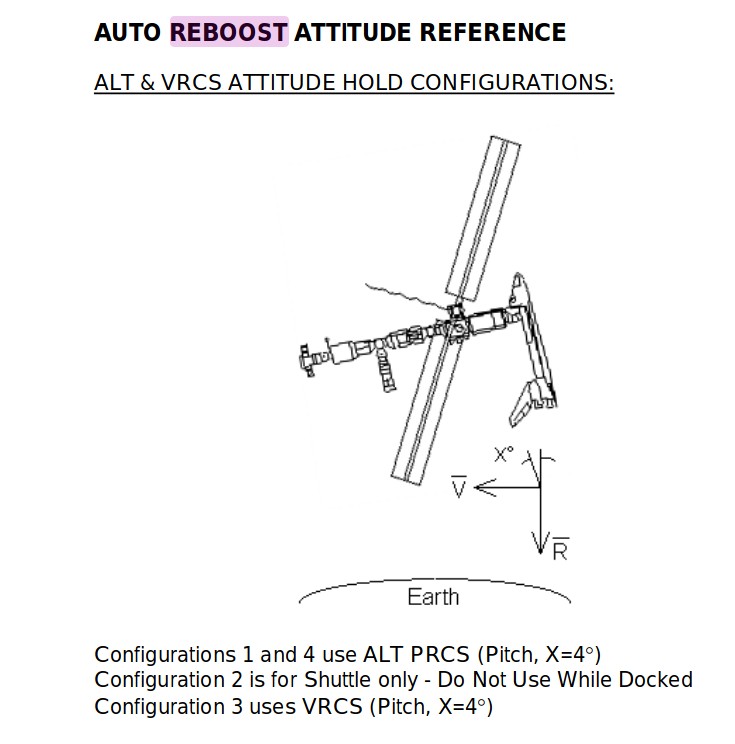 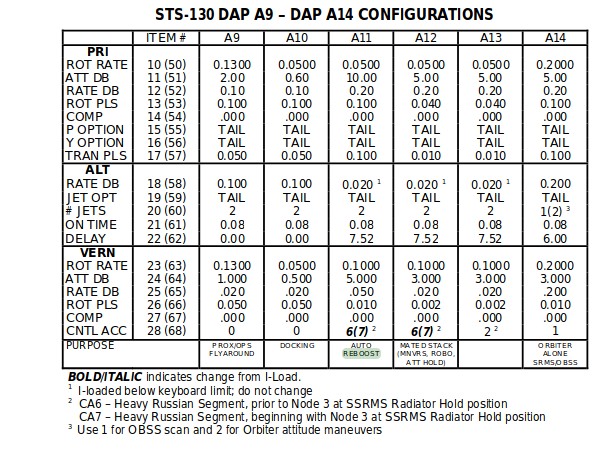 Two down-firing jets were used simultaneously on this flight.

Other VRCS jets fired as needed to control undesired rotations of the stack and maintain the commanded attitude.

After the reboost was complete, control of the stack was handed back to the ISS control system.

Not the answer you're looking for? Browse other questions tagged iss space-shuttle reboost or ask your own question.

48
How often does ISS require re-boosting to higher orbit?
27
Why aren't RCS openings an issue for spacecraft heat shields?
10
How hard was it for the Shuttle to perform attitude control for the entire ISS? Did they have to calibrate?
6
Space Shuttle Orbiter VRCS
3
Crew Positioning in ISS during Reboost
3
Do standard procedures for securing the ISS before an orbital boost burn include making sure that at least large objects are securely "strapped down"?
6
Can a spacecraft be "too large to dock" to the ISS?

19
How much fuel was used for a Space Shuttle launch?
23
How often, if ever, was "software" updated in the shuttle orbiter?
20
Was the third shuttle engine any different from the others?
3
ISS Induced Spin during Altitude Correction Boost
5
No reboosts for the ISS
6
Space Shuttle Orbiter VRCS
10
How hard was it for the Shuttle to perform attitude control for the entire ISS? Did they have to calibrate?
0
Bipropellant RCS systems: Do they go together with docking? Or with manned spaceflight?