How do we use Fire Extinguishers to Control Fire in the Space Station?

In this NASA Webpage for Fire Prevention in Space, it is given that

If a fire were to occur on the ISS, the astronauts would become firemen and follow a three-step response system.

First, they would turn off the ventilation system to slow the spread of fire. Next they would shut off power to the effected unit. Finally astronauts would use fire extinguishers to put out the flames.

First two steps are fine. I am unable to understand, Why are we using fire extinguishers to control fire in the ISS? We know that, due to the high velocity of the extinguishing fluid ejected in one direction, due to Conservation of Linear Momentum or Newton's Third Law, the astronaut will be pushed in the opposite direction (Credits to Gravity).

Here on Earth, we are able to point the extinguisher in the right direction with the help of friction provided by the ground. How do astronauts in space manage to stay firm while using the fire extinguisher, as both of their hands which they use primarily for stability will be busy using the extinguisher? I don't think they can maintain stability only by using their legs. Will a second astronaut hold the one using the device or anything like that? Further, in space, I think even fire floats. If we use fire extinguisher will that blow the fire bubble away? I know this sounds silly, but I think they must have taken this into consideration. Are there any alternatives for extinguishing fire without these problems stated here?

The ISS, Shuttle, and Mir have all had hand-held fire exinguishers. Mir actually used them. Shuttle also had built-in fire extinguishers in the avionics bays that were discharged remotely. 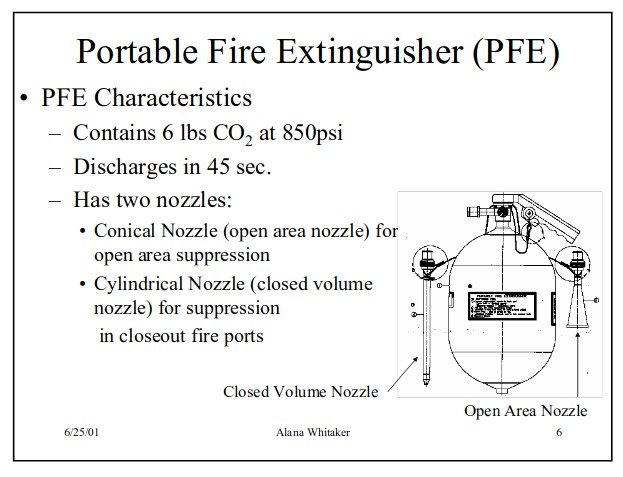 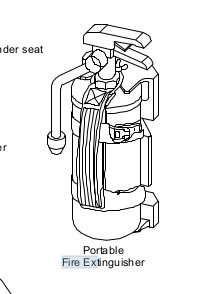 I think you over-estimate the difficulty of using them. Their nozzles are not optimized for maximum thrust. The crew would use the nearest foot restraint loop or brace themselves against structure. They normally can maintain stability using only their legs - but other crew members could assist if required - the article on the Mir fire does state

Crew members took turns using extinguishers to put out the fire, with at least one astronaut needed to hold the user in place so that they did not move backward in the absence of gravity.

In space a fire would self-extinguish because there is no convection. But a fan running or other ventilation source can keep it going. The Mir fire involved a chemical oxygen generator that was blowing oxygen right into the fire! Small fires on Shuttle were mostly smoldering types that were easily put out.

9
What happens after a crew finishes putting out a fire?

8
How are the US and Russian ventilation systems separated on the ISS?
20
How do iPads on the ISS know which way is "up" for their users?
7
How will Robotic Refueling Mission-3's liquid methane tank remain full for six months without any boil off?
13
How was the Space Shuttle Orbiter used for ISS Reboost?
4
Has a fire alarm/emergency at mission control interrupted operations?
3
Do standard procedures for securing the ISS before an orbital boost burn include making sure that at least large objects are securely "strapped down"?