What happens after a crew finishes putting out a fire?

I was reading the question How do we use Fire Extinguishers to Control Fire in the Space Station?

This got me thinking about how the crew would clean-up after a fire. How do they decide if the station is still inhabitable and how do they get the goop non-mass-less substance that comes out of the fire extinguisher off critical space station parts/out of their atmosphere? Would an evacuation be performed even if the fire didn't seemingly damage critical parts?

A spacecraft fire is an extremely serious situation. Even if no serious damage is done to spacecraft systems, the cabin atmosphere is likely to be highly contaminated by toxic combustion products and possibly by whatever substance the extinguishers use.

For shuttle, a serious cabin fire would result in a early deorbit case if the cabin atmosphere could not be cleaned up in a reasonable amount of time.

I'll walk through the procedures for the case of a fire in a shuttle avionics bay and explain the rationale along the way. Please refer to this overview flowchart. 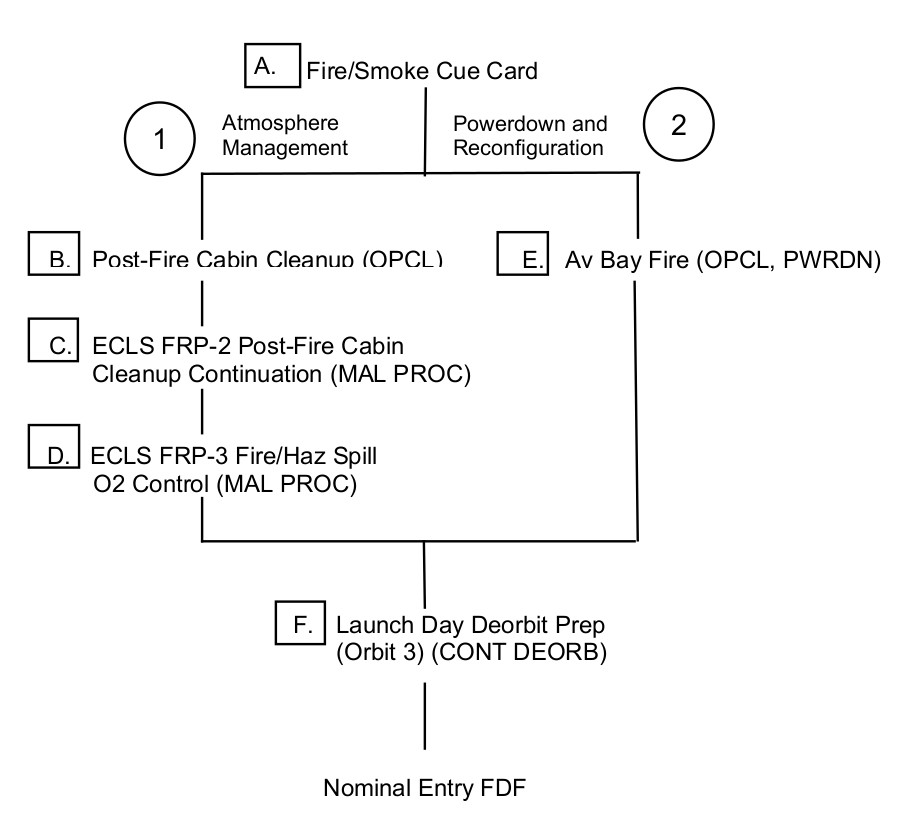 The crew was alerted to the presence of a fire when the built-in smoke detectors triggered. This caused a loud audible alarm, messages on the computer screens, and illumination of lights on panel L1. 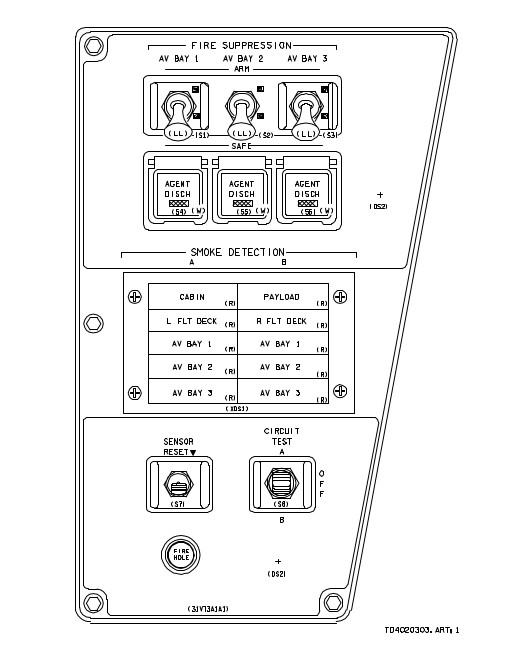 The crew used the Fire/Smoke Cue Card to eliminate the possibility of a false alarm. If confirmed, the crew put on Quick-don Masks (QDMs) and opened the oxygen valves supplying them with O2. They then discharged a built-in fire bottle into the affected avionics bay using the switch and button on panel L1. They then split into two teams following parallel procedural paths as show in the flowchart. One team heads off to clean up the cabin atmosphere, the other to powerdown and reconfigure equipment in the affected avionics bay. Since this question is about cabin atmosphere cleanup, I will focus on the first procedural path.

Even aside from the combustion products, there are serious implications to the actions already taken.

The crew first measured the amount of contaminants in the atmosphere using a handheld device called the Compound Specific Analyzer - Combustion Products (CSA-CP). This device measured the amount of O2 (%), Carbon Monoxide, Hydrogen Cyanide, and Hydrochloric Acid in the air (these last in parts-per-million). They are reported to the ground and recorded in a table in the flight data file.

The crew then installs a fresh Lithium Hydroxide canister in the atmosphere regeneration system, and a special Ambient Temperature Catalytic Oxidizer canister in the second slot. This canister works to remove Carbon Monoxide.

The shuttle toilet was activated to flow air through its charcoal filters to help remove other contaminants. Also, a purge of the affected avionics bay overboard through the vacuum vent line was set up.

The implications of staying on the QDMs then set in. To control the O2 concentration below the flammability limit and remove remaining contaminants, the cabin must be depressurized to 8 psi and a constant overboard purge set up. The purge is done through the airlock depressurization valve with the airlock inner hatch left open. Dropping the cabin pressure to 8 psi forces additional equipment powerdowns due to the reduced effectiveness of air-cooling at the lower density.

If the situation has gotten this far and the atmosphere can't be sufficiently cleaned up, the crew will have to prepare for an early deorbit. Depending on what the consumables that are being flowed overboard for the purge can support, an Emergency Landing Site (ELS) may have to be chosen. Every effort would be taken to make a Primary Landing Site (PLS) though - Kennedy Space Center or Edwards Airforce Base.

It was possible to back out of the procedures if the atmosphere was cleaned up sufficiently, but concerns about unknown damage to equipment in the avionics bay would likely still force an early landing.

On February 24 1997, on the Mir space station, fire ignited in the solid fuel oxygen generator in the Kvant-1 module.

Nasa astronaut Jerry Linenger was on board the station at that time. Here is an excerpt of an interview that took place two months later, on March 21st (emphasis mine):

Afterwards, being a physician I was very concerned with crew health. We set up a station for any respiratory problems that might take place, we had all the emergency gear in place. I did exams on all the crewmembers immediately following the fire and then for 24 and 48 hours after that looked at oxygen saturation in the blood, checked the lungs, all the normal things you would do post-fire. From my assessment, I don't see where anyone had any serious inhalation damage and it was due to good action by the crew to get into the oxygen masks quickly.

From a later interview, June 13 (3 weeks after returning from the station, emphasis mine):

and when the fire’s out, it was a relief, of course, but also the next thing we had to do was try to conserve the oxygen supply, and so we actually had to just not talk, just lie there and try to breathe quietly and try to relax. So the difference in intensity was remarkable. I slept at night, I wasn’t up at night biting my finger nails

Note that this bit may be specific to the 1997 Mir fire, as they lost the Solid Fuel Oxygen Generator, so the station would struggle a bit with a crew of 6.

They put the fire out in 90 seconds, but the smoke remained for much longer, so they had to wait for the Mir systems to slowly scrub it out.

There apparently had been another fire of the same oxygen canisters, in a Salyut station, before Mir, but I could not find a single other mention of that Salyut fire, let alone a description of the procedures taken after it.

Also, there had not been a Russian space station fire event of this magnitude ever before. There had been a smaller oxygen generator fire onboard Mir’s precursor, the Salyut, but it had entailed the burning of a generator’s cloth covering. This fire had involved the generator’s chemical core.

Flight Surgeon Tom Marshburn later remarked that had NASA previously asked the Russians, "‘So, have you had problems with this device?’ they probably would have said, ‘No. We’ve been using it for this many years and really haven’t had any problems.’" In Marshburn’s opinion, "You would probably have to talk to them for a while before they said what that little incident was on Salyut, because they really would feel like it was not a big deal."

According to Star Crossed Orbits, there were apparently multiple fires that happened in the various Salyut stations, but that doecument does not include post-fire procedures.

Not the answer you're looking for? Browse other questions tagged space-shuttle space-station emergency procedure or ask your own question.

2
How do we use Fire Extinguishers to Control Fire in the Space Station?

32
What are the procedures aboard the ISS in the eventuality of a loss of a crew member?
2
Space Shuttle RTLS in 3-engine-out: what does it use for propulsion?
25
What happens to astronaut sweat on the ISS?
4
What happens if you jump on a “spin ship”?
14
Did the U.S. Space Shuttles have a way for crew to bail out?