Bringing an asteroid into reasonably low Earth orbit--can it be done?

Assume plenty of delta-v is available but it's very slow.

At first glance it looks easy enough, get capture and spiral in. However, we have that big bully in the sky, aka Luna. Is it possible to bring an asteroid in to a lower orbit assuming a very low acceleration? Obviously you have to stay far away to avoid going splat or even getting tossed about by the moon.

If you're using chemical rockets that would mean propellent mass comparable or greater than the asteroid mass. A quick chart: 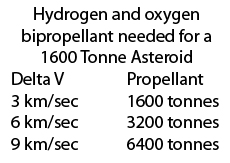 It's quite plausible to have solar powered hall thrusters with an exhaust velocity of 30 km/s. However given Hall thrusters and solar panels of reasonable mass, acceleration is excruciatingly slow even for a relatively low mass asteroid.

There are near earth asteroids that already pass close to the earth/moon system. If nudged early enough in their orbit they can be made to pass through the earth's sphere of influence with relatively little delta V. And there is a lot of time to accomplish the nudge so high ISP ion engines can be used to accomplish the first step.

Once in earth's sphere of influence and if the moon is in the right position, a lunar swing by can be used to shed velocity making a hyperbolic orbit into an elliptical capture orbit. 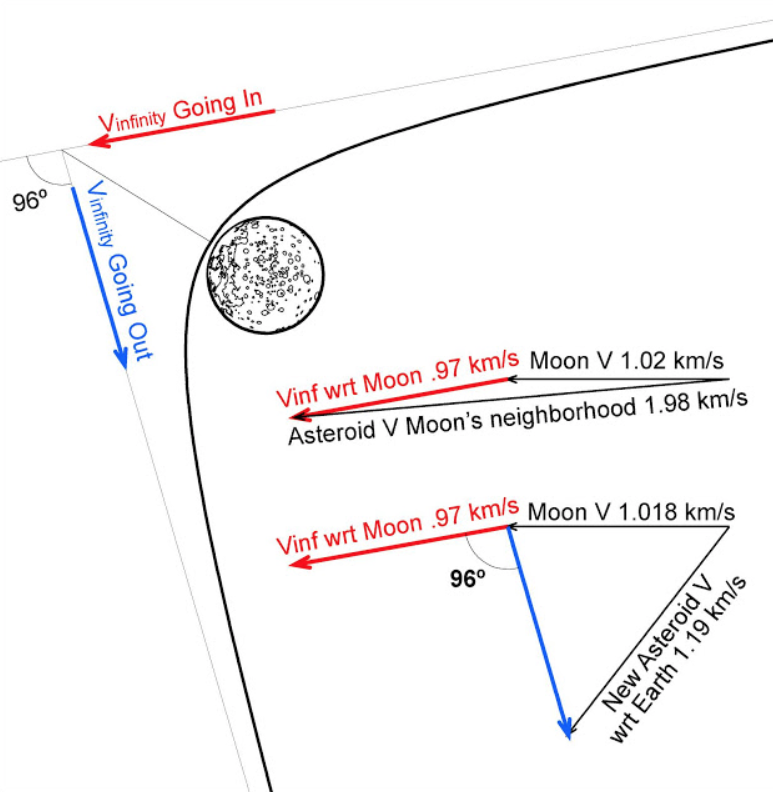 Above is an illustration how a lunar swing by can drop an asteroid's velocity from around 2 km/s in the lunar neighborhood to 1.2 km/s which is below earth's escape velocity at that distance from earth.

On the bottom of page 15 of the Keck Report they talk about safety. They specify retrieving a small carbonaceous asteroid that would burn up harmlessly in the upper atmosphere should it go off course and impact the earth.

The also specify parking the rock in a loose lunar orbit so it'd be a good distance from earth, another safeguard against impact.

These safety measures work against your scenario of an ore body in low earth orbit.

Also to get from a loose escape orbit to a low earth orbit takes a lot of delta V. A general rule of thumb going from coplanar orbits with a low thrust trajectory is subtract high orbit velocity from low orbit velocity. See Adler's answer to my question General guideliness for modeling a low thrust ion spiral

So this means you need a delta V budget in the neighborhood of 6 or 7 km/s to spiral down to LEO. If using chemical that would mean using about quadruple the mass of the asteroid in propellent. If using ion I'm guessing it would take centuries to spiral down.

So I'd say it's not plausible to park an asteroid in LEO.

It is plausible, in my opinion, to park a rock at EML2. Which would be a great place for a water rich carbonaceous asteroid. A potential propellent source at EML2 would be a possible game changer.

Even if it is possible we should not do it.

Low Earth orbits do decay over years, decades, centuries or millennias. Low orbits decay faster than higher orbits. If we do not want the asteroid to hit the surface of Earth sometime, we have to do station keeping forever.

Only a very small asteroid would fully disintegrate during atmospherical reentry but not a larger one.

Not the answer you're looking for? Browse other questions tagged orbital-maneuver asteroid or ask your own question.

8
Can one put a large nickel-iron asteroid into an elliptical solar orbit that results in a soft(ish) earth landing?
10
Can an asteroid enter Earth orbit?
9
How can a planet “catch” an asteroid?
2
How much asteroid can we divert from the Earth?
9
What is the delta-v required to get a mass in Earth orbit into the sun using a SINGLE transfer?
2
Could ejecta from asteroid Bennu enter into temporary orbit around it? If so, how?
5
What is the closest asteroid to Earth worth mining?