Which type of Power Plug do we use on the ISS?

The following map shows the different types of power plugs and sockets used by countries all over the world: 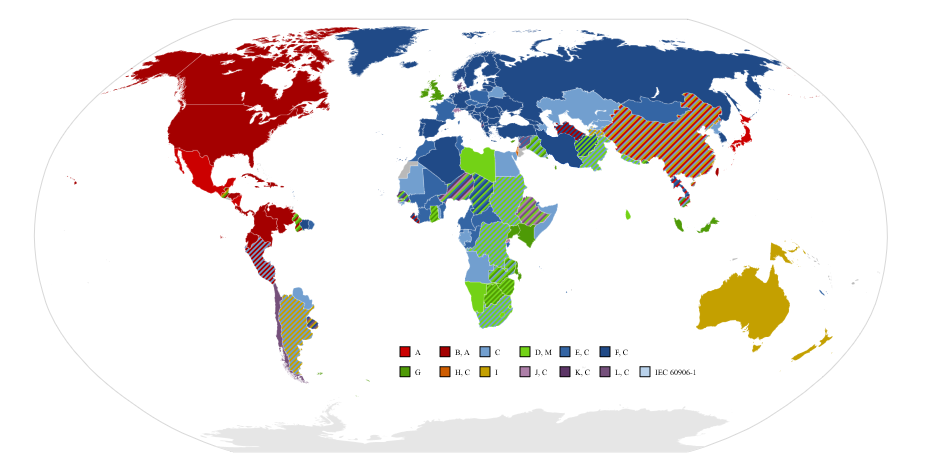 The International Space Station (ISS) is a joint project between five participating space agencies: NASA (United States), Roscosmos (Russia), JAXA (Japan), ESA (Europe), and CSA (Canada). Clearly, from the above map, it can be seen that almost all these agencies have different types of power plugs and sockets.

Which type of power plug do we use on the ISS? Do we use different types on the Russian Orbital Segment (ROS) and the United States Orbital Segment (USOS) of the ISS? Or did all countries agreed on a new "International Type" to be used as a standard for the ISS? If yes, do astronauts and cosmonauts carry International Adapter (or Universal Adapter, or Travel Adapter) like we do when we fly to different countries? I think they will be having adapters on the ISS itself because even though these are of less mass, why to unnecessarily waste the energy every time?

Browse other questions tagged iss electronics or ask your own question.

7
Why was the ISS' DC vacuum cleaner replaced with an AC version? Are there “wall sockets” throughout the ISS where it's plugged in?

30
Have any animals that have been studied onboard the ISS come back alive?
5
International Collaboration on Large-Scale Manned Space Exploration Projects
8
What CAD system do the ISS designers use?
5
What type of electrical wiring provides the longest life in space?
7
Why was the ISS' DC vacuum cleaner replaced with an AC version? Are there “wall sockets” throughout the ISS where it's plugged in?
6
What are the ISS's eight “power channels”? How do they work?
27
How are astronauts in the ISS protected from electric shock?
6
ISS attitude yaw pitch roll conventions. Which one to use?