Technical feasibility of a country at least partially preventing use of internet from satellite constellations?

The interesting Politics SE question To what extent can a government control satellite internet compared to internet from a local ISP? asks from the perspective of politics and international law, but here I'd like to ask about technology.

The jamming of short wave radio news broadcasts has a long and colorful story, but there are several differences between that technology and blocking satellite constellation-based internet access.

Those satellites will be transmitting tens of watts only, and only over distances of hundreds of kilometers.

However signals will take advantage of a far wider bandwidth than a voiced news broadcast over AM radio and utilize substantial error correction and spread-spectrum techniques.

Question: What is the technical feasibility of a country at least partially preventing use of internet from satellite constellations? Consider blocking for large cities or population centers as one example of partial blocking.

update: @lijat points out that prevention doesn't have to be jamming, it can also take the form of detection/prosecution since conventional internet protocol use requires bidirectional communication; to get something using a satellite server (or whatever they are called), you have to request it and probably do some other handshaking.

Ideally, an answer should be based on citable studies or basic engineering principles (e.g. power-bandwidth product) rather than oratory or generalizations.

With the development of phased-array antenna's, blocking of satellite communications will become increasingly difficult to impossible. Prosecution of users and/or a ban on importing/using antennas is probably the only feasible option to avoid the majority of people from using the service.

When receiving, you use the phased array principle to maximise the antenna sensitivity in the direction of the transmitter, while minimising the sensitivity in other directions. This allows you to suppress (intentional) interference. 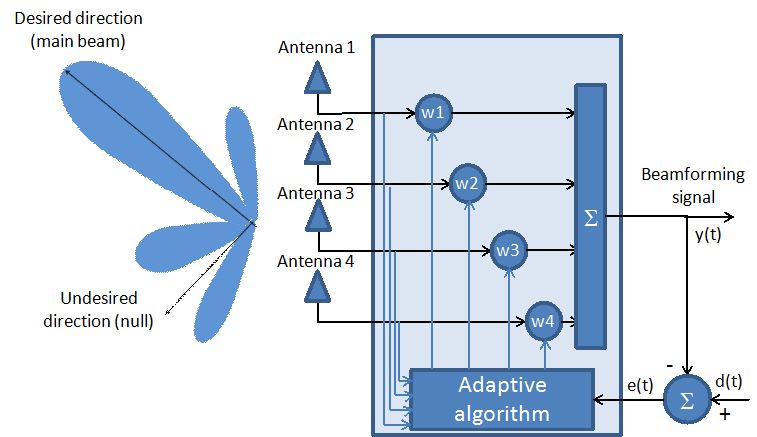 In principle, the more antennas in your array, the more precise you can form the antenna pattern to your liking. With sufficient processing power to adapt the antenna pattern in real-time to track the satellite your communicating with, it is really hard to impossible to block that communication. Jamming sources would be on or near the ground and these can be fairly easily suppressed by an appropriate null in the radiation pattern, so one would need to block the line-of-sight.

Phased arrays with adaptive beam forming are already used for 5G MIMO antennas, so this technology is already sufficiently mature. If you can hide your array from the authorities (both visually and in the RF spectrum by blocking the side lobe signals while transmitting), I don't think it can be blocked.

Not the answer you're looking for? Browse other questions tagged communication satellite-constellation starlink oneweb or ask your own question.