Why is the Duration of Time spent in the Dayside greater than that of the Night side of the Moon for Chandrayaan-2 Orbiter?

The following information is from ISRO's webpage on "Detection of Argon-40 in the lunar exosphere" (Textual information relevant to my question is in bold face):

The Chandra’s Atmospheric Composition Explorer-2 (CHACE-2) payload aboard the Chandrayaan-2 orbiter, is a neutral mass spectrometer-based payload which can detect constituents in the lunar neutral exosphere in the range of 1-300 amu (atomic mass unit). As part of its early operation, it has detected $^{40}$Ar in the lunar exosphere from an altitude of ~100 km, capturing the day-night variations of concentration. $^{40}$Ar being a condensable gas at the temperatures and pressures that prevail on the lunar surface, condenses during lunar night. After lunar dawn, the $^{40}$Ar starts getting released to the lunar exosphere (blue shaded region in figure).

Variation of Argon-40 observed during one orbit of Chandrayaan-2 during dayside and nightside of the Moon. The observed partial pressure has to be refined for the background and other effects to infer the density of lunar exospheric argon. The observations when Chandrayaan-2 was on the nightside is indicated by the black solid rectangle at the top of the panel and the two vertical dashed lines. Being in a polar orbit, Chandrayaan-2 enters the dayside of the Moon crossing the north pole, traverses through the dayside and enters the nightside after crossing the southpole.

Source : Detection of Argon-40 in the lunar exosphere

We know that a satellite in a circular orbit, around a spherical celestial body of approximately uniform density, moves with constant speed (not constant velocity). So we must expect the time spent in the dayside to be equal to that of in the night side of the celestial body.

In the above figure, it can be seen that the duration of the satellite on the night side is comparatively lesser than the time spent in the dayside. I am not sure why this is so. I checked whether the time intervals on the $x$ axis or time axis are uniform or not. Yes! They are uniform. So why is there a huge difference between the duration of time spent in the dayside and night side, by the spacecraft?

To check whether the graph represents the complete data of one full orbit, and for further analysis, I calculated the orbital time period (because no data was available on the Internet regarding this) of Chandrayaan-2 Orbiter, under the following assumptions:

So, Time period $T$ is given by the following formula:

On substituting the values in the above equation for calculating the time period of the satellite, we get:

So, Chandrayaan-2 Orbiter completes a full orbit in about 2 hours. It spends half of this time i.e., 1 hour on the dayside and the other half on the nightside. From this, we can also infer that the graph represents data obtained in one full orbit, as the total time sums up to approximately 2 hours. There is also data consistency between the partial pressure of the gas at the start of the orbit and at the completion of the orbit. But from the same graph, we can see, the time spent on the night side is less than half an hour, instead of one full hour.

So, Why is the duration of time spent in the dayside greater than that of the night side of the Moon for Chandrayaan-2 Orbiter, as seen in the graph?

The degree of orbital shadowing experienced by an orbiting object with small orbital altitude is determined by its beta angle (normally used in reference to LEO objects but the concept applies to lunar orbiters as well).

The angle is taken between the satellite's orbital plane and the vector to the Sun. Depending on the value of the beta angle, a satellite can spend up to 100% of its time in sunlight. 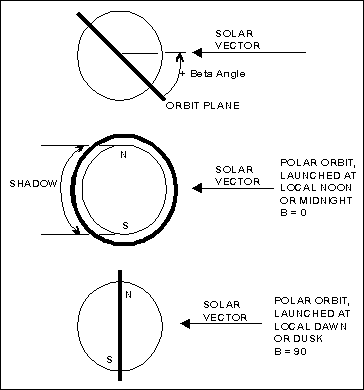 The two extreme cases are:

I suppose a big part of the confusion comes from this statement:

What is most probably happening is that this sentence was written in a completely haphazard way, without any attempt to use precise terms, without even much regard to reality. By nightside and dayside they are most probably referring to whether the satellite is in the sunlight or in the shadow of the moon, not whether it is day or night at the spot on the surface 100 km below the satellite.

The same can even hold true with airplanes flying at 10 km over earth: there are brief periods of time during the evening or the early morning when it is possible to see the sun from your window, but you look down and the surface is dark.

Not the answer you're looking for? Browse other questions tagged artificial-satellite the-moon isro scientific-data chandrayaan-spacecraft or ask your own question.

11
How dark is the side of the Moon in shadow as compared to the side facing the Sun?
3
Are low, polar lunar orbits in general relatively stable?
4
Could a radio telescope orbit Earth-Moon L2 so that it is in the Moon's radio shadow?
20
Could Hubble observe the night side of the Moon?
4
Chandrayaan-2; time taken to get to the Moon
5
How will Chandrayaan-2 reach a polar orbit?
5
Chandrayaan 2: How has life of the orbiter increased from 1 year to more than 7 years?
2
Trajectory Optimization To The Moon (Case Study: Chandrayaan-2)
4
How do they measure the voltage of the Moon?