Does "Air Launch to Orbit" makes the best use of Earth's Rotation?

Usually, all artificial satellites are launched in the prograde direction, since this minimizes the amount of propellant required to reach orbit by taking advantage of the Earth's rotation. Further, by launching from the equator, we can make use of Earth's rotation to the maximum level.

Air launch to orbit is the method of launching rockets from an aircraft after it reaches a certain altitude and direction. This method has some advantages over launching from a fixed launchpad on the ground.

Is launching a rocket from an aircraft along the rotation of the Earth (prograde) beneficial or it doesn't matter? In other words, does air launch to orbit makes the best use of launching in the prograde direction over retrograde direction? If yes, why are we not launching from the Equator to obtain the maximum benefit of Earth's rotation? If the aircraft takes off from a non-equatorial runway, does it gain any additional speed when it travels to the equator? Is the answer dependent on the local wind stream around the carrier-aircraft?

For the sake of reference, the following image shows the Flight Plan for a Pegasus Rocket Launch from the L-1011 Stargazer Aircraft: 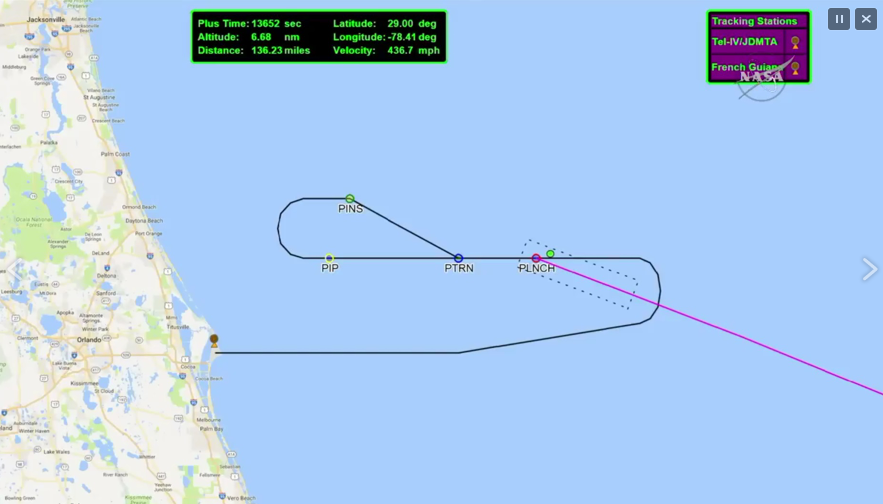 It can be seen the launch (shown by $\mathrm{\color{magenta}{magenta}}$ coloured line) is towards East (not exactly East) or it's prograde.

I suspect that it's much cheaper in jet fuel to use a slightly bigger rocket to make up the 55 m/s, and launch it close to home.

Not the answer you're looking for? Browse other questions tagged rotation air-launch efficiency or ask your own question.

2
Does Jupiter's high rotation speed affect its gravitational strength at the surface?
7
How to calculate the speed of rotation of a given point on the Earth's WGS84 ellipsoid, about its axis?
6
Range safety for air-launch vehicles
4
Should all the Air-Launch systems be deployed at sub-sonic speeds?
6
How much does the rotation of the Earth affect re-entry and could we go against it?
7
Does a change in the rotational speed of something on its own axis (rpm) affect its orbit?