Is the Heliosphere as elliptical as this graphic suggests?

I noticed the following graphic being used in an article discussing the Voyager probes. It also appears on Wikipedia's Heliosphere page: 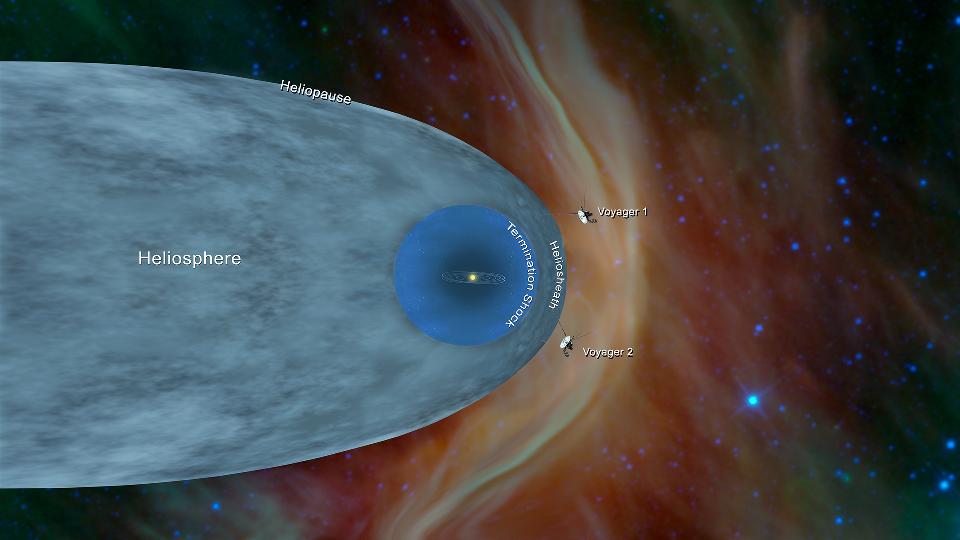 The same page states that:

On a broader scale, the motion of the heliosphere through the fluid medium of the ISM results in an overall comet-like shape. The solar wind plasma which is moving roughly "upstream" (in the same direction as the Sun's motion through the galaxy) is compressed into a nearly-spherical form, whereas the plasma moving "downstream" (opposite the Sun's motion) flows out for a much greater distance before giving way to the ISM, defining the long, trailing shape of the heliotail.

And that makes sense in terms of the overall shape being elliptical. However the proportions in the graphic suggest that the heliosphere's longest span (measured from the sun to heliopause) is at least 10 times as long as its shortest span. Notably (perhaps?) the Termination Shock is only shown as being very slightly elliptical in shape.

Does the sun's motion through the ISM really produce such a significant distortion, or is the graphic not accurately depicting the proportions involved?

..the heliosphere's longest span is at least 10 times as long as its shortest span

The graphic fairly closely matches this peer-reviewed plot with actual numbers instead of eye-candy textures. The termination shock stretches "downwind" twice as far as upwind. The heliopause stretches much farther downwind, but although it's not spherical, it might not be an ellipse either, instead dissipating like the wake of a boat. From p. 450 of G.P. Zank's "Faltering Steps Into the Galaxy: The Boundary Regions of the Heliosphere," Annu. Rev. Astron. Astrophys. 2015, 53:449–500:

The heliosphere ... extends >120 AU in the direction of the Sun’s motion through the ISM and perhaps tens of thousands of astronomical units in the opposite or heliotail direction.

A two-dimensional steady-state, two-shock heliospheric interaction with the local ISM: (top plot) the logarithmic temperature distribution of the SW and interstellar plasma, clearly identifying the three distinct regions and the overall topology and boundaries that can exist, and (bottom plot) the density distribution of neutral H. The heliospheric termination shock, heliopause, and bow shock are labeled, and the wall of neutral H is identified. The solid lines of the top plot show the plasma streamlines. Distances are measured in astronomical units. 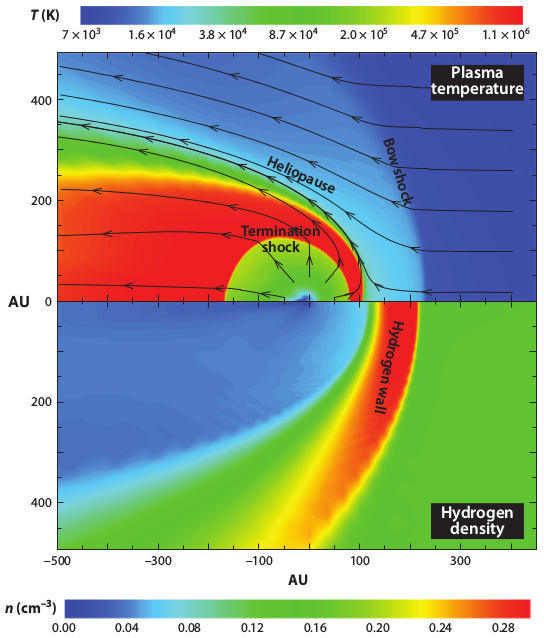 Research from 2017 indicates that the image may not be realistic.

Recent analysis of Voyager, IBEX (Interstellar Boundary Explorer) and, somewhat surprisingly, Cassini data, seems to indicate that the heliosphere is more like a symmetric bubble.

New data from NASA’s Cassini mission, combined with measurements from the two Voyager spacecraft and NASA’s Interstellar Boundary Explorer, or IBEX, suggests that our sun and planets are surrounded by a giant, rounded system of magnetic field from the sun — calling into question the alternate view of the solar magnetic fields trailing behind the sun in the shape of a long comet tail.

The results are presented in an article in Nature Astronomy, which is unfortunately behind a paywall. What I understand from the abstract and the NASA article is that they imaged the heliosphere with one of the instruments on Cassini and showed on basis of Voyager measurements that what Cassini saw is indeed originating from the heliosheath, confirming that Cassini imaged indeed the shape of the heliosphere.

These observations also demonstrate that the heliosphere responds promptly, within ~2–3 years, to outward propagating solar wind changes in both the nose and tail directions. These results, together with the [Voyager 1] measurement of a ~0.5 nT interstellar magnetic field and the enhanced ratio between particle pressure and magnetic pressure in the heliosheath, strongly suggest a diamagnetic bubble-like heliosphere with few substantial tail-like features.

(from: "The bubble-like shape of the heliosphere observed by Voyager and Cassini", Nature Astronomy, 2017)

Since the results cited in Camille Goudeseune's answer is also quite recent (2015), I guess the discussion is still open.

Not the answer you're looking for? Browse other questions tagged the-sun solar-system solar-wind or ask your own question.

11
Is there any wavelength at which the Sun is both transparent to and quiet of electromagnetic radiation?
9
How was this image of the sun taken and what does it show?
28
Is this really an image of the sun, or an "artist's conception"?
6
What is this white dot and strange line in SOHO image?
2
Could, in another star system, gas giants be closer to the star then earth-like planets?
0
Could a spacecraft be propelled by the deflection of a very high number of charged particles?
3
Would the Voyager probes go backwards affected by the strong interstellar wind beyond Heliosphere?
3
How quick was the solar wind particle decrease detected by Voyager 1?