I've been working through a thought experiment with a friend of mine, with some of my previous questions already being (very helpfully) answered on here :)

Here's the current issue I have though - Engines.

So my project is a fairly large 'ship', that doesn't need to get anywhere particularly fast, but can't be too ridiculously slow. As chemical rockets would require huge amounts of fuel, it seemed like the better solution was to go with an Ion drive instead.

Because of the mass of the ship though, this meant stacking up a few VASIMRs. Which, as far as Xenon (or whatever propellant) goes, it's pretty good. Constant (very small) acceleration will gradually pick things up. If you can generate 200MW of power.

And this is where I hit the next wall, and the 'false economy'. In order to generate that kind of power, you would need 150,000m3/h of hydrogen (in a hydrogen generator). I can't find information on the usage of nuclear fuel, but I suspect it's not insubstantial. It's also about 800 acres of solar panels, apparently.

So while the Ion engine is much more fuel efficient as far as propellant goes, it seems to trade that for another type of fuel. Which is fine for small-scale probes which can utilise solar energy, but not for the big boys.

So I have hit a wall, where even for relatively short range (such as mars or the asteroid belt) trips, we don't seem to have the capability to power a ship to our destination.

I've written this to mostly explain my process thus far, and so to ask the question -

What would be the way to power a ship with a mass of many hundreds (perhaps thousands) of tonnes, from LEO to LMO or the asteroid belt? Within the lifetimes of the people on board, preferably haha. Cos I'm stumped.

Are you burning the hydrogen in a fuel cell to get the power for an ion drive? I don't think that's wise. You'd get more delta/v using the hydrogen and oxygen in a conventional rocket.

A nuclear reactor fuel mass I don't think would be prohibitive. According to this site, generating 200 MW for a year would require about 5 tons of fuel. You're bringing much more Xenon along than this for your reaction mass. At large enough scale, nuclear power is something of a no-brainer for an interplanetary ship.

Note: the 5 ton figure is for low-enriched fuel; for space applications, you'd probably want to use higher enrichment, which would lower the required fuel mass.

Yes, ion engines are somewhat of a false economy in the sense that they rely on electrical power on top of their mass and their propellant (e.g. Xenon).
So, compared to a chemical rocket engine where engine mass, thrust, specific impulse, plus propellant (and the mass of the tanks to store it) is about everything you need to plan an hypothetical spaceship, here you do have to add the mass of the thing you will get electric power from.

Some figures for nuclear:

However, remember that nuclear usually produces a lot of heat on top of electric power, so you might need some big radiators. Another figure for KRUSTY in the same link gives 335Kg for 1 kw and 1120 kw for 10kw for the whole package (not just the reactor) including heat rejection components.
This is a lot worse than 191 kw/ton and more like 10kw/ton.
The encouraging part is that the 10kw reactor did not need 10x mass compared to the 1kw one. It may be that @ 200MW a nuclear reactor would have a much better power/weight ratio.
Note that the nuclear fuel mass is only a very small percentage of the weight in the above figures.

Some figures for solar:

The THINS solar array technology referred in the above question might do even better (500 kw/ton) but I did not find the figure about $kw/m^2$, only $kw/m^3$ (which is when panels are stored).

I do not know how much assembling so many of them would be troublesome.
Indeed lifting 1333 tons is troublesome, but you are already assuming a thousands tons spaceship so... Also your figure of 200MW would mean having 1000 VASIMIRs (1 VASIMIR = 200kw)... so I guess they will weight quite a few tons already!

One mission profile thought up for the VASIMR involves initially travelling closer to the sun to take advantage of the stronger solar flux to run the engine at high power, releasing a payload on a long coasting trajectory and slowing the launching vehicle back down to return to Earth. 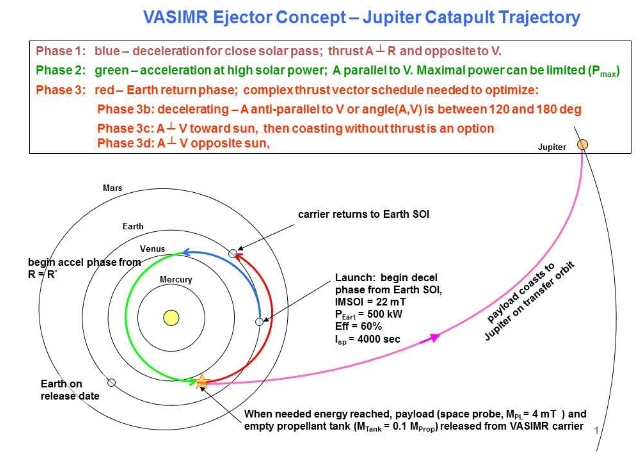 The idea is still a little half-baked at present (the engine performance isn't there yet, the mass ratios are too high, it isn't practical to retrieve the launching vessel, no thought was given to returning from the destination) but it shows that it is possible to use an electrically-driven rocket without the need for nuclear reactors.

In this case, the flight time is 3 years, which should be confortably within the lifetimes of any crew, though those lifetimes may be reduced somewhat by spending 3 years in interplanetary space...

Not the answer you're looking for? Browse other questions tagged crewed-spaceflight fuel engines power or ask your own question.