BepiColombo is a probe that was sent towards Mercury in October 2018. It will flyby Earth in April 2020, but I would like to know where it is in the meantime. Is there a website that shows where in the Solar system BepiColombo currently is?

It has interactive 3D tools, developed by the SGS team, shows the spacecraft attitude and where the European Space Agency's BepiColombo spacecraft is on any given day from launch in October 2018 to just beyond the end of its cruise phase end on November 2025 to reach Mercury planet. You can watch the entire journey play through or get the spacecraft’s current position. The information returned tells you how far Bepi Colombo (red track) is from the Sun, Mercury, Venus and Earth and the accumulated distance on its journey.

Here's how it looks: 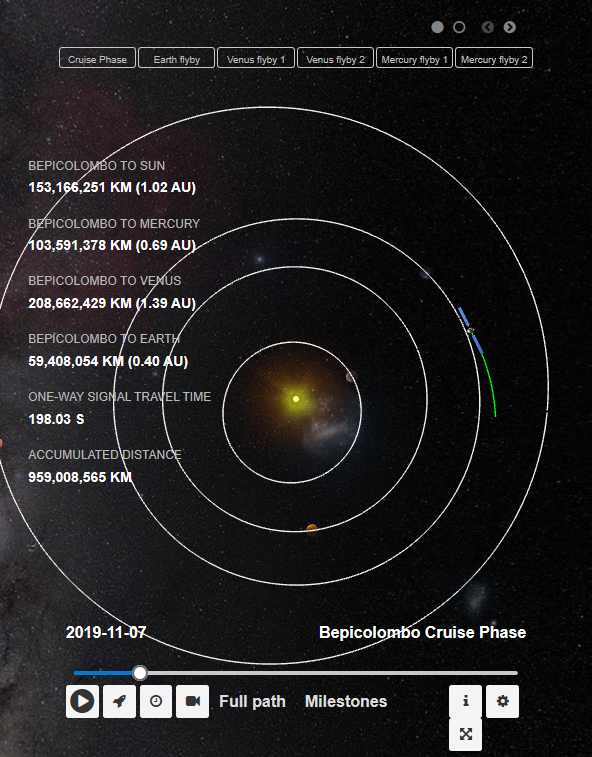 You may select the specific events or slide to any date within the mission period. There are a bunch of information*. 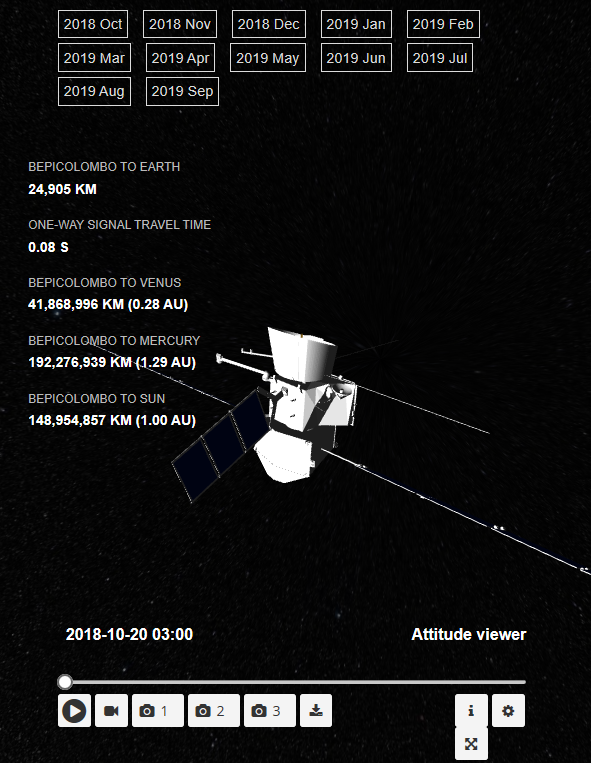 Recommended browsers: Chrome & FireFox. But it works in Microsoft Edge

Bonus: You can know the Mission Status from the toolbar on the top right portion of the same page. There's a countdown for the next event too.

*But note that distances are based on the best values available at the time of preparing this tool and with respect to the center of the planets, but you should be aware that this is not a scientific tool. Note that the proportions and appearances of the planets and BepiColombo are not true representations, and no indication is given about the planet rotations.

Not the answer you're looking for? Browse other questions tagged probe bepicolombo or ask your own question.

34
Where are Pioneer 10, 11 and the Voyagers ultimately headed?
9
Are multiple sub-probes feasible for fast flyby missions to outer Solar System objects?
8
Does solar wind have any influence on probes?
1
Why aren't deep-space probes launched from space?
4
Probes on a Solar System Escape Trajectory
4
Help understanding BepiColombo's weak capture at Mercury's L1 and need for delta-differential one-way range measurements
29
Why are probes that tend to explore outer system always launched to go outwards instead of straight upwards or downwards?
6
Is a graviational slingshot around Mercury a feasible solution for space probes?
4
Why must “Mercury’s core (be) partially molten” to explain its weak magnetism?