The Space Shuttle is a good example of asymmetric launch vehicle. It required heavily-gimballing engines to keep everything balanced.

As a KSP enthusiast, I found that attaching the external tank to the nose of the Orbiter essentially solved that problem. But we know NASA never used such a design.

Why was the ET not aligned with the Orbiter ?

The best place for the tank is below the orbiter just above the engines.

This placement allows short and straight pipes from the tanks to the engines. All parts could be balanced and aligned. No heavy gimbaling necessary. Solid fuel boosters could be aligned parallel to the tank. Separation of the tank from the orbiter is as easy as a conventional stage separation.

The engines are not needed in orbit and for reentry, but they could not be recovered easily.

This placement was used for the never realized spacecraft Hermes.

But the liquid cryogenic engines of the Shuttle should be recovered with the orbiter itself, so the tank could not be placed directly above the engines.

The original design concept was for the Orbiter to ride piggyback on a manned, reusable winged booster.

When budget realities forced elimination of the booster, it was replaced by the tank/solid booster combination, but the piggyback mounting was retained. 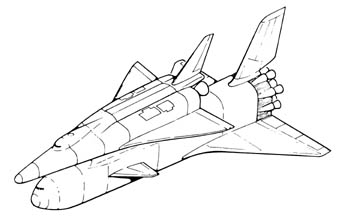 Not the answer you're looking for? Browse other questions tagged space-shuttle engineering or ask your own question.

14
What was the first time a “re-used booster” was used to put a payload into orbit?
6
Was computer aided design used on the Space Shuttle Program?
8
Why aren't there many audio soundscapes recorded within the spacecraft?
6
How big of an external tank to replace the shuttle SRBs with more LH2 and LO2?
7
Could the Space Shuttle orbiter have used the Energia HLLV (used by Buran)?
43
How hard would it be to fly a Space Shuttle again?
1
Why didn’t the space shuttle external tank have pressure-relief vents?
3
How much fuel/oxidizer was held in the piping of the Shuttle orbiter?
6
Was this 1969 space shuttle feasiblity study too optimistic?