Why did the Saturn V stage fairing appear to burn after separation?

This video shows the stage separation of the 1st stage of Apollo 4 (incorrectly identified as Apollo 11) followed by the jettisoning of the ring-shaped fairing between the two stages.

The moment the fairing is jettisoned (at 0:40), it appears to catch fire and burns in a very spectacular-looking way. What exactly caused this effect? 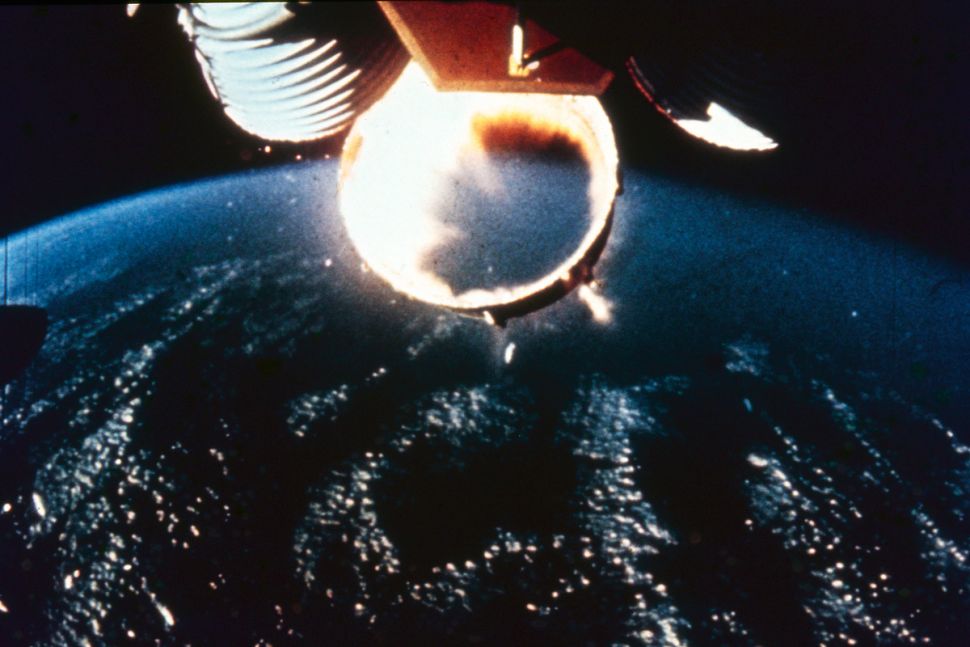 The From the annotated Apollo 8 Flight Journal, in the notes after the 2:36 mark, we see that the interstage separation happens well after the J-2 engines on the second stage are running:

If, at staging, the interstage were to stay with the S-IC, there is a danger that any slight rotation of the massive first stage would cause contact between it and the engine bells on the S-II. Therefore a cut is made directly above the S-IC using a shaped explosive charge. This leaves the interstage attached to the S-II. However, the ring imposes a significant mass penalty on the second stage. So much so that it is a mandatory abort if the interstage doesn't separate. It too is dropped 30 seconds after the first separation. This gives time for the second stage engines to establish smooth acceleration with minimal rotation. [The J-2 engines start less than a second after separation of the first stage.]

So at the time the interstage falls away, the J-2 engines are going full-thrust. Hydrogen-oxygen exhaust in vacuum is essentially clear -- it's mostly water vapor, so it's not obvious that they're running, but they are.

As the [interstage] ring enters the superhot exhaust gases, it glows furiously, presumably as its paint coating is vapourised.

Hydrogen rocket engines run fuel-rich, so there wouldn't be much free oxygen in the exhaust stream to burn things with. However, any paint, cabling, or other material on the inside of the interstage would heat up and outgas quickly, and presumably that gas mixture burns with a yellow flame.

The burning seems to be after the 5 J-2 engines on the second stage fire. Each J-2 has about 230KLbs of thrust for well over a million lbs of thrust aggregate.

ANYTHING exposed to 1 million lbs of LOX/LH thrust is very likely to burn. No doubt they ran some oxygen and hydrogen through the engines to pre-cool them before igniting, (like the SSME does, like most engines do) so there was likely a local non-vacuum environment for a short period of time.

Sort of like how a Delta-4 Heavy's hydrogen venting for engine preconditioning hangs around enough to light the outside on fire. Just with less oxygen in the Saturn V case.

Additionally, I think you are seeing little ullage style engines firing to force a tumble onto the interstage for a more destructive reentry. Wikipedia says they were solid rockets:

Eight small solid fuel separation motors backed the S-IC from the interstage at an altitude of about 67 kilometers (42 mi).

My guess would be it's predominantly due to cryo-pumping, cryogenic propellants in the interstage liquefying and solidifying atmospheric gases, among which oxygen, because of liquid hydrogen propellant temperatures being low enough to liquefy atmospheric air on contact when Saturn V was still on the launchpad (but fuelled), so the whole interstage ring held onto it and provided oxidizer for the excess hydrogen (low oxidizer to fuel mixture) in the exhaust of the upper stage. Notice chunks of ice falling off the interstage (and the upper stage) on separation. 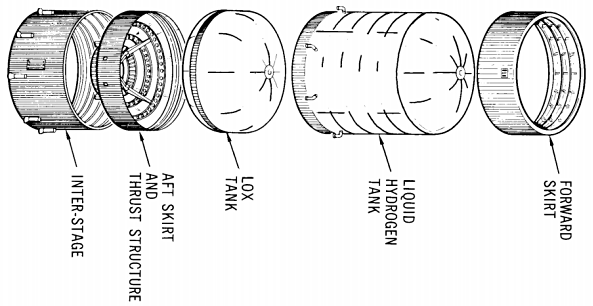 The interstage, fabricated at NAA's Tulsa plant, is a semimonocoque structure. Semimonocoque means that the skin has a minimum of internal framework. The interstage is slightly over 18 feet in height and 33 feet in diameter. The structure has internal circumferential supporting frames and external hat sections positioned vertically to provide structural rigidity.

After first stage burnout and initial separation, eight rocket motors attached equidistantly around the interstage are fired for approximately 4 seconds. These motors, called ullage motors (an old brewer's term referring to the gaseous zone in a tank above the liquid), provide positive acceleration and therefore pressure to force the stage's propellants into the feed lines to the J-2 engines. This is called the ullage maneuver. The interstage is separated from the second stage approximately 30 seconds after it separates from the first stage. The two-step separation of the interstage is called dual-plane separation.

In a nutshell, the interstage brought along with it ice chunks of Earth's atmosphere that facilitated the burn with its oxygen where you wouldn't really expect it, once they started to outgas due to sublimation in hard vacuum and heat from the upper stage exhaust. Part of the required oxygen might also have been provided by the titanium dioxide white paint on the interstage itself, with oxygen releasing from them at the temperatures of the upper stage exhaust, or heat insulation materials used in the inner side and soaked in cryogenic propellants (cryo-ingestion of leaked propellants mixed with nitrogen used for purging them from the interstage) catching fire.

I discuss cryo-pumping and cryo-ingestion in more detail in my answer to Why was the Shuttle's LOX tank on top of the LH2 tank, since that makes it more top-heavy?

Not the answer you're looking for? Browse other questions tagged launch stages upper-stage saturn-v or ask your own question.

27
Would Earth fireworks work on the Moon or on Mars?
12
Why was the Shuttle's LOX tank on top of the LH2 tank, since that makes it more top-heavy?
1
How do second stage rockets ignite their engines?
6
Did the Saturn V interstage ring burn up in the atmosphere?
2
What did the Saturn V interstage camera capsules look like?
0
Is spacecraft propulsion observable in space?

94
What happens to the Falcon 9 second stage after payload separation?
3
Why is the Falcon 9 upper stage tumbling so much after separation? (SES-10)
6
Did the Saturn V interstage ring burn up in the atmosphere?
5
1/st Stage slow down after MECO and separation for F9's
7
What may be the condition of the first stages of Saturn V splashed into ocean after separation?
23
Why does the Saturn V have standalone inter-stage rings?
2
Why is Ariane-5's upper stage appear to vent exhaust post engine cut off?