Am I correct in assuming that security during a launch rehearsal test is very high? That all the people working in the service structure have been well vetted and it is highly improbable that someone could simply walk up to the location and find a way to the white room area.

At least in the shuttle days:

To access a NASA site you must either have a NASA badge (the issuance of which required you to pass a Homeland Security Presidental Directive - 12 or equivalent background check) or be escorted by a properly badged individual. In addition to general site access, you must also be badged for the specific work areas.

To access the launch tower you must have a badge specifically granting you the privilege of entering that area. KSC was divided into a number of Controlled Access Areas (CAAs) and the areas you were allowed to enter were listed on your badge which also had your picture on it. Humorless, armed individuals prevented you from entering CAAs you were not badged for.

Here's a (slightly modified) example of a KSC badge showing access allowed to Launch Complex 39, Cape Canaveral Air Force Station, and the KSC Industrial Area. There was also a second, "portrait" oriented badge with the numerical CAA areas listed on it. This was the temporary badging issued to JSC people going to KSC for work, permanent KSC people may have had a different one. This was in addition to your regular NASA badge. 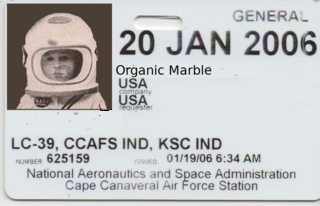 Not the answer you're looking for? Browse other questions tagged nasa launchpad security or ask your own question.

14
How were vibrations supposed to be handled in an Ares I?
64
Is there no physical security in space, other than being in space?
7
Disposal pool during RS-25 engine test?
18
Did NASA's Borg Collective-designed antennas work? Have similar designs ever been used in spacecraft beyond testing?
1
What's the geometry of Ignition Overpressure Protection system protecting rocket launches?
1
How will the Gateway-before-boots sequence benefit US business, economic and technological development?
1
How did the Rotating Service Structure achieve environment control?
4
What prompted NASA to establish a KSC SWAT Team?