How do orbital elements change when force is applied orthogonal to the velocity vector?

Let's say you are standing on the Moon, with the Earth directly above your head (the moon being tidally locked with the earth. At this point you and the Moon are sharing an orbit, both experiencing the same orbital elements.

You climb into a cannon that has just enough force for you to reach escape velocity (or, maybe more appropriately, leave the Moon's sphere of influence). Pull the trigger, and force is applied orthogonal to your velocity vector.

How does your new orbit differ from the Moon's? What orbital elements changed in this process? Would your orbital period relative to the moon decrease?

These answers are all really great, but I made things too complicated by involving the moon. Instead, more simply, how do orbital elements change when force is applied orthogonal to the velocity vector of an orbiting mass? Think about a satellite in GSO.

Would your orbital period relative to the moon decrease?

Somewhat surprisingly, yes. You will end up in a slightly smaller orbit about the Earth with a slightly smaller period. That's assuming that (1) a patched conic is a valid approach (it probably isn't in this case), and (2) I've done my math right.

I'll assume the Moon is in a circular orbit at 384500 km, moving at 1.022 km/s relative to the Earth. I'll assume you fire the canon at the sub-Earth point at a velocity of 2.375 km/s, aiming straight towards the Earth.

Using a patched conic approximation, you are on a radial parabolic trajectory. It will take 1.315 days or 0.04814 sidereal months to reach a distance of 66000 km from the center of the Moon (that's the radius of Moon's sphere of influence; c.f. the 60000 km radius of the Moon's Hill sphere), at which point that initial 2.375 km/s velocity will have dropped to 0.3854 km/s.

Converting to geocentric coordinates, you will be 322100 km from the center of the Earth and moving at a speed of 1.195 km/s relative to the Earth.

Using the vis-viva equation, this means you will be in an elliptical orbit about the Earth with a semi-major axis of 380700 km. That orbit has a period of 27.056 days.

You won't stay in that orbit for long. The Moon is going to perturb that orbit, big time.

"Your new orbit" isn't simply a two-body orbit about the Earth that you might be thinking of, since the Moon is still there after you (barely) escape. In the long term it will be a complicated trajectory that will eventually result in you impacting the Moon, escaping the Earth-Moon system, or possibly even impacting the Earth. So the concept of orbital elements is not terribly useful.

Here are some examples of your trajectory where you are launched at or a little above the lunar escape velocity. (The gray circle is the Moon's orbit. The blue disk in the middle is the Earth to-scale.)

Shown under each trajectory is your specific energy in the Earth-Moon system. You can see that initially it is always less than the Moon's (the gray line), and so your "orbital period" is shorter than the Moon's. But it can go above the Moon's after a few lunar flybys, and usually does. Where the plot doesn't go all the way across, it impacted the Moon where it ended. In one case, you can see that you escape the Earth-Moon system completely.

Here are some interesting borderline cases. Below 0.978 they all do the same thing -- immediately reimpact. 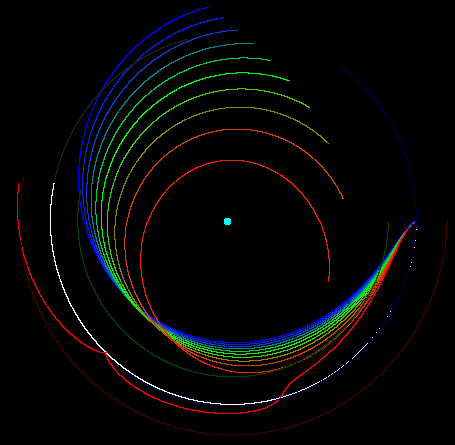 Here's a screen capture from an orbital sim for a variety of pellets launched straight up from the moon's near point. The red #1 pellet is just under escape velocity. The blue #11 is a hair over. Tidalwave, The blue dot is the earth. The white orbit is the moon. I placed darker colored pellets at EML1, EML2 as well as EML4 and EML5.

The rainbow pellets are from what I call orbital shotgun. The pellets velocity and direction vary from one extreme (pellet one) to another (Pellet 11). Here is the page I used to do this sim: Orbital Shotgun Making smaller time increments makes the model more accurate but slower. I had to make time increments pretty small for this sim. It can be seen that pellet 1 doesn't quite make it past EML1 and falls back to the moon. The rest of the pellets escape the moon's sphere of influence and fall into earth centric orbits

In general pellets the pellets will hit the earth, moon, or be completely ejected. Just a tiny variation in velocity can make a huge difference in outcome. In this diagram the fastest pellet varies from the slowest by .6 meters/second: 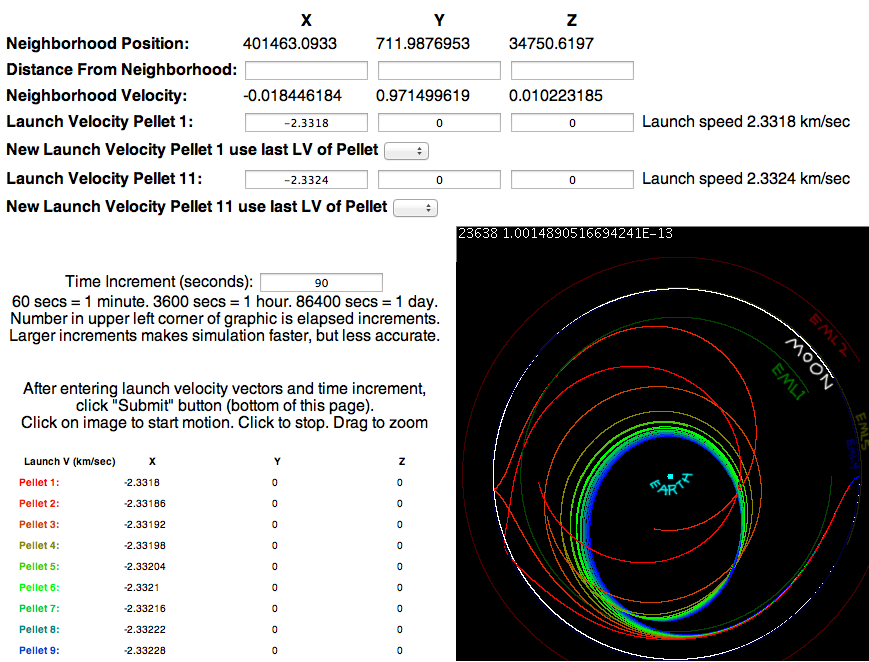 Not the answer you're looking for? Browse other questions tagged orbital-mechanics the-moon soi or ask your own question.

5
What would your altitude be after you had achieved escape velocity from the moon?

34
How to programmatically calculate orbital elements using position/velocity vectors?
10
Clohessy-Wiltshire/Hill's Equations - F=ma?
4
Could "Asteroid Redirect" make the moon more dangerous for astronauts for a long time?
3
Secular variation of orbital elements and influence of force components
2
How to rotate orbital ellipse when radial velocity is added to the orbital velocity
5
Calculating velocity state vector with orbital elements in 2D
5
How much G force is applied when correcting an orbit around Earth?
1
Confusion with direction (vector) of minimum velocity required to reach an orbit and escape velocity
3
How to calculate position and velocity from given orbital elements?