I've seen numbers such as 274 m/s2, but that doesn't make sense to me seeing that relatively weak sources of spacecraft thrust such as Electric Propulsion can overcome the Sun's gravity and raise heliocentric orbits as well as orbits around the Earth which has a gravitational constant of only 9.81 m/s2.

Raising an orbit with a weak form of propulsion

Yes the Sun's gravity is stronger than the Earth's on each body's surface, but it drops like $1/r^2$. See the math below.

A spacecraft in a heliocentric orbit around the Sun will just continue to orbit the Sun without any propulsion for millions or possibly billions of years because the spacecraft is launched from Earth and will have the Earth's roughly 30 km/s velocity.

If you have a weak form of propulsion, it doesn't need to fight the Sun's gravity. Instead, the spacecraft points the engine behind itself and pushes itself forward. This causes the spacecraft to slowly spiral outwards over time.

At first that might seem huge, but the problem is that gravity is a pretty small force. For objects on Earth that we can measure the mass accurately, the gravitational force is so small that we can't measure it well. But for large objects in space (Earth, Moon, planets) where we can measure the gravitational force accurately by carefully measuring the motion of satellites, we have no way to independently determine the mass accurately.

So for accurate calculations in space we use the product $G$ times $M$ which is written $GM$ and called the standard gravitational parameter of an object. See for example Where to find the best values for standard gravitational parameters of solar system bodies? where the value for the Earth has 12 significant digits and the Sun's has 15! Compare that to only five significant digits for $G$ alone.

The acceleration you experience now is just written as $g$ with out the subscript.

Written in vector form it's

$r$ is the position vector from the center of the body, so the minus sign tells you that the acceleration is downward.

The total acceleration you would experience on the Sun's or Earth's surface is complicated by the fact that no realistic body has a perfectly spherical mass distribution and most bodies are also rotating and other nearby bodies also pull on you. See for example @DavidHammen's interesting table of those for someone on Earth and this answer for an equation for the main term of acceleration due to Earth's oblateness.

The standard gravitational parameters and radii for the Earth and Sun are shown below, along with the approximate acceleration due to gravity on their surfaces using the equation above

These values for $g$ at the surfaces are the same as the ones in your question.

They are equal to $G$ times $M$ divided by $r^2$ and are approximately the gravitational acceleration you would feel on each body's surface. They are not exact because the bodies are not spherically symmetric, and you would "feel" other accelerations both real (due to gravitational attraction mostly from the Moon on Earth and mostly from Jupiter on the Sun) and fictitious (centrifugal force due to the body's rotation).

Gravitational acceleration is not just one number for a given body

Gravitational acceleration for any body is a function of the body's mass and the distance from the body's center of mass at which you are measuring it. It is proportional to mass and inversely proportional to the square of the distance; double the distance and acceleration divides by 4. The 274 m/s2 value occurs at the Sun's surface (a somewhat ambiguous point, as I commented). The Earth's orbit has a radius roughly 200 times that of the Sun's surface, so the Sun's gravitational acceleration is some 200 x 200 times weaker out here than at its surface; on the order of a few cm/s2.

When you are already in orbit, you do not have to overcome gravity

All objects in orbit around the Earth are already also in orbit around the Sun, because the Earth is in orbit around the Sun. A spacecraft which acquires enough velocity to escape Earth won't necessarily escape the Sun, but won't fall into it either. Once you are in orbit, changing velocity will affect the trajectory of your orbit; any change in velocity, no matter how small, will have some effect, no matter how small, on your orbital trajectory. So you can apply even the tiniest force, but if you keep doing it long enough, the effect will accumulate. So, even a tiny thruster, if it keeps working for long enough, can take a spacecraft out of Earth's orbit, out of the Sun's orbit, and if it could continue to work long enough, out of the orbit we are in around the galactic center.

Once you're already in orbit you can increase your velocity and semi major axis even if your acceleration is a small fraction of the local gravity field. But long, gradual burns give you a spiral trajectory rather than elliptical transfer orbits. See Adler's answer to my question General guidelines for modeling a low thrust ion spiral? 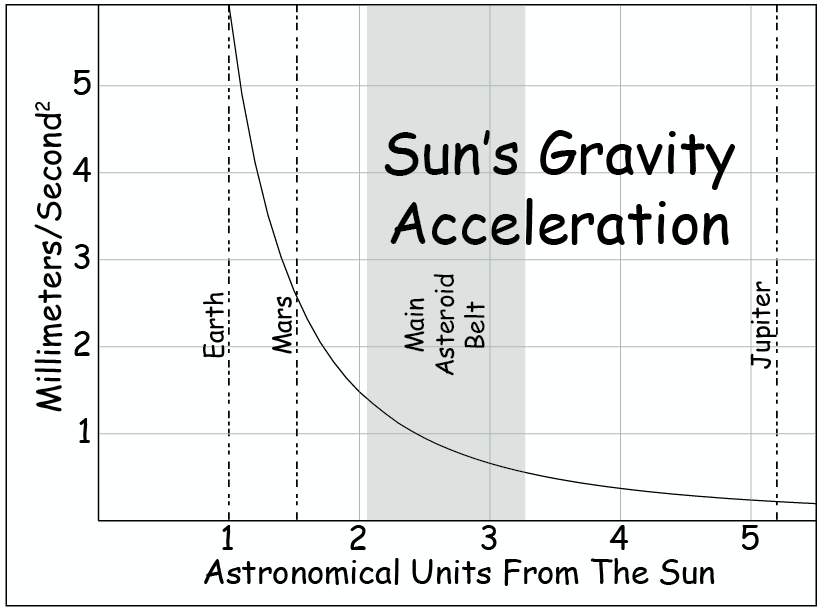 Sun's gravity in the neighborhood of earth is 6 millimeters/sec^2. Out in the Main Asteroid Belt it is less than 1 millimeter/sec^2. So for heliocentric orbits a little further out, ion might be adequate for an impulsive burn injection into an elliptical transfer orbit.

Not the answer you're looking for? Browse other questions tagged orbit gravity the-sun or ask your own question.

10
General guidelines for modeling a low thrust ion spiral?
13
Where to find the best values for standard gravitational parameters of solar system bodies?
6
Physical meaning of perigee advance
3
Why does this formula for the required delta v of a semi major axis alteration not work or am I I misinterpreting it?

19
How deep is the force well of L4 and L5 Lagrangian Points of Earth-Sun set?
3
Using a probe to take gravitational measurements of the interior of the sun
0
Could a spacecraft be propelled by the deflection of a very high number of charged particles?
5
Two 1000 kg gold spheres orbit their CM in near-contact, great way to measure G or limited by spaceflight issues?
0
What Gravity does the Sun affect items with at the distance of 1 AU?
0
How to deteremine the angle between Sun and 2 probes?
12
Did any spacecraft ever use the Sun's gravity for acceleration?