There was some thread here on Space Stack-Exchange about RS-25 refurbishment, but I am interested now, how this refurbishment look from the point of material damage of SSME hardware.

In the early years of the shuttle, SSME needed months of refurbishment and turbopumps must be from safety reasons completely disassembled into small parts. In 30 years of Shuttle program, SSME went through 5 mayor redesign/overhauls but even in 2010 they needed detailed inspections after each flight and some parts refurbishment/replacement. (Quote from Daniel Dumbacher, deputy director of the Exploration Launch Office at NASA's Marshall Space Flight Center, Huntsville, Ala..)

Very broadly information about the Space Shuttle is at: https://gandalf.azureedge.net/shuttle.html (If anybody knows the Docents for Endeavour or Enterprise in NY or LA please give them this link)

Information for the SSME which will answer some of your other questions: https://gandalfddi.z19.web.core.windows.net/Shuttle/SSME_MPS_Info/

So you do ask a big question, the answer is "it depends". I worked on the MPS/SSME system at KSC for many years, no engine processing flow was the same. First off after every launch the SSME's were removed to be taken to the engine shop for many many checks per the OMRSD (Orbiter Maintenance Requirements and Specifications Document). Some of them were "replace 'X' part after 'Y' flights", some were just "inspect ... part" ... But to inspect a specific part you might have to remove a flange, that flange might get scratched during the process which requires more work to fix ... Etc. Anyway, requirements document: https://gandalfddi.z19.web.core.windows.net/Shuttle/SSME_MPS_Info/SSME%20Test%20and%20Checkout%20-%2019980218686.pdf

Pages of checks, starting on page 34: 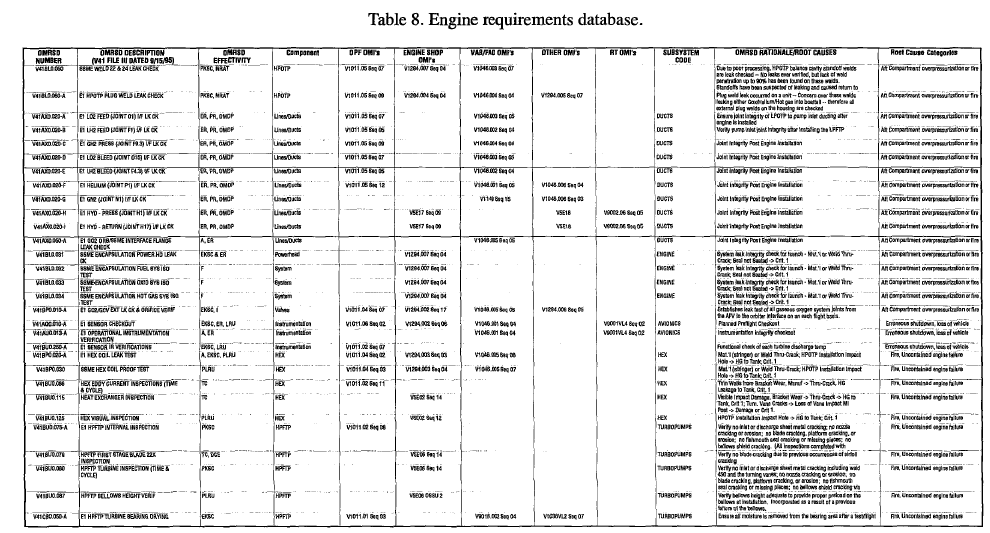 23
What are the small gas jets at the rims of the Space Shuttle Main Engines?
7
Why didn't the space shuttle use non-foam-shedding external tanks?
32
What are the 'lights' inside Shuttle main engines at landing?
8
What is the job of the acoustic cavities inside the main combustion chamber?
14
What (if anything) could have caused all three shuttle main engines to stop at the same time?
6
Shuttle RCC (reinforced carbon-carbon) panels?
2
Shuttle main engines RS-25, material damage on parts that needed replacement/refurbishment
2
Why was the reusability of the SSMEs so poor, and why was this considered acceptable given their purpose to launch a reusable vehicle?
45
Why were the Space Shuttle's main engines placed on the orbiter?
9
Two-Stage Fully-Reusable Shuttle