Do astronauts on the ISS refer to themselves as standing?

When on the CEVIS,(Cycle Ergometer with Vibration Isolation Stabilization) 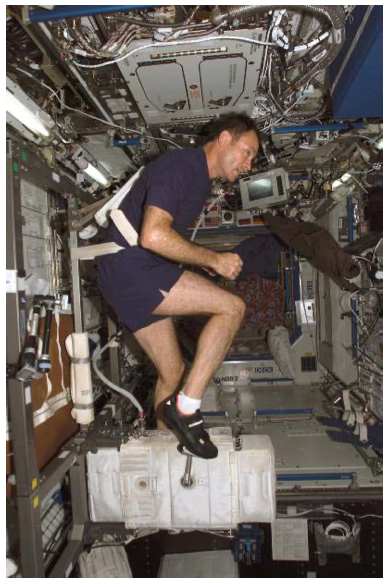 I'm assuming the astronauts would say they are sitting.

When they secure their feet under a blue IVA rail 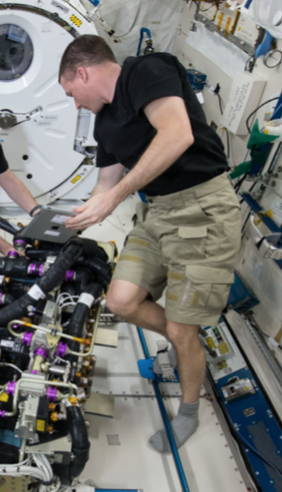 do they say they standing or floating?

I found a single potential example of using "standing" in an astronaut journal entry, anonymized and recorded in NASA/TM-2016-218603, Behavioral Issues Associated With Long Duration Space Expeditions:Review and Analysis of Astronaut JournalsExperiment 01-E104 (Journals) Phase 2 Final Report. This document, and its first phase companion are my go-to sources for astronaut thoughts.

This quote is from page 16 (26 if you count covers etc) of the first link, in the section Adjustment / Low Morale. Emphasis mine.

I actually got completely upset over a 100% trivial thing yesterday. I needed to record an experiment using a [specific] card in a camera. I had a bit of a headache [probably from high CO2 level] and we were really short of those cards. I was pissed because I saw zero reason to record me [doing nothing]. Not even moving, just standing. Plus, there was Ku coverage so the ground could have recorded it. Anyway, I wanted to call down and ask why. Cardinal error for a crew, and luckily both my crew mates jumped on me and talked me out of it. I was mad at them for a bit because they didn’t see my point of view.

I say potential because there's a quote later on where standing is used specifically in respect to the ARED, which is a weight machine, and it makes more sense in that context to talk about being standing or not.

I checked both documents for "float" too, and found that floating (in these journals, at least, over 20-ish examples) refers to movement or being unsecured, both for items and astronauts.

My memory says "hook" is the verb for using feet on rails or loops to hold yourself in place, but I haven't found a source for that yet and that word usage doesn't occur in the sources above. I'll keep checking.

The greatest writeup on using a toilet in space ever penned, Chapter 15 The Void of Space in Clay Anderson's memoir "The Ordinary Spaceman", starts like this:

I was gently floating in the US lab module, my feet firmly anchored in the clever but overdesigned foot restraint device...

Not the answer you're looking for? Browse other questions tagged iss crewed-spaceflight microgravity or ask your own question.

20
Do astronauts aboard the International Space Station (ISS) actually use their legs?
19
How can astronauts float in space without being affected by the gravitational force of nearby objects?
16
What would the procedure be in the event of a collision warning on the ISS
5
Term used to identify the blue bars/rails in the ISS?
1
Can an astronaut stand at attention in the ISS?