Does trajectory of an object orbiting a planet depend on the object's mass? (With hypothetical Apollo example)

For example (hypothetically), if an Apollo crew of one of the lunar missions went on EVA just after Trans Earth Injection burn and carefully released a small bolt, or a plastic package from their food, or the famous feather near the CSM and then hold the spacecraft in the same attitude and didn't perform any course correction maneuvers, would this released object follow exactly same trajectory (as well as velocity and acceleration profile in time) as the heavier spacecraft, i.e. would it stay at same distance relative to CSM up until 0.05g event?

Sorry for asking such a simple question, I'm new to orbital mechanics and just trying to have a feel of its peculiarities on simple examples.

Approximately, yes. The gross gravitational effects on the trajectories of the spacecraft and the other object will be the same.

The force of gravity between two objects is proportional to the product of their masses; by $F = m a$, the acceleration of each object cancels out its own mass ( $a = \frac {F} {m}$ ) and so depends on the mass of the other object.

Since the bolt is in a very slightly different location relative to the earth and moon during the trip, however, the influence of gravity on it will be very slightly different in amount and direction, so it won’t follow an exactly parallel trajectory. It will be extremely close, however, and in practice I believe the difference in gravitational influence will be tiny compared with the difficulty of releasing the object with exactly zero initial velocity relative to the spacecraft. There would also be other confounding factors: solar pressure on the two bodies would push them off course by different amounts, the spacecraft will be venting various things that will push it around, etc.

The acceleration due to gravity will be identical regardless of mass, assuming the mass of your spacecraft is negligible compared to mass of the object you're orbiting. For example the Earths moon is large enough to effect the motion of the earth so it doesn't orbit the centre of the earth, but instead it orbits the shared centre of mass of the Earth and moon (barycenter). Strictly this is true for any orbiting body, but for small objects it is realistic to assume the barycenter is the centre of the earth.

However gravity is not the only force acting on the spacecraft, although it will be strongest up until entry into the earths atmosphere. Drag from the Earths upper atmosphere would probably be noticeable below 2000 km altitude and will accelerate the two objects at different rates causing them to diverge. Also solar radiation pressure will accelerate them at different rates, but this force is so small it would take longer than a single orbit for it to be noticed.

So the two objects would stay at approximately the same distance until the effects of drag in the upper atmosphere start to become measurable.

What the other answers fail to mention is that the mass of your orbiting object actually cancels out. It does not matter. See these two equations:

Where F is force, G is the universal gravitational constant, m is mass, and r is distance between centers of mass of the orbiting and orbited bodies in question. The 1 and 2 represent the object in question, for example $m_1$ is the mass of object 1 and $F_1$ is the force exerted on object 1.

i.e., the mass of the orbiting object does not influence its acceleration in any way.

Does trajectory of an object orbiting a planet depend on the object's mass?

Several of the answers correctly invoke the principle of the universality of free fall, which dictates that the acceleration from the perspective of an inertial frame of reference of an object toward the Earth is independent of the object's mass. What these answers miss is that the universality of free fall also dictates that the Earth must be accelerating toward the orbiting object, and this acceleration is directly proportional to the object's mass.

Does mass of orbiting body affect the orbital speed?

tl;dr: Yes it always does, about half as much. If it's small, like one millionth the mass of the primary, the change in speed is one half of one millionth for example. In the extreme case when the two masses are equal though the trend breaks down and the speed is now 70.7% ($\sqrt{1/2}$ ) rather than half.

Wikipedia's Two body problem and Circular orbit are helpful but I found that the cnx.org page 15. Two body system - circular motion has a particularly straightforward treatment of the circular two body problem.

...then some math and physics happens...

Orbital speed of each body would just be the angular speed $omega$ times each body's radius:

It can be shown that if $m_1$ (i.e. mass of Earth) is constant and the separation between the two $r$ is constant then the change in speed is half as fast as the ratio of masses as long as it's still fairly small.

This "half the difference" trend breaks down when the two masses become closer to equal.

If the second object were the same mass as the Earth, this trend says the speed would be half of the tiny satellite, but it turns out the speed is $\sqrt{1/2}$ or 70.7% rather than 50%. 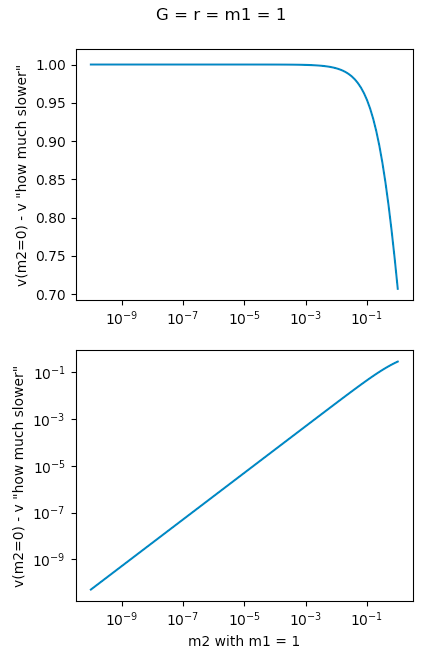 Not the answer you're looking for? Browse other questions tagged orbital-mechanics apollo-program gravity trajectory mass or ask your own question.

4
Does mass of orbiting body affect the orbital speed?
6
Do astronauts develop the ability to regularly place an object at rest inside the ISS after extended periods in microgravity?

9
How much extraneous mass did each of the Apollo missions carry?
1
At what point in the atmosphere does a returning space object adopt the rotational speed of planet earth and how?
3
What would be the longest hypothetical emergency which would confine the Apollo astronauts to their suits?
5
Why does the Apollo reentry trajectory show a few climbs?
4
How to find the optimal launch trajectory for a rocket launched from a planet with an atmosphere?
6
What (the heck) are “space-fixed coordinates” as described in Apollo mission trajectory analyses?
3
Confusion with Apollo CSM attitude maneuvers (roll, pitch and yaw) during coasting to/from the Moon
8
This ISS trash deployment looks more like 2 feet than 2 inches per second, was it too fast or are these articles incorrect?