The liquid oxygen was delivered from a remote location (likely Hawaii). The source doesn't state but it would have to be by ship. 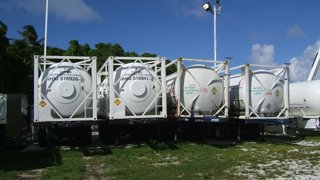 You might recall that the very first Falcon 1 launch attempt was scrubbed because a LOX valve opened in the storage facility and blew off too much LOX.

Based on the ensuing discussion after the abort, the team expects to get new LOX and helium delivered in time to allow for a launch in mid-December.

Statements by Elon Musk in December 2005 allude to a local SpaceX LOX plant which failed prior to the first launch attempt but was later repaired. h/t to Chris Stratton for the correction and providing this reference: https://www.spacex.com/news/2005/12/19/june-2005-december-2005

Pictures and text from this old, apparently abandoned blog.

Not the answer you're looking for? Browse other questions tagged spacex cryogenics lox falcon-1 or ask your own question.

23
How are cryogenic rocket propellants delivered to the launch pad?
6
Supply of liquid oxygen (LOX) maintained on the ISS? Kept cold using "space", or refrigerator?
6
Is this explanation for the SpaceX 1-Sept-2016 anomaly plausible?
0
Is the "cryogenic helium" system in recent discussions actually LHe for cryopumping?
7
Why can’t cryogenic propellants be storable, at least on the ground, via refrigeration?
1
Could in situ (in-rocket) evaporative cooling/refrigeration be used for methane or hydrogen cryogenic propellants?
10
How much liquid oxygen is lost during a Space-X Crew Dragon launch abort?