Are more details about the fatal rocket motor accident at Cape Canaveral in April 1964 available?

The 1966 book The Life and Death of a Satellite by Alfred Bester contains an account of a accidental ignition of a third-stage solid rocket motor in a Delta rocket spin test facility at the Cape which resulted in three fatalities and other serious injuries.

I've been unable to find any other details on this accident. It's briefly mentioned at the Air Force Space and Missile Museum memorial page for those who died at the Cape.

Is there any more information on this accident available?

According to this site, the rocket in question was an Vanguard X-248 rocket motor.

I have then dug up an contemporary news article, published in the Monroe News Star on Tuesday, April 14th, 1964 on the front page: 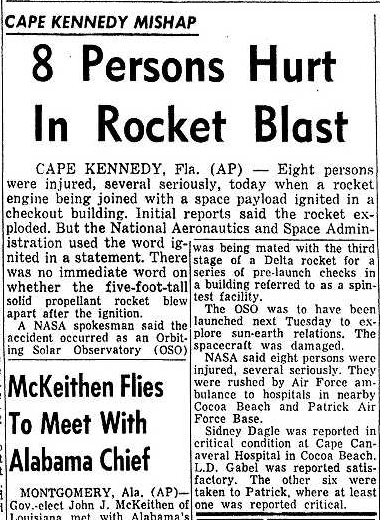 This information (X-248 and that the payload was the OSO spacecraft) led me to the document "HISTORY OF ORBITING SOLAR OBSERVATORY OSO-2", where Section 2 ("The OSO-B Disaster") describes the accident in this way:

Between 0930 and 0939 hours EST on 14 April 1964, the third stage X-248 A-6 solid propellant rocket motor inadvertently ignited and burned in the Spin Test Facility at Cape Kennedy. The rocket motor with the spacecraft attached tore loose from the alignment fixture in which it was mounted and shot to the ceiling of the facility. When it hit the ceiling, the spacecraft was torn loose from the third stage motor and fell to the floor. The rocket motor continued on to the corner of the building and burned until its fuel was expended. Eleven men were burned - three fatally and eight others suffered injuries ranging from critical to minor. The three men who died were not killed immediately but died as a result of their burns within a couple days to a couple weeks after the accident occurred.

Eye witness interviews after the accident indicated that the Douglas personnel had just completed their ordnance checks of the third stage/spacecraft combination. One of the Ball Brothers Research employees stepped over to the spacecraft to adjust the polyethelene shroud which was placed over the spacecraft and third stage as a dust protector and to purge them with nitrogen. As he touched the shroud a crackle was heard and the third stage ignited.

I have worked at the Space Center for 21 years and actually went by this Delta spin test facility today. It is located across the street from the new Eastern Processing facility (EPF) and has been renovated for future use.

The book “Go for Launch” by Joe Powell1 gives some detail of the incident to include photos of the burned out interior of the high bay. This incident occurred during a time when they would spin test the booster with satellite as opposed to just doing a spin test on the satellite alone.

Current satellite safety courses at the Cape stress the importance of grounding and reference this incident as a worst case example. This incident is also referenced in a story titled “a Space Age Ghost Story”2 describing a ghostly “encounter “ a contractor supposedly had at this facility.

Not the answer you're looking for? Browse other questions tagged history failure solid-fuel or ask your own question.