How do Stirling radioisotope generators maintain a temperature differential in a vacuum?

I was reading the wikipedia page on RTGs and happened to stumble upon the section about efficiency. There were three methods that seemed to rely on direct conversion of thermal energy into electrical energy:

Then one which seemed keen on converting it from thermal, to mechanical and then to electrical:

The functioning of this generator can be summarized as found on the page:

Dynamic generators can provide power at more than four times the conversion efficiency of RTGs. NASA and DOE have been developing a next-generation radioisotope-fueled power source called the Stirling Radioisotope Generator (SRG) that uses free-piston Stirling engines coupled to linear alternators to convert heat to electricity. SRG prototypes demonstrated an average efficiency of 23%. Greater efficiency can be achieved by increasing the temperature ratio between the hot and cold ends of the generator. The use of non-contacting moving parts, non-degrading flexural bearings, and a lubrication-free and hermetically sealed environment have, in test units, demonstrated no appreciable degradation over years of operation. Experimental results demonstrate that an SRG could continue running for decades without maintenance. Vibration can be eliminated as a concern by implementation of dynamic balancing or use of dual-opposed piston movement. Potential applications of a Stirling radioisotope power system include exploration and science missions to deep-space, Mars, and the Moon.

A little more research on how Stirling generators function revealed the fact that, to function at all you need to maintain temperatures in two chambers, one hot and one cold. This allows for cyclic compression and the generation of energy through the movement of mechanical parts. To maintain this temperature differential for any prolonged period of time, a regenerator is also needed. The only heat-exchange systems that I have seen and am familiar with are quite macro in size. I'm also thinking that they may not work in a vacuum (I could be wrong here)!

A couple bits of information came from a question asked by uhoh more specifically a source in the answer linked to the question, located here, which states:

They also offer us a diagram as well (among many other cool things): 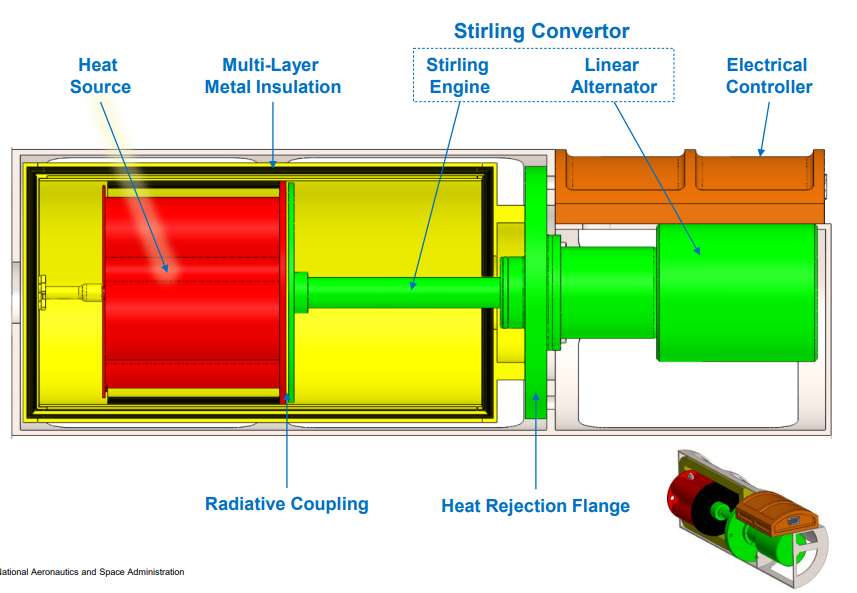 My main question comes in at this point:

As temperature management, dispersal and containment in a vacuum is significantly harder, does this present any problems for the SRG?

The paper mentions a lot about how the heated side will maintain its temperature, but only states:

Which leaves me to wonder:

Another type of regenerator is called a micro scale regenerative heat exchanger. It has a multilayer grating structure in which each layer is offset from the adjacent layer by half a cell which has an opening along both axes perpendicular to the flow axis. Each layer is a composite structure of two sublayers, one of a high thermal conductivity material and another of a low thermal conductivity material. When a hot fluid flows through the cell, heat from the fluid is transferred to the cell wells, and stored there. When the fluid flow reverses direction, heat is transferred from the cell walls back to the fluid.

A micro-scale regenerative heat exchanger has been designed, optimized and fabricated for use in a micro-Stirling device.

Ok, let's try to address one part of your question one at a time.

How will they manage to prevent the build-up of heat on the cool side while functioning in a vacuum?

So this is a great question that gets to the heart of why spacecraft thermal management is a challenge. Being in a vacuum means that there's no atmosphere, which means that you can't reject excess heat via convection to a non-existent atmosphere like we would here on Earth. Ultimately the heat needs to be transported away from where you don't want it and then dumped into space via radiation.

If at all possible, this is done passively via conduction. Sometimes though there are situations (like this one) where you're trying to dissipate so much heat from such a small area (AKA the heat flux) that you just can't do it with conduction. Well what if you could use convection after all? Enter the fluid cooling loop.

Like you said it seems like they plan to use a "Fluid cooling loop to achieve 50 ºC cold end temperature". There are many things that they could be talking about here, each of which come in several different flavors. In general, a working fluid will flow over/through the "heat rejection flange", soak up the heat from the RTG (via convection(), and then transport it to a radiator which will reject the heat into space.

The most common kind of fluid loop is a heat pipe, of which there are many different types (not all of which are technically "loops"). Heat pipes and fluid loops in general are an entire world onto themselves, and would require an entire post to even scratch the surface. But suffice it to say that

Something called a "micro scale regenerative heat exchanger" exists† is that's what is being used?

So it looks like this type of regenerative heat exchanger is designed to be used inside the Stirling engine itself.

The primary function of a regenerator placed between the compression and expansion spaces of the Stirling device is to alternately accept and dissipate thermal energy to a working fluid during oscillatory flow with minimum flow resistance.

From the diagram you posted it looks like they're using a beta type Stirling Engine, which has two pistons on top of eachother in a single cylinder. The regenerator is placed between the hot and cold sections, as shown below. 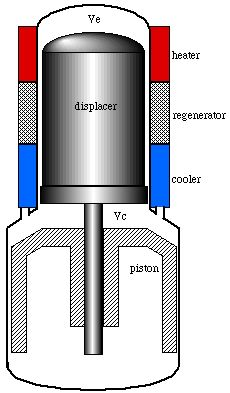 Is this generator not made to function in a vacuum-- but only in a near-vacuum environment? It would still work in a vacuum. The fluid is sealed inside the Stirling Engine, so the presence or lack of an atmosphere wouldn't make a difference. The only affect an atmosphere would have that I can think of would be additional cooling due to convection, which might actually help increase the efficiency depending on the specifics.

Not the answer you're looking for? Browse other questions tagged energy thermal heat rtg or ask your own question.

4
What is the current status of Stirling engine-based radioisotope generator technology?

9
Peltier cell as solar cell in space
5
Could steam be used as a efficient power source for a space craft?
6
Why is Adiabatic wall temperature taken as the driving temperature in rocket engines?
4
What is the current status of Stirling engine-based radioisotope generator technology?
6
Why is the Heat Shield of ESA's Solar Orbiter Black in colour?
9
How do space blankets (thermal blankets) work?
3
Mercury reentry heat shields; material composition, manufacturing process and explanation of all those concentric ridges?