How did the Corona (Key Hole) satellites film canisters deorbit?

The Corona Photographic Surveillance satellites transferred photos back to Earth by releasing a canister with the film, which would deorbit, re-enter, release a parachute and then a plane would intercept it mid-air: 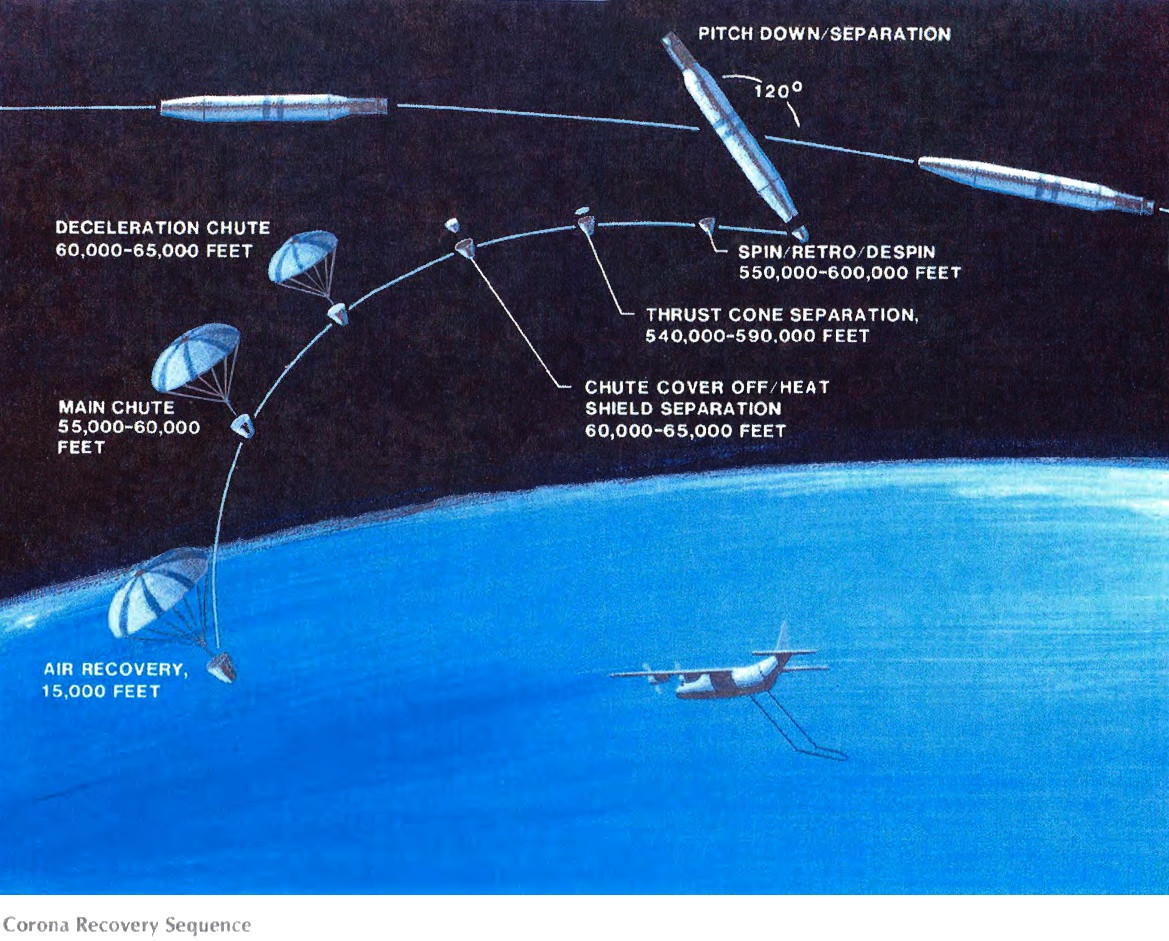 Starting from 1963, the J-mission satellites started to carry two canisters, which made it possible to do a second observation based on the results of the first.

Looking at the schematics, there seems to be a small thruster in each recovery module, but there's only one as far as I can tell. 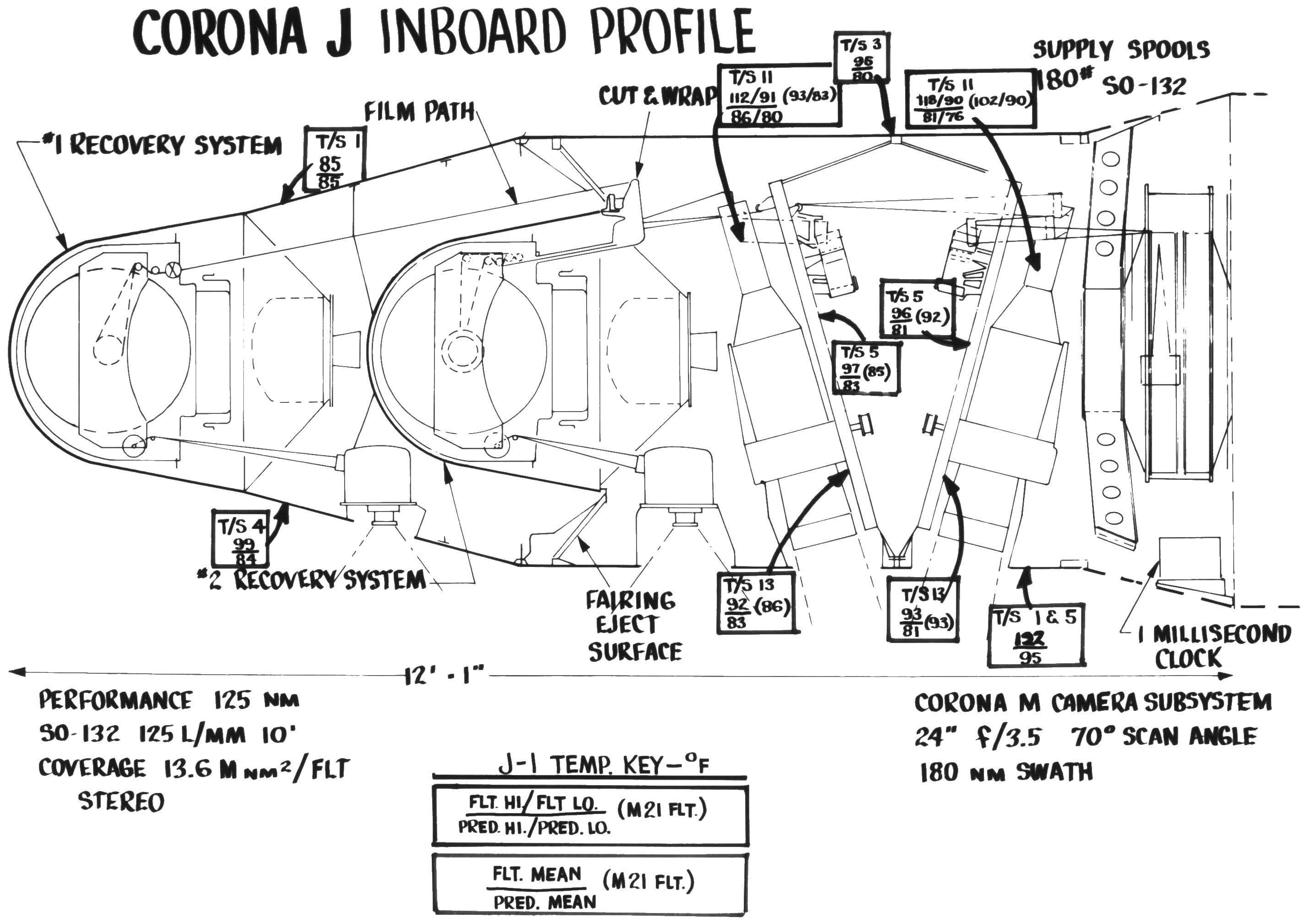 How did the canister deorbit work with only one thruster?

The "Spin/Retro/Despin" label in the diagram implies that there's something more complicated than these two options happening, but I can't figure it out.

The planned recovery sequence involved a series of maneuvers, each of which had to be executed to near-perfection or recovery would fail. Immediately after injection into orbit, the AGENA vehicle was yawed 180 gegrees so that the recovery vehicle faced to the rear. This maneuver minim&d the control gas which would be required for re-entry orientation at the end of the mission, and protected the heat shield from molecular heating, a subject of considerable concern at that time. (Later in the J-3 deign when these concerns had diminished,the vehicle would be flown forward until re-entry.) When re-entry was to take place, the ACENA would then be pitched down through 60 degrees to position the satellite recovery vehicle (SRV) for retro-firing. Then the SRV would be separated from the AGENA and be spin-stabilized by firing the spin rockets to maintain it in the attitude given it by the AGENA. Next the retro-rocket would be fired, slowing down the SRV into a descent trajectory. Then the spin of the SRV would be slowed by firing the de-spin rockets. Next would come the separation of the retro-rocket thrust cone followed by the heat shield and the parachute cover. The drogue (or deceleration) chute would then deploy, and finally the main chute would open to lower the capsule gendy into the recovery area.

Mangled spelling present in original document, thought I may as well preserve it.

Additional stuff can be found here: Intelligence Revolution 1960: Retrieving the CORONA imagery that helped win the Cold War. It has a couple of sections which cover the topic... chapter 5, "Satellite Recovery Vehicle Challenge" and chapter 16, "First man-made object to eject, stablize, and propel itself to de-orbit a payload". From the latter chapter:

Before separation the Agena must tilt down, say 30 degrees from the horizontal, so that when separated, the SRV moves out of the orbital path it was on.

That done, the SRV, now completely on its own, might drift away from this preferred ballistic path if we do not hold it steady to its planned alignment. Thus, weight limited as we are, we must stabilize it like a top. We spin it up with little spin nozzles around the thrust cone.

Finally: the big event. The solid propellant rocket is fired and the SRV slows down enough to get on a ballistic path, which means it will impact the earth somewhere in the 600-mile target area.

Note that at this point the SRV is still spinning, and still pointed at that 30-degree angle, meaning it is coming into the reentry zone with its side presented to the dangers of reentry. The SRV, by virtue of its shape and mass distribution, is aerodynamically stable, so accordingly, we de-spin the assembly allowing the ever-increasing dense atmospheric forces to align the heat shield to point forward into the raging heat of reentry.

Finally, the last task is to get the SRV to jettison its thrust cone, the conical structure that held the spin assembly and the rocket, allowing parachute deployment

Not the answer you're looking for? Browse other questions tagged orbital-mechanics history reentry or ask your own question.

21
How did NASA Conclude that the General Theory of Relativity was not Needed for Earth-Moon Flight Path Computation?
14
Why did early satellites (e.g. China's Fanhui Shi Weixing) re-enter the atmosphere narrow end (nose)-first?
63
How did people know how to build the first space ship?
34
How did the Lunar Module dock with the rest of Apollo 11 and what is the "CSM"?
3
How were polar or retrograde satellites launched in the early 80s?
9
How did the star tracker on the Corona (Key Hole) satellite work?
7
How was motion blur mitigated in the early Earth-observation satellites?
19
When did photographic film stop being used in satellites?
4
Has anyone suggested using an electrically powered sling or centrifuge mass thrower as a form of electrically powered spacecraft propulsion?