How was motion blur mitigated in the early Earth-observation satellites?

The Corona Photographic Surveillance Satellite had one (later two) panning cameras for observations: 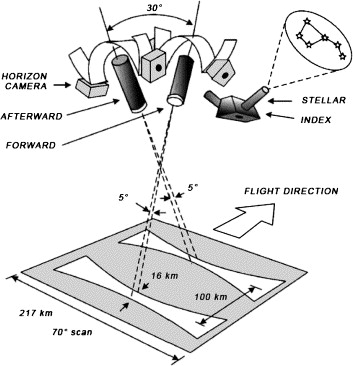 The cameras panned over a 70 degree arc perpendicular to the flight path. From Wikipedia:

he lenses were panoramic, and moved through a 70° arc perpendicular to the direction of the orbit. A panoramic lens was chosen because it could obtain a wider image. Although the best resolution was only obtained in the center of the image, this could be overcome by having the camera sweep automatically ("reciprocate") back and forth across 70° of arc. The lens on the camera was constantly rotating, to counteract the blurring effect of the satellite moving over the planet.

The last sentence puzzles me: how does rotating the camera counteract the motion blur? Is this still an issue with today's technology?

First, the bad news: from Assessment of the CORONA series of satelliteimagery for landscape archaeology: a case study fromthe Orontes valley, Syria

Unfortunately, the mechanics of the IMC were not published in the CORONA documents.

The author does, however, demystify the slightly peculiar wording in the wikipedia page:

The C’’’ camera had the lower section containing the heavy lenses rotate a full 360° while the scan arm at the top oscillated back and forth through a 70° arc. This necessitated aligning and locking in place the scan arm and lens prior to the photograph being taken. This was done using a spring-loaded pin with a V point that engaged a V slot on the rear end of the lens cell. The scan arm itself was driven by a cam that accelerated it up to the lens speed until the V pin engaged the V slot. At the end of the scan, the V pin was retracted, and the cam returned the scan arm to its original position while the lens continued to rotate. These modifications significantly decreased the vibrations because of the back and forth motion of the camera.

So, nothing to do with motion blur, but everything to do with the awkward mechanics of having to stop and start a heavy object rotating every frame. Just let the panoramic lens assembly keep spinning, and take the next shot when it has spun back into place... a neat little solution, given that the satellite was expected to take long strips of continuous observations during its pass.

There's a lot more information about the CORONA project in there too which may interest you, it just doesn't help with this specific question.

(incidentally, I found that the February 1996 issue of Popular Science confused the lens rotation with IMC, and may have been the source of the Wikipedia confusion)

CORONA’s panoramic camera lens assembly swung back and forth and moved linearly for image motion compensation inside the spacecraft.

It has nothing else useful to say about CORONA, but talks about the E-5 camera which was later used in LANYARD satellite flights, and then abandoned in favour of the Mural stereo camera design and its descendants used in KH4 onwards.

Of the E-5 camera, it mentions this:

the camera’s Image Motion Compensation System, which removed the image smear due to the movement of the vehicle over the ground, also moved the entire rotating lens assembly up and down while it rotated.

It does not, of course, say which direction they meant by "up and down", and then goes on to talk about the nightmare of stabilising the satellite against this sort of heavy and intermittant motion.

Another article on the KH8 GAMBIT satellites passingly mentions

it seems reasonable that precise control of the film through the camera was a good way to reduce image smear and increase sharpness and resolution.

again, no detail given.

I'll finish with this note from Introduction to Remote Sensing (google books link, may not work for everyone, page 66):

In the context of analog cameras, image motion compensation is achieved by mechanically moving the film focal plane at a speed that compensates for the apparent motion of the image in the focal plane.

And I suspect that may be as good as you're going to get, here.

Not the answer you're looking for? Browse other questions tagged history earth-observation camera or ask your own question.

12
Which high-resolution Earth-facing satellites transmit data to the public in realtime?
3
How were polar or retrograde satellites launched in the early 80s?
2
Why were the antennas on the spherical surface of some early satellites spiral-shaped?
2
Was the gravity turn used in early spaceflight?
5
Was the nutation problem of the Ulysses spacecraft successfully mitigated? If so, how?
4
What did the Apollo 12 multispectral Four-Camera system look like?
9
How did the star tracker on the Corona (Key Hole) satellite work?
7
Do crew movements or movement of other objects ever affect space or Earth observation experiments staged on the outside of ISS?