Why make X-ray shielding from titanium, when lead is 6 times lighter?

Probes visiting Jupiter and its moons protect their equipment from X-rays with titanium shielding. Juno had 180 kg of the stuff. Europa Clipper is expected to have about that much too.

Terrestrial shielding such as the apron you wear at the dentist uses denser materials such as lead. (Almost anything is denser than titanium!)

This is confirmed by the Health Physics Society:

A titanium [dentist's patient] apron would weigh about 6.6 times a lead apron.

Their calculations use a NIST table of mass attenuation coefficients and mass energy-absorption coefficients as a function of photon energy, 0.001 to 100 MeV. That range covers (I think) most of what Jupiter spews at its moons.

If low mass is so important on a space probe, why is titanium preferred to lead, which would be lighter, cheaper, easier to machine, etc?

A titanium [dentist's patient] apron would weigh about 6.6 times a lead apron.

This is true in their specific example, because the mass attenuation coefficient of lead is about 6.6 times higher than titanium for 60 keV x-rays. Crank the x-ray source up to 10 MeV and lead is more like 1.82x more effective than titanium, and substantially less structurally sound.

As a secondary benefit, materials that are more transparent to low-energy x-rays are more amenable to inspection via x-ray cameras after assembly, which will help with quality control somewhat.

Now onto the meat of the question. Most of the critical points were mentioned in comments above, but I'll aggregate them here:

The most important forms of radiation that spacecraft near Jupiter will be afflicted with are charged particles trapped in Jupiter's prodigious magnetic field... captured electrons and protons and some alpha particles from the solar wind, but also heavier ions produced from other sources like sulphur dioxide escaping Io. There aren't actually any serious x-ray sources out there at all that you'd need to protect a spacecraft from.

It turns out that lead is actually a worse shielding material than titanium is against electrons with a kinetic energy ⪅10MeV, and only slightly better against higher energy electrons. Here's a chart showing the Continuous slowing down approximation range for electrons in lead and titanium, using values taken from the ESTAR database. Higher y-axis values imply more shielding is required. 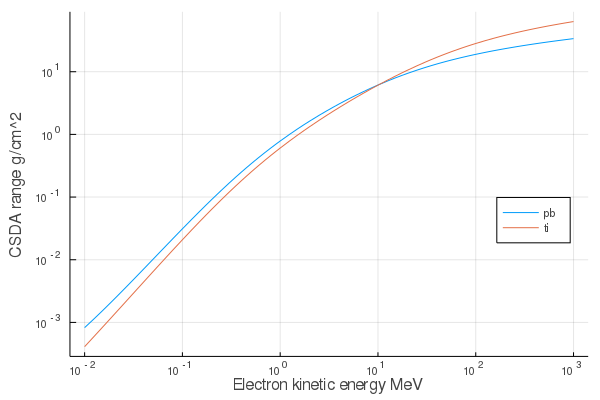 Here's a chart showing CSDA for protons in lead and titanium, with data taken from the PSTAR database. You can see in this one that lead is slightly worse at any energy. 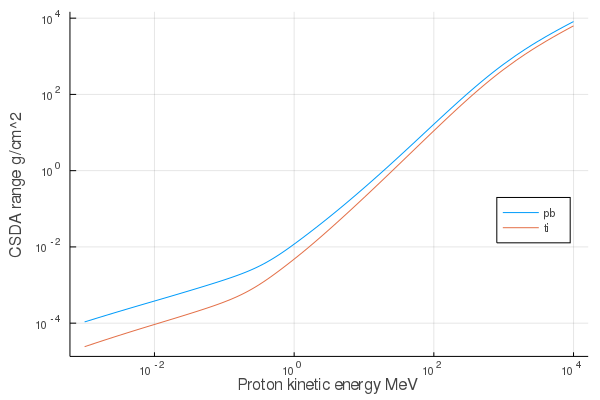 There's also a secondary problem in the form of what happens to the kinetic energy of the charged particle. The faster you slow a particle down, the higher energy the resulting bremmstrahlung x-rays have. The peak energy release will occur at the end of the particle's track through the shielding. This means that dense lead shielding that is just thick enough will produce high-energy x-rays from the inside face of the shielding. Less dense shielding (like titanium) will produce much lower energy x-rays which are more easily absorbed by the remainder of the shield and less destructive to the shielded objects.

Finally, you're left with then are a bunch of structural compromises, like how strong your shielding needs to be, and how thick it needs to be (lightweight composite shielding is great, but quite bulky, for example) and financial compromises, like the cost of obtaining and machining huge chunks of titanium, or the additional time and money required to fabricate multi-layer shielding.

The Europa Clipper project has (I believe) a radiation vault made of aluminium as well as titanium in order to keep cost and weight down (they had to knock a couple of billion dollars off the ticket price of the Jupiter Europa Explorer somehow), and I've found a paper on its shielding (paywalled, and I'm not coughing up 30 bucks to read it) which also suggests the use of tantalum sheets as secondary shielding to be used on sensitive components inside the vault to make up for the less effective vault.

In any case, no-one seems to want to use lead for any kind of shielding. Great for x-ray aprons, a bit rubbish for spacecraft.

From the NASA web site for Juno:

While other materials exist that make good radiation blockers, engineers chose titanium because lead is too soft to withstand the vibrations of launch, and some other materials were too difficult to work with.

There are harder and softer lead alloys, but nothing begins to approach titanium.

Later on the same page:

Each titanium wall measures nearly a square meter (nearly 9 square feet) in area, about 1 centimeter (a third of an inch) in thickness, and 18 kilograms (40 pounds) in mass. This titanium box -- about the size of an SUV's trunk – encloses Juno's command and data handling box (the spacecraft's brain), power and data distribution unit (its heart) and about 20 other electronic assemblies. The whole vault weighs about 200 kilograms (500 pounds).

Panels that large and thin are probably much easier to build with a higher-strength material.

8
How is Parker Solar Probe so robust against coronal mass ejections?
4
What are the cutting edge materials & strategies which could be used for radiation shielding on long-duration missions?

37
Why can't we use the same radiation shielding in Mars that we used when going to the moon?