What are the consequences if an astronaut's helmet gets damaged during a spacewalk?

Note: This has become a frequently asked question. Some related situations which have been regarded as duplicates of this question include these:

See also "Puncturing space suit during EVA. What would happen?" for smaller tears or punctures, and "How would an astronaut's hand react to a hard vacuum?" for effects specific to the hands.

I really want to know the consequences of helmet damage during EVA. Recently I watched a movie called "Mission to Mars" in which one of the astronauts sacrifices his life by taking his mask off. His face was badly affected.

Here is the image for reference. 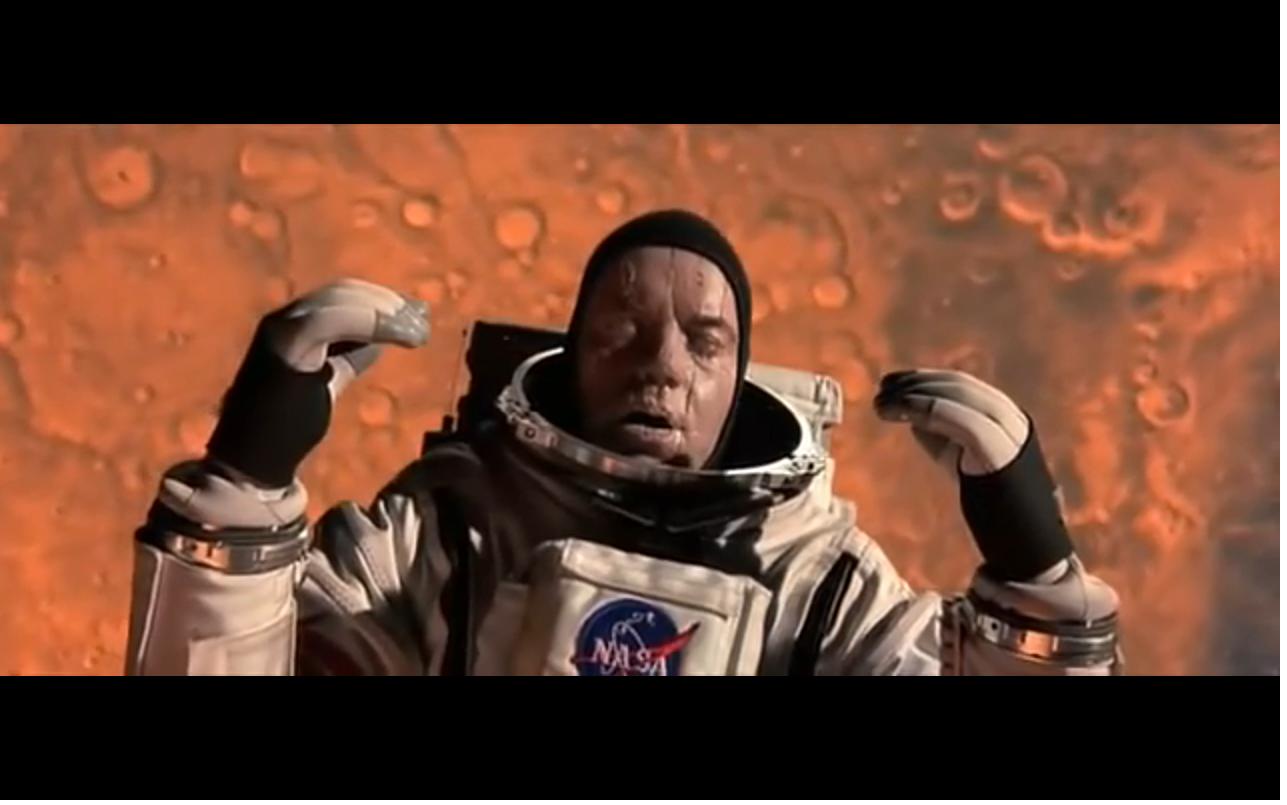 Don't ever take what's portrayed in a scifi movie as fact. You can use the fingers on one hand to count the number of scifi movies that go out of their way to be faithful to science. "Mission to Mars was not one of them. (Nor was Total Recall.)

Will you die if you take your helmet off in space? Of course. Your brain needs oxygen, as does the rest of your body. Without oxygen, you will go unconscious rather quickly. Then you'll die shortly later. You won't blow up. You won't instantly freeze. You might however get an ugly postmortem sunburn.

From this "Ask an Astrophysicist" page at NASA, Human Body in a Vacuum

You do not explode and your blood does not boil because of the containing effect of your skin and circulatory system. You do not instantly freeze because, although the space environment is typically very cold, heat does not transfer away from a body quickly. Loss of consciousness occurs only after the body has depleted the supply of oxygen in the blood. If your skin is exposed to direct sunlight without any protection from its intense ultraviolet radiation, you can get a very bad sunburn.

Short story: your body will swell if not restricted by a suit, so the image does not look unlikely to me (Disclaimer: I'm basing this simply on what I've read about this topic so far, I don't know much about medicine.)

There was one fatal accident in space, Soyuz 11, which gives us an indication what happens. The three cosmonauts died when explosive bolts fired simultaneous instead of sequential while separating the orbital module and descent module, causing a pressure valve to open while they were still in space.

Relevant parts of the Wikipedia article:

On opening the hatch, they found all three men in their couches, motionless, with dark-blue patches on their faces and trails of blood from their noses and ears.

An extensive investigation was conducted to study all components and systems of Soyuz 11 that could have caused the accident, although doctors quickly concluded that the cosmonauts had died of asphyxiation.

The autopsies took place at Burdenko Military Hospital and found that the cause of death proper for the cosmonauts was hemorrhaging of the blood vessels in the brain, with lesser amounts of bleeding under their skin, in the inner ear, and in the nasal cavity, all of which occurred as exposure to a vacuum environment caused the oxygen and nitrogen in their bloodstreams to bubble and rupture vessels. Their blood was also found to contain heavy concentrations of lactic acid, a sign of extreme physiologic stress. Although they could have remained conscious for almost a minute after decompression began, less than 20 seconds would have passed before the effects of oxygen starvation made it impossible for them to function.

According to the article "You Can Survive Being Exposed To The Near Vacuum Of Space For About 90 Seconds With No Longterm Damage" your body will swell if the swelling isn't restricted by a suit. There were lots of tests done with animals (dogs) to study the effects of vaccum. From the article:

Finally, the dogs’ bodies themselves swelled to nearly twice their normal size, so that they looked like “an inflated goatskin bag”.

The NASA study about these dogs mention water vapor effects and gas expansion as the causes for the swelling.

Joseph Kittinger made a high altitude jump at about 31km:

The pressurization for his right glove malfunctioned during the ascent and his right hand swelled to twice its normal size.

This incident is also mentioned in the "You Can Survive …" article:

From my previous experiences, I know that the hand will swell, lose most of its circulation, and cause extreme pain…. I decide to continue the ascent, without notifying ground control of my difficulty… Circulation has almost stopped in my unpressurized right hand, which feels stiff and painful… [Upon landing] Dick looks at the swollen hand with concern. Three hours later the swelling disappeared with no ill effect.

If someone were teleported to mars without her spacesuit, she would first notice her tears, sweat, and mucous membranes boiling in the low pressure. Next, she would open her mouth to breathe, and her saliva would boil. In addition, with no oxygen in the Martian air, she would pass out from suffocation in 15 seconds. Bubbles of nitrogen would then form in her blood, causing her heart to stop and her to die.

There was the Russian astronaut who had to empty his space suit to re-enter his ship on the very first space walk:

As they had with the first satellite and first man in space, the Soviets again stunned the world on March 18, 1965 with the first spacewalk (and the first EVA) performed by Alexey Leonov from the Voskhod 2 spacecraft, for 12 minutes outside the spacecraft. Leonov had no means to control his motion other than pulling on his 50.7-foot (15.5 m) tether. After the flight, he claimed this was easy, but his space suit ballooned from its internal pressure against the vacuum of space, stiffening so much that he could not activate the shutter on his chest-mounted camera

28
What are the "unpleasant effects" of having a cold in microgravity?
39
What are the most serious injuries that astronauts have suffered while in orbit?
0
What is the purpose of this cable connecting Astronaut's boot restraint to a robotic arm?
6
Does sunlight warm an astronaut's face during a spacewalk?
29
What are the Advantages of having a Double-pane Space Helmet?
18
What typically gets sent to the ISS?
20
What are the "Big 13" critical contingency spacewalks on the ISS? Have any actually been performed?
0
What are the main impacts on the body of an astronaut exposed to long term zero gravity?