I've heard that because Earth's atmosphere is so thick that some spacecraft can 'bounce' off the atmosphere if they don't enter at the correct angle. This leads me to believe that shallower angles have more air resistance than steep angles.

If an object comes into an atmosphere directly perpendicular, is there more or less resistance, and why?

“Bouncing off the atmosphere” is a misleading turn of phrase.

When returning to the Earth from the Moon, a spacecraft is on an elliptical orbit with the high end somewhere around the moon’s altitude and the low end just grazing the top of Earth’s atmosphere. The concern around a too-shallow reentry angle is that it won’t slow the spacecraft enough for a prompt reentry. In such cases it wouldn’t “bounce off into space and be lost forever” as is so often suggested or inferred; it would continue on an elliptical orbit -- depending on how much it slowed down in the initial pass, it could return again to Earth days or even weeks later. This would be disastrous for an Apollo-type mission because the command module only has power for a few hours of independent operation.

Atmospheric lift and atmospheric drag are closely related; without thrust, a vehicle that's experiencing lift is being slowed down at the same time. As a spacecraft orbit is slowed by drag, it bends downward, bringing it into denser air, which slows it further in a rapid feedback loop. What lift the spacecraft achieves makes the difference between a short, high-g reentry (like the early, zero-lift Mercury capsules) and a longer reentry with gentler g-forces but more total heating of the spacecraft to deal with, like the space shuttle.

Returning straight down through the atmosphere would demonstrate the most air resistance and produce the highest g-force. It would not be survivable without some sort of exotic crew protection system.

Going straight down takes a lot more fuel for deceleration.

In order for a spacecraft to stay in orbit, it needs a substantial velocity perpendicular to the direction of the vector of gravitational force. This velocity is referred to as your orbital velocity; for a near-Earth orbit about 200 miles up, you need an orbital velocity of 7.79 km/s. In order for your rocket to fall straight down, you need to first cancel out that velocity by thrusting with your rocket, which would consume a considerable amount of fuel.

By contrast, if you go down at an angle, you only need to cancel out a small portion of that velocity with your rocket's thrust, since the drag from the atmosphere can take care of the rest. This is why the space shuttle gets so hot during re-entry - the kinetic energy of its motion is converted into heat energy by the air.

The resistance is proportional to the density of the air. If you come in at a shallow angle you decelerate more gently as you spend more time at a higher altitude.

The air resistance does not depend on the angle at which a spacecraft enters the atmosphere. The angle does determine how long a spacecraft is in the upper regions of the atmosphere where the air is much less dense. A spacecraft needs to be there long enough to loose most of it's speed.

The angle at which a spacecraft can approach the earth is called the re-entry corridor, see figure below. (Note that the figure is schematic, the atmosphere is only about 40 km thick, hardly a visible dot on this scale) 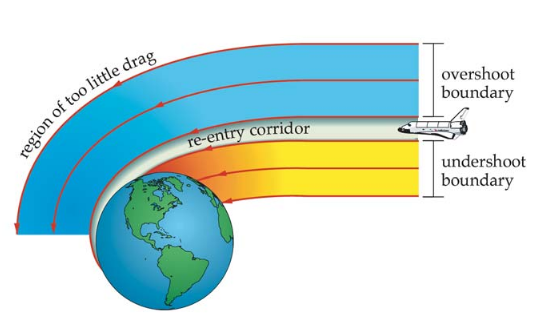 A spacecraft may skip out on purpose, this is called a skipped re-entry. The maneuver may also be used to loose speed to get a spacecraft in to an orbit. If a spacecraft skips out of the atmosphere again it will come back unless it has enough speed to escape the gravitational field.

The angle at which a spacecraft approaches a planet is called re-entry flight-path angle, γ, see figure below. 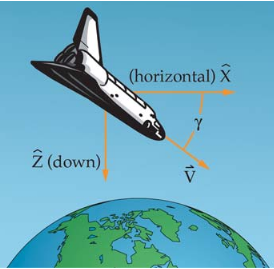 At around 20 to 30 km altitude the density of the atmosphere starts to increase significantly: 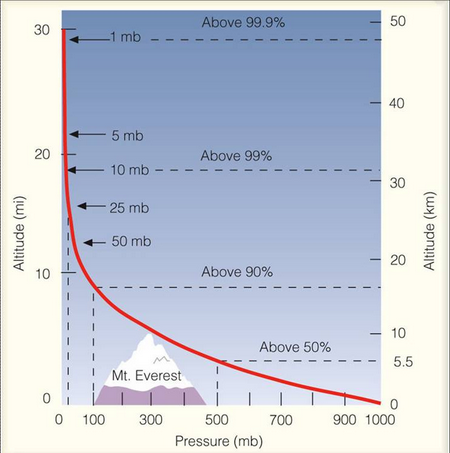 The resistance in air is calculated as D=Cd*0.5*density*velocity^2. It is proportional to the density, and proportional to the velocity squared. At velocities in the order of several km/s, the drag is enormous when a spacecraft comes in to the denser atmosphere with high speed. To avoid high drag and therefore high g-forces and heating, a spacecraft needs to stay long in regions with a low densty so it has enough time to shed most of its speed there without high g-forces

If the flight path angle increases, the maximum g-forces and and heat input increase rapidly: 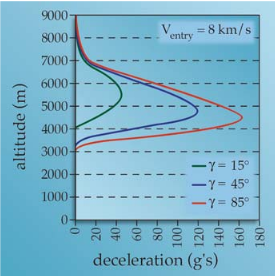 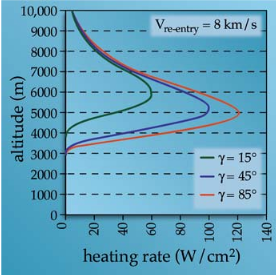 The maximum g-force a person can survive in good health is around 10g, therefore small flight path angles are usually chosen for manned re-entry.

Not the answer you're looking for? Browse other questions tagged reentry atmosphere resistance or ask your own question.

9
Titan - Is the source of so much Methane being overlooked?
23
Gliding into the atmosphere
2
Is this an efficient way to turn bulk minerals in space into kinetic weapons?
12
Bounce off the atmosphere at reentry?
4
Why are deorbited satellites allowed a slow orbit decay instead of burning them up rapidly?
21
Why can't you just parachute down right from orbit?
6
Will SpaceX vehicles orbit Mars before they enter the atmosphere?
1
Why does OGO-1's trajectory and imminent reentry come from sky surveys and NEO tracking rather than normal satellite tracking?
3
Did the Apollo Command module really "skip" within, or off of the atmosphere as a part of its reentry program?
9
This ISS trash deployment looks more like 2 feet than 2 inches per second, was it too fast or are these articles incorrect?