Could ejecta from asteroid Bennu enter into temporary orbit around it? If so, how?

The New York Times article The Asteroid Was Shooting Rocks Into Space. ‘Were We Safe in Orbit?’ mentions concerns about material ejected from the Bennu entering temporary orbit around the asteroid and posing a danger to its current visitor spacecraft OSIRIS REx.

Varying in size from inches to perhaps a few feet in diameter, some of the ejected debris escaped Bennu’s tenuous gravity, and launched in the right direction and speed to enter orbit, becoming tiny moons for at least a short while.

The mission updates came from a newly released Nature paper (paywalled), a presentation at the 50th Lunar and Planetary Science Conference at The Woodlands, Texas, and a call with reporters today. OSIRIS-REx first saw the phenomenon in optical navigation camera images on 6 January 2019, and has since seen it occur 10 more times. Each ejection event can involve dozens or hundreds of particles ranging in size from millimeter-sized sand grains up to several-centimeter cobbles. The ejection speeds have varied from a few centimeters up to about 3 meters per second, meaning that some material falls back to the surface, some enters orbit briefly, and some escapes Bennu's gravity entirely.

That "some enters orbit briefly" is mentioned separately from "some material falls back to the surface" suggests that they are also talking about non-surface intersecting orbits.

Particles in Keplerian orbits starting from the surface will definitely intersect the surface again in less than one orbital period, which may be related to this answer.

Also, as the Search for natural satellites. section of The operational environment and rotational acceleration of asteroid (101955) Bennu from OSIRIS-REx observations (also found in 1, 2) describe natural satellites from large sizes all the way down to small particles are a major concern and are actively searched for.

Searches around Bennu are performed by OSIRIS REx regularly, for example search for the term "particle" in status-updates.

Question: Could ejecta from asteroid Bennu enter into temporary orbit around it? If so, how?

Though I can't access the paper, the abstract of Orbital Stability Regions for Hypothetical Natural Satellites of (101955) Bennu appears relevant:

The Origins, Spectral Interpretation, Resource Identification, Security-Regolith Explorer (known as OSIRIS-REx) mission will orbit and return a sample from near-Earth asteroid (101955) Bennu. Ground-based observations determined that no object greater than 15 m in diameter is orbiting around Bennu. This investigation explores the potential size and stability of natural satellites of less than 15 m in diameter to provide predictions for where such small satellites should be searched for upon arrival. The focus is solely on the existence of stable orbits for natural satellites. How the natural satellite migrated to this orbit is purposefully placed outside the bounds of this study. The numerical model includes J2 of Bennu, third-body dynamics from the sun, and solar radiation pressure. This model is used with the initial conditions of various semimajor axes, inclinations, the longitude of the ascending nodes, and natural satellite diameters. To be stable, it is required that a set of initial conditions must remain in orbit for greater than 1000 years. The possible existence of natural satellites in orbit around Bennu as small as 0.75 cm is found. Certain mechanisms such as the modified Laplace plane, the Kozai resonance, and sun-synchronous orbits help explain the stability of some orbits. 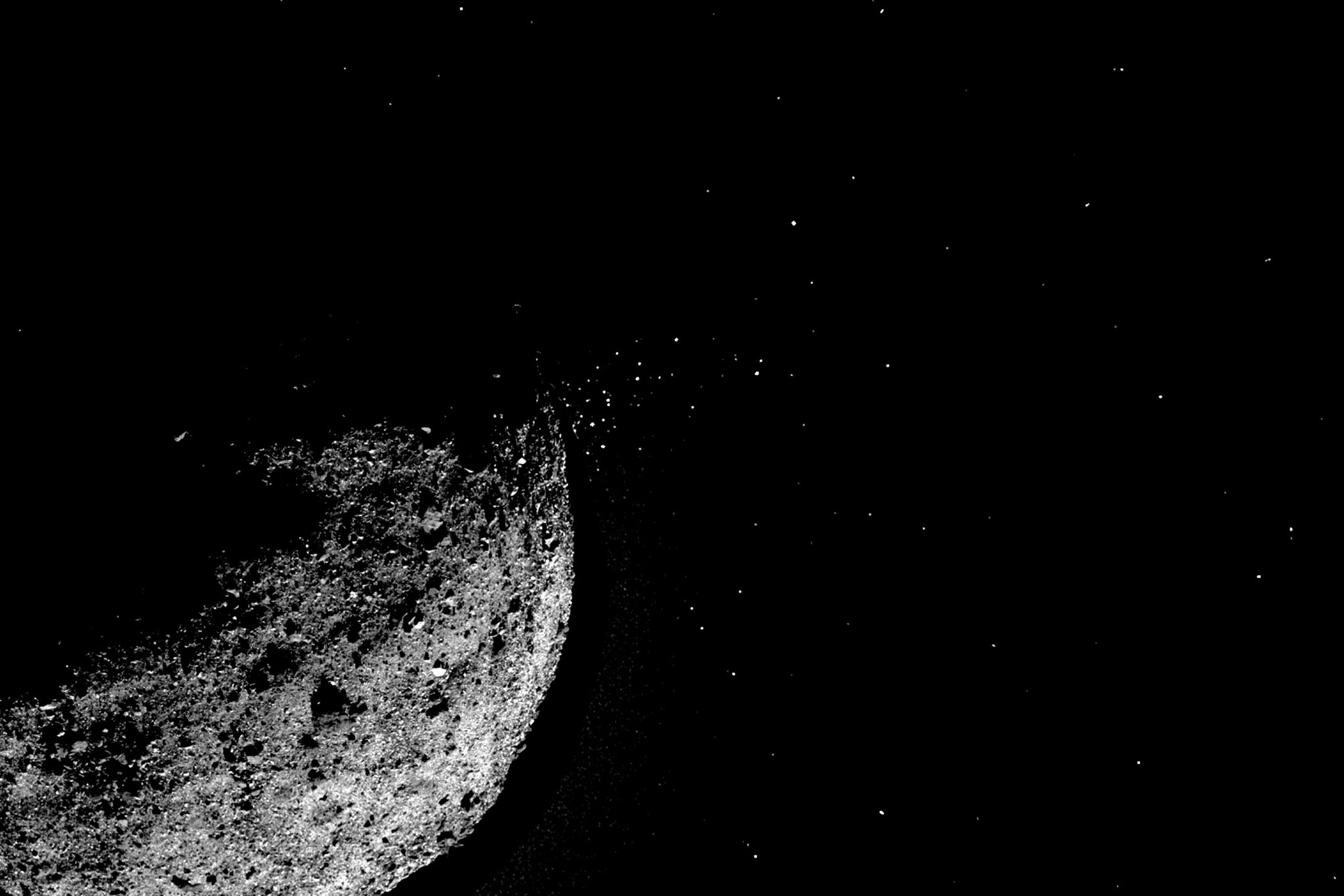 From The Asteroid Was Shooting Rocks Into Space. ‘Were We Safe in Orbit?’. Click for full size so that many more particles are visible.

Particles ejecting from Bennu's surface on Jan. 19, in a composite image taken by the Osiris-Rex spacecraft. Credit: NASA/Goddard/University of Arizona/Lockheed Martin

The literature seems to indicate the answer is yes. There's some existing research on ejecta relative to other asteroids, but because of Bennu's irregular shape and small size those findings aren't as easily extended to the case you're interested in, so I'll focus only on Bennu-specific studies.

According to McMahon et. al. in "Dynamical Evolution of Simulated Particles Ejected from Asteroid Bennu":

Based on their simulation, most of the ejecta follow suborbital or escape/direct escape trajectories, with a portion of those launched into an initially hyperbolic orbit getting pushed back by solar radiation pressure (SRP) to loop back around Bennu before escaping (in what you could argue is a temporary orbit). However, as seen in Fig. 2 and 3 of the McMahon et. al. paper, a couple of the simulated particles were shown to remain in orbit until the end of the simulation (after 1 Bennu year).

The McMahon et. al. paper addresses the possible mechanics of this phenomenon in the discussion section, but the paper's explanation is fairly well summarized by this quote:

SRP can quickly add significant energy to these small particles, causing them to escape from lower initial velocities and energies. Second, and unsurprisingly, the latitude of the ejection event site plays an important role in the chance of escape; the lower-latitude events provide more velocity to the particles from Bennu’s spin, and thus particles at lower launch velocities can escape, but also those at higher velocities launched westward move slower and do not escape. Third, the relationship with launch energy is interesting because there is a sweet spot in terms of maximizing the chance to re-impact.

The Rieger et. al. paper you referenced, Orbital Stability Regions for Hypothetical Natural Satellites of (101955) Bennu, takes a slightly different approach to the problem and focuses more on the effect of orbital planes and Kozai resonance on the stability of potential natural satellites of Bennu. (It's available on NASA's technical report server if you'd like to read the full paper.) Their simulations also support the possibility of ejecta entering orbit around Bennu, which they explain as follows:

The Sun-terminator plane was found to be the orbit where smaller sized natural satellites exist. The terminator plane was determined to be the reason for this orbit due to the rate of precession of the longitude of the ascending node being equivalent to the rate of Bennu’s orbit around the Sun. The terminator plane was the orbit for the smallest natural satellites at 2-13 km. However from 8-13 km, the rate of precession was lower, and will eventually cause the orbits to become unstable. The stable points near 0◦ and 180◦ are due to the modified Laplace plane. These equilibrium points existed for diameters from 1.5 m to 15 m. Finally the Kozai resonance may be responsible for stable orbits of large or faraway objects that precess 360◦ through the longitude of the ascending node.

In conclusion, the evidence seems to strongly support the possibility of there being ejecta in orbit around Bennu, though the actual presence of ejecta orbiting around Bennu needs to be verified based on actual data (from O-Rex or perhaps another future mission).

Not the answer you're looking for? Browse other questions tagged debris asteroid osiris-rex bennu or ask your own question.

11
What is the danger of creating micrometeorite clouds orbiting the Moon by constantly landing spacecrafts on its surface?
5
How far did Hayabusa-2 back off before the "bomb" went off?
2
Bombing the Moon: how much debris would there be in stable orbit?
4
How did Osiris-Rex enter orbit around asteroid Bennu?
3
Is the impact of Chang’e 5-T1 rocket stage on the Moon's far side on March 4th likely to launch any debris into Moon or Earth orbit?

4
How will OSIRIS-REx scan and characterise the near-earth asteroid Bennu?
2
Does Bennu pose a risk to Earth? And how can OSIRIS-REx's mission save us?
15
Why paint only one-half of Bennu?
2
How low does OSIRIS REx's record-setting orbiting around Bennu go?
0
How exactly will OSIRIS-REx's Navcam be used to navigate?
2
Are the estimated chances of Bennu hitting Earth in the next 200 years still about "1 in 1410" now that OSIRIS REx has scanned it?
4
Will mining water on Bennu not be more economical than collecting it at the lunar south pole?
3
What would be the required equipment for an astronaut to dig to the centre of Bennu?
6
Could the uncertain mass of the OSIRIS-REx sample affect the trajectory of the return capsule?