Has the feel of walking on the regolith ever been described?

According to Apollo 11 Lunar Surface Journal, Armstrong made his first description of the regolith as soon as he stepped out from the ladder and pronounced his famous "giant leap" phrase:

109:23:38 Armstrong: I'm at the foot of the ladder. The LM footpads are only depressed in the surface about 1 or 2 inches, although the surface appears to be very, very fine grained, as you get close to it. It's almost like a powder. (The) ground mass is very fine.

109:24:48 Armstrong: Yes, the surface is fine and powdery. I can kick it up loosely with my toe. It does adhere in fine layers, like powdered charcoal, to the sole and sides of my boots. I only go in a small fraction of an inch, maybe an eighth of an inch, but I can see the footprints of my boots and the treads in the fine, sandy particles.

Some observations from Aldrin (with some comments):

110:04:05 Aldrin: Some of these small depressions (garbled) soft and you tend to sink, oh, maybe 2 or 3 inches. (Garbled) suggest exactly what the Surveyor pictures showed when they pushed away a little bit. You get a force transmitted through the upper surface of the soil and about 5 or 6 inches of bay (meaning a crescent-shaped patch) breaks loose and moves as if it were caked on the surface when, in fact, it really isn't.

[Buzz's other observation, confirming what experimenters saw when they commanded the various Surveyor spacecraft to push their mechanical scoops forward through the soil, is that, out in front of the scoop or boot, a section of soil tends to move as one. And, at the front edge of this co-moving section, there is a sharp line of demarcation. Journal Contributor Thomas Schwagmeier notes that, at the right temperature, snow behaves in a similar fashion.]

110:04:43 Armstrong: (Aproaching the MESA) I noticed in the soft spots where we have footprints nearly an inch deep that the soil is very cohesive; and it will retain a slope of probably 70 degrees along the side of the footprints.

And one more from Aldrin:

[Aldrin, from the 1969 Technical Debrief - "There are several points (means "factors") that tend to make footing more difficult. One is the powdery, graphite-like substance. (Lunar dust is very fine, like graphite. However, unlike graphite, it is very abrasive.) When it comes in contact with rock, it makes the rock quite slippery. I checked this on a fairly smooth, sloped rock. It was quite easy to get this material on it, and the boot would slip fairly easily. That factor tends to make one more unstable. The second point is that the surface may look the same, but we found that in many areas - with just very small changes in the local surface topography - there would be unexpected differences in the consistency and softness of this top layer. For example, we might find in some areas where there was just a small slope that, when we were on the edge of this slope, there would be little change in the depth at which we penetrated. In other places, we would find we had put our feet down and we would tend to depress this surface to a new location (means "penetration distance"), as if there were a different depth of the resistive surface. These two factors gave us a low confidence level in our balance and footing setups."] 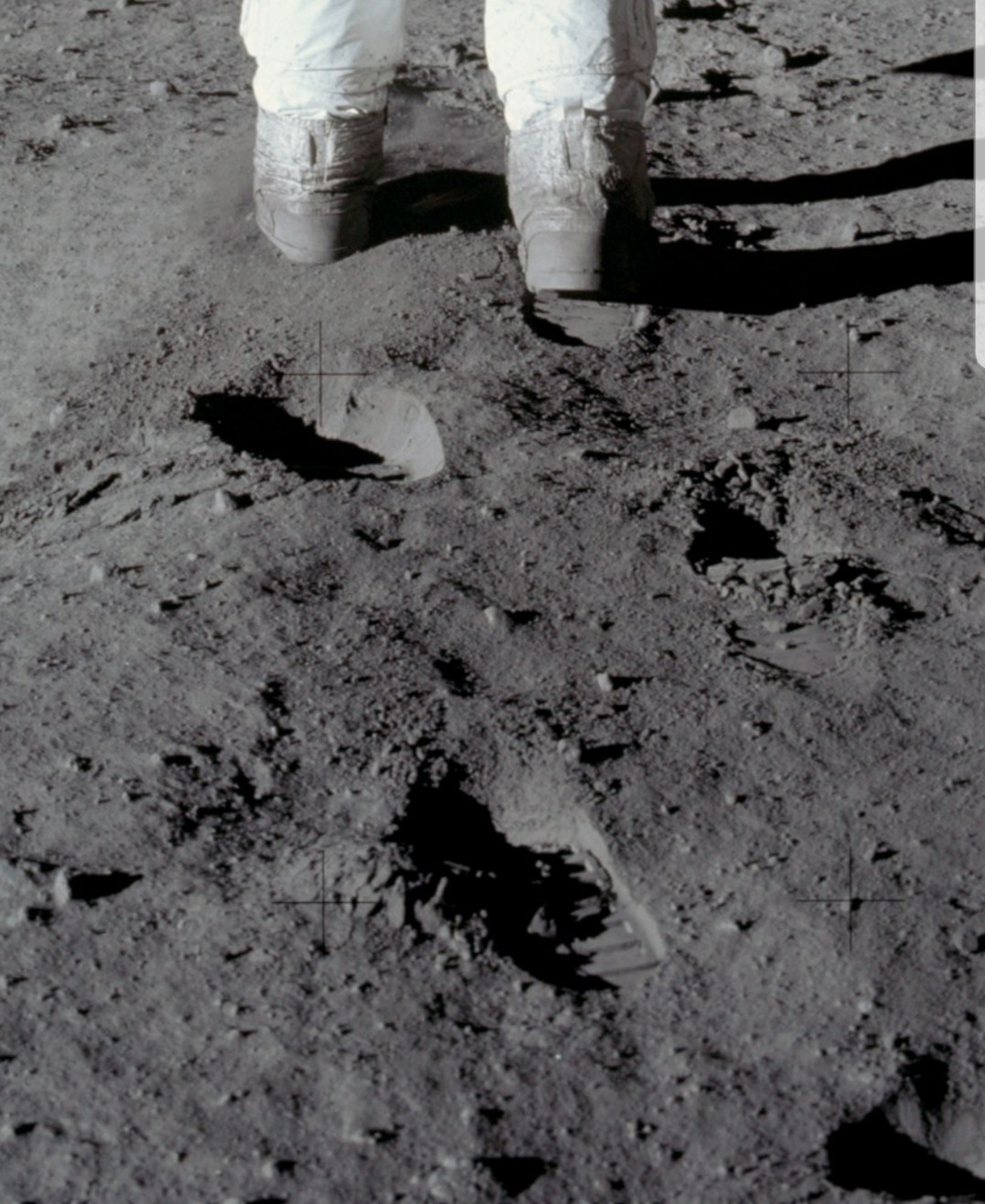 115:28:06 Bean: I'll tell you, your boots are digging in the soil quite a bit. If you don't pick up your feet, you really kick a load of dirt ahead of you. Your left foot's got a big mound ahead of it right now that it's just pushing along.

115:53:32 Conrad: Okay. My comments are exactly the same as Neil and Buzz. In fact, every time I get down in one of these little craters, I sink in a lot further. I'd say our footsteps are sinking in.

Perhaps worth mentioning that Conrad and Bean didn't think that actual walking on the moon was feasible:

[Conrad - (1969 Technical Debrief) "And there's another thing. There's no such thing as 'walking' on the lunar surface. Wherever you go, you just want to go at a lope. If you walk, it takes more energy to move slowly and take a normal step than it does to lope."]

[Bean - "We tried the bunny (hop), but it was too much work. The loping was the easiest. For short distances, sometimes you just walked, you just kind of bounced over. Where you did the loping was for long distances."]

Density is not the only factor in how a substance feels to walk on. What matters is how the material behaves when a weight is placed on it.

These in turn depend on grain size and surface properties more than they depend on density.

From Armstrong's description of the top layer as "a very fine powder" I'd say the grain size might be comparable to talcum powder. Of course there are differences too: moon dust is very abrasive, unlike talcum powder.

Not like much, i expect. Those lunar spacesuits covered the astronaut's feet in something about as solid and insulating as a heavy Snow Boot, and over that was worn something that resembled a truck tyre more than any human footwear. They could have walked on rice crispies, on glass, and on burning coals, and would have had to rely on the sound to tell the difference.

Just how much does one "feel" of the surface, through this: 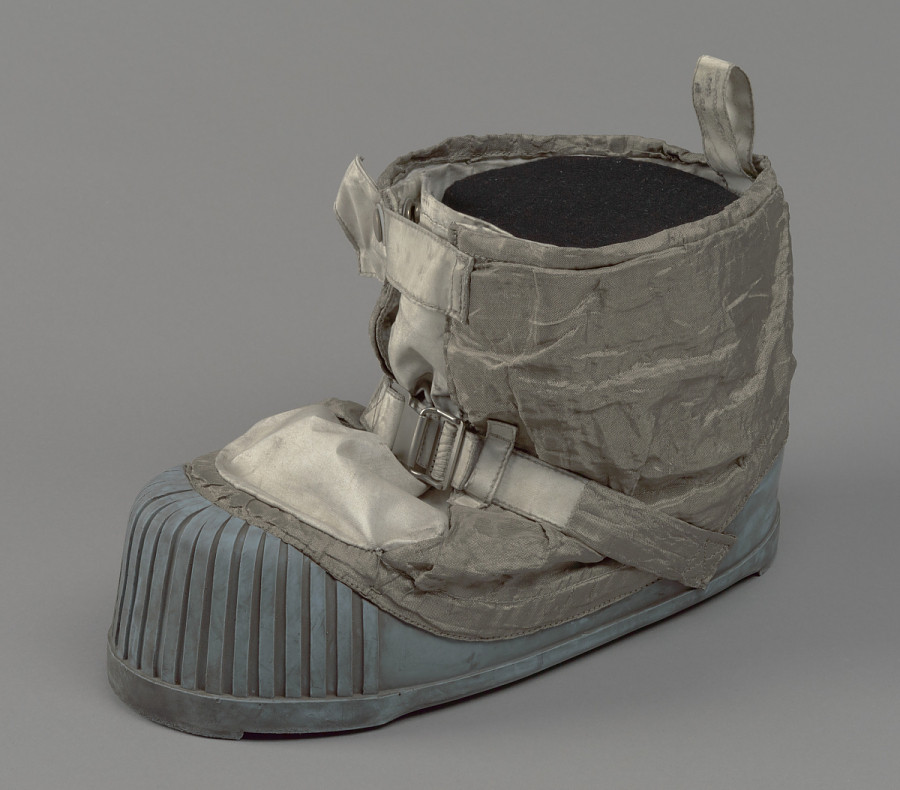 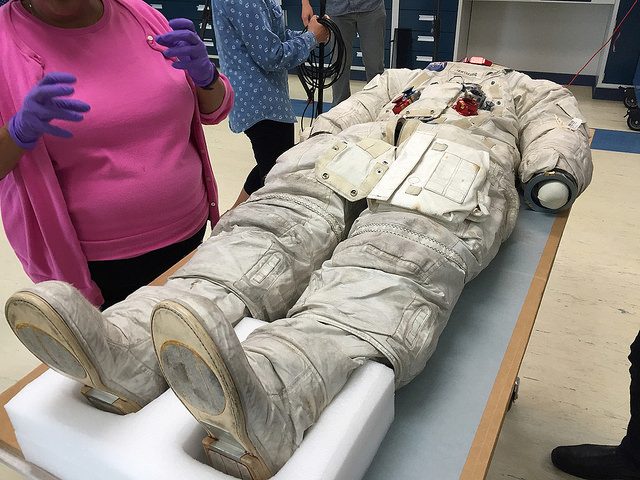 I think their sensation of the surface was a lot more visual and barely any tactile at all.

6
Exactly how does one lope on the Moon?

16
The maximum depth Apollo astronauts dug into lunar regolith?
8
Any regolith lunar samples tested for organics?
12
How strong is the electric charge capacity of Martian dust storms?
8
Might thermal mass, reflective insulation, and limiting light penetration allow heat control on the Moon? (reboot)
38
Could weights make walking on the Moon feel like walking on Earth?
3
Can you really melt lunar regolith with microwaves?
6
DIY Lunar regolith simulant
2
What does lunar dust smell like?