I’m working on an alternate approach to the concept of using a solar shield to shade the earth from the Sun (to help with climate change adaptation). It would use streams of lunar soil from multiple different lunar locations to overlap the shading effects on a specific targeted area for a designated period of time.

The soil would be aimed so as to intercept the moon’s orbit to be recollected (preventing loss of material). Each line of shade would be unnoticeable to someone on the ground (blocking <0.5% of solar radiation) but overlapping lines for long periods of time would create a noticeable effect for ground surface temperatures.

I know the slowest speeds possible would provide the greatest shading effect and increasing the speed of the projectiles decreases the effectiveness. I also know technology will be a limitation based on costs. My question is, do orbital mechanics also limit the window for the period of time soil could be projected and still land back on the moon? I assume the target window is at least a few days because the target gets closer at the same rate the launch platform gets further away but that's not the kind of assumption I want to rely on. 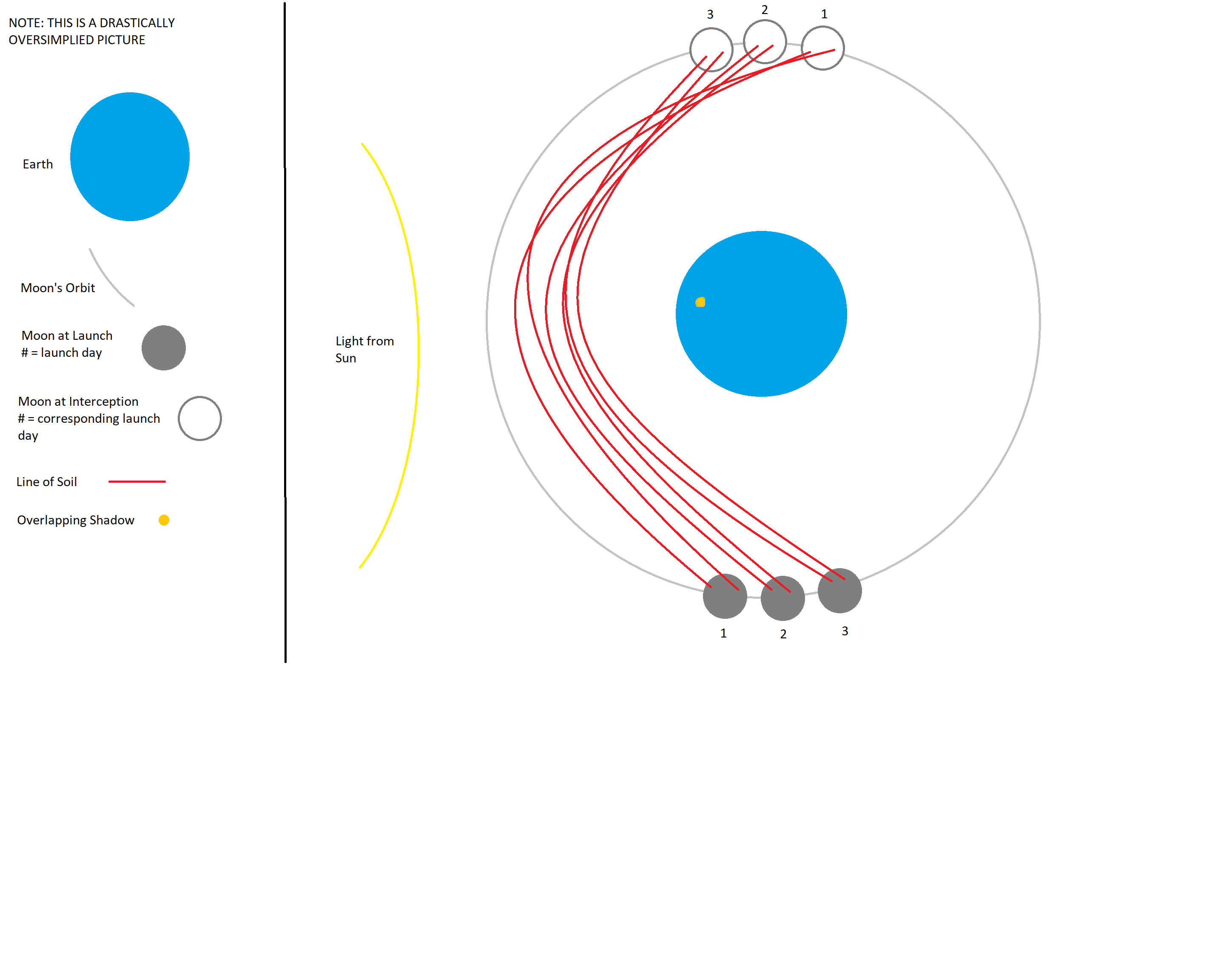 CLARIFICATION The usage of TEP with 6 origin points for soil would create 6 intercepting lines create 6 long rectangular shadows blocking ~0.5%-1% of light. But the shadows would overlap in an area, creating a stronger shadow around ~3%-6% of light. If you can combine fire from 2 different days to double that overlapping effect, you could block ~6%-12% of light (before accounting for a loss of efficiency). If you could do this across 10 days you wouldn't just increase efficiency you would drastically lower the costs for initial testing and return on investment. Thus the incredible distances in space become an asset that acts as both a stepping stone and a force multiplier with diminishing returns. The goal of this question is to determine how theoretically feasible it is to extend that force-multiplying range and how far it might be.

Also, the image is by no means accurate. Think of it as a really bad napkin drawing.

For the trajectories in your drawing the objects will miss the Moon. They pass much closer to Earth, so their orbital motion will be substantially faster than the Moon's so they will pass through the interception points days before the Moon does and definitely miss it.

However if those are elliptical orbits with the same semi-major axis as the Moon, then after a full 27 day period they'll come back to their launch point at the same time the Moon does and so be redeposited on the opposite side of the Moon.

If you want to increase the time that they spend shadowing the Earth, then use the same shape elliptical orbits but put the Earth at the other focal point (ellipses have two) and launch towards its apogee rather than towards its perigee as shown.

Here's as far as I got plotting so far, I'll add more this answer if you give me some feedback as to what it needs to explain more about the orbital mechanics.

Both orbits have the same semimajor axis and periods. The thick lines illustrate the distance each moves during the same amount of time. Kepler's second law of orbital motion (1, 2) instructs us here.

Python here: https://pastebin.com/UmUSTb7k (the script is fragile, not general purpose) 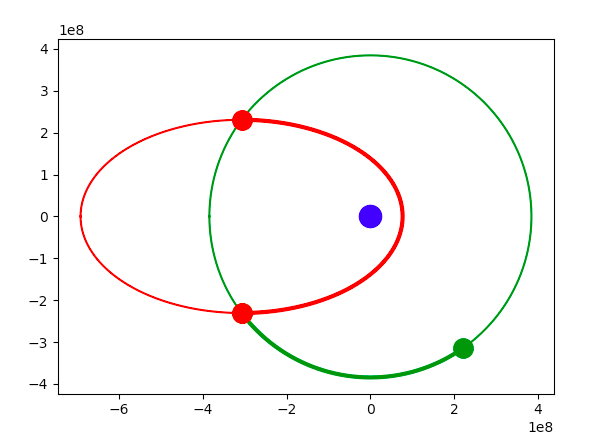 Not the answer you're looking for? Browse other questions tagged orbital-mechanics the-moon trajectory design-alternative or ask your own question.

112
What are the choices today for orbital mechanics simulation software?
8
Might thermal mass, reflective insulation, and limiting light penetration allow heat control on the Moon? (reboot)
84
What can the KSP game actually teach about spaceflight and orbital mechanics, and what are its limitations?
51
Game for teaching basics of orbital mechanics
5
What might be a viable avenue of propulsion research in aiming for mission delta-V north of 100 km/s?
13
What orbital mechanics toolkits available today are suitable for a real-time simulator?
1
Would mass drivers be able to transport base material on the moon more efficiently than drones?
5
Orbital Mechanics and Launching into the Sun