Can I see the ISS from the surface with the naked eye?

Can I see the International Space Station (ISS) from the surface with the naked eye? If yes, how can I determine that it really is the ISS?

Yes, it's perfectly possible to observe the International Space Station with a naked eye from most latitudes, unless you're observing from one of the two polar regions, in which case the angle at which it would be visible would likely be too low on the horizon and blocked by local topography. From one of my answers on Astronomy.SE:

Two basic conditions need to be met for anyone on the globe to observe the International Space Station (ISS) from any location:

Now, obviously there are other requirements, like e.g. weather (if it's overcast we won't be able to see it through the clouds). And it won't be visible when it's in the Earth's shadow and doesn't reflect any light during the wee hours of the night.

Let's discuss the two basic conditions mentioned a bit more. ISS has an orbital inclination of 51.65°. Why is that is explained in this answer, but to quickly recap, this orbital inclination was chosen because it's near ideal for launches from the Baikonur Cosmodrome, where most launches towards the ISS are made from, it is still achievable from the US launch facilities and most US built launchers, and it allows the ISS to go over majority of the populated areas on Earth. So it was decided both for economic reasons, as well as to allow ISS to do as much science as possible.

But what this inclination means is that the ISS will make a ground track (path along the surface of the Earth directly below it) that moves towards the West with each new orbit, even though the ISS itself moves West to East (or saying it otherwise, it's in a prograde Low-Earth orbit). Its ground track could look something like this: 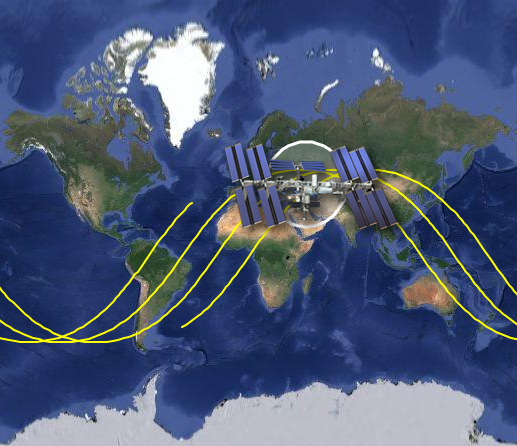 Ground track of the International Space Station with an area where it is observable from the Earth's surface
shown in the white circle (Image source: ISS Tracker)

ISS orbital period, the time it takes it to circumnavigate the globe and complete one orbit, is roughly 93 minutes. As you can see in the screen grab from the ISS Tracker above, its ground track moves westward on each new orbit, which is due to Earth's rotation on its axis, so this shift towards the West will be equal to how much the Earth rotates in the meantime, which in those 93 minutes comes out at roughly 22,5° or a good 2,505 km (1,556 mi) of the Earth's total equatorial circumference.

But ISS's orbit isn't Sun-synchronous, meaning it won't be over any given Earth latitude at the same local mean solar time, so when it will be observable depends also on its orbital position relative to the position of the Sun. We require that it is dark, remember? ISS isn't bright enough (doesn't reflect enough light with its truss and solar panels) during the day to be brighter than the day skies are. So we have another parameter, which is local time. As you probably anticipated by now, the length of the day isn't really equal at any day of the year, and moving further away from the equator only increases this difference of the length of the day in winter, or the length of it during summer.

And so on, and I'm omitting part of that answer that isn't relevant to your question to save you the trouble. But it might help you understand the station's movement over our night skies better. Since that question is about the ISS timetables for given coordinates, you might have guessed by now that there are various services on the internet and software that will help you determine when and where to look for it. NASA hosts one of such tools too, on their Spot The Station website. Or perhaps ISS observation tool on Astroviewer.net that I find fairly straightforward to use. And there are many others.

As for identifying it from among other visible objects, the easiest is simply knowing that it should be about as bright as some of the brightest stars and planets on the night's sky (depends on exact angle of their solar panels to the Sun and your observation point, it's distance and atmospheric conditions, but it doesn't get much brighter than, say, planet Venus), with major difference that it won't follow the sidereal time (its apparent motion won't follow the rotation of the Earth), so it will move much faster than the stars, it won't have location lights flashing on it like planes do, won't produce any noise, no airplane contrails behind it, and it won't change course and/or speed. Average observable time from a single location during one of its orbits will be roughly 3 minutes, before it again disappears over the horizon. And if you first observed it rising and setting close towards southeast or it shot straight over you, chances are you'll be able to observe it once more some 90 minutes later rising from the southwestern direction.

There are also some softwares that could help you confirm it's indeed the ISS, I personally use Sky Map + for my Android smartphone. It is free and uses your phone's internal gyroscope, compass and/or GPS to enable you to follow and identify visible features of the night's sky (can be filtered by type) by holding the phone in front of you and towards the observed object. Simple. 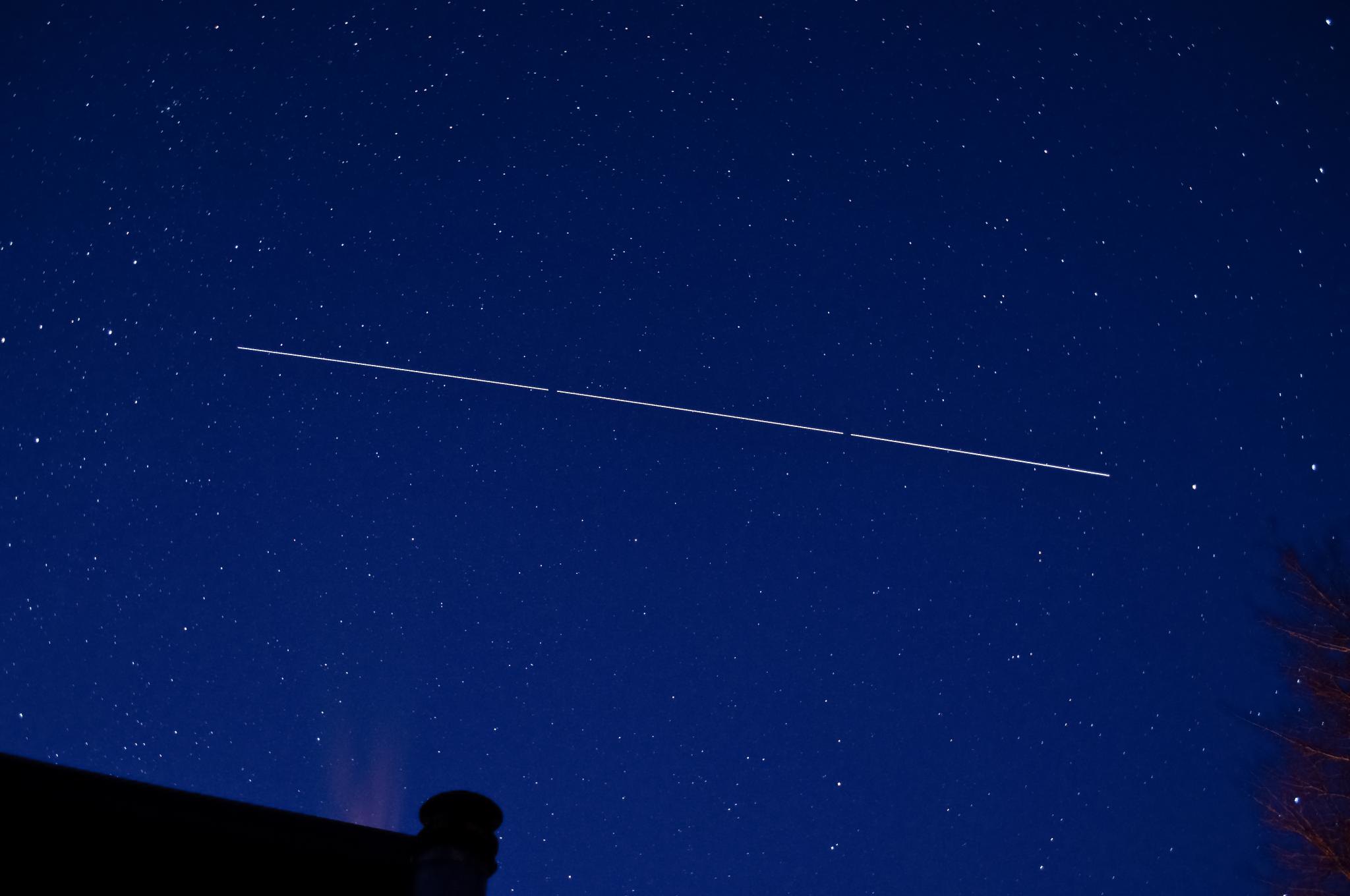 Yes, you can. When it is illuminated by the sun, it is brighter than any star and moves with a quite high speed across the night sky which makes it quite easy to spot. Because of its low orbit it can only be seen from a small area at any given time, but thanks to its strongly inclined orbit it regularly passes over most inhabited areas of earth. You can check its current position and when it will have its next overpass near your location on Heavens Above. First set your location and time zone, then go to the subpage of the ISS to check when it will do its next overpass near you.

Yes, you can see the ISS with the naked eye under certain conditions. As for identifying it, it will be quite bright compared to stars and it will be visibly moving. It will not have flashing anti-collision lights like a plane. It will be a more-or-less constant intensity bright light and will appear to be moving across the sky faster than a cruising jet airliner would appear to be moving.

To know when it's going to be visible at your location, you can sign up for e-mail or text message notifications directly from NASA at Spot the Station.

The conditions for seeing it are:

1) It must be night (otherwise the sky will be too bright to see it.)

2) It must be flying relatively close to directly over your location.

3) As with viewing anything else in outer space, the sky at your location must be relatively clear during the flyover.

4) It must be either shortly before dawn or shortly after dusk (well, for most locations, at least.) The reason for this is that, by definition, night occurs when your part of Earth is facing away from the sun, yet the sun must be hitting the space station for it to be visible with the naked eye. Once it passes into the shadow of the Earth, it will disappear. The closer the flyover is to dawn or dusk at your location, the longer you'll be able to see the ISS for this reason. It will usually pass into the shadow of Earth (and, thus, disappear) before it actually sets on the horizon. The longest visibilities tend to be about 6 minutes.

Flyovers of the space station will occur roughly 90 minutes apart, though usually only one flyover will be visible to the naked eye per morning or night, due to the aforementioned reason of it needing to be close to dawn or dusk to see it.

Here is an example photo of the ISS passing overhead near sunset in Tübingen, Germany: 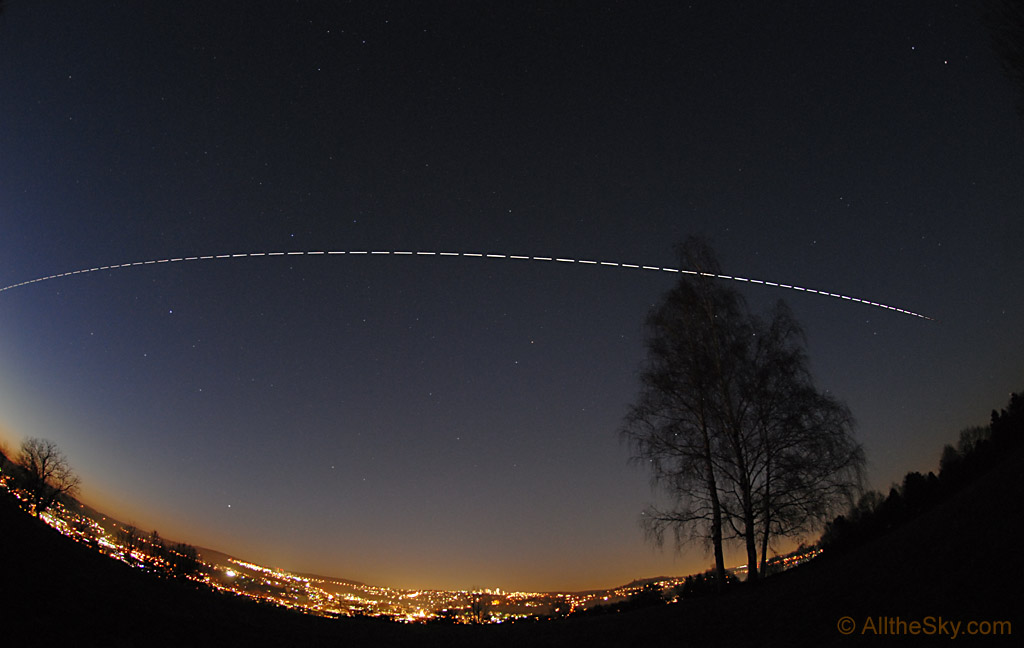 The line is dashed because it is a long series of exposures that were then stitched together. Here is a link to a video of the same event. Credit: © T. Credner & S. Kohle, AlltheSky.com (use for private and non-profit educational purpose only).

I signed up for alerts at spotthestation.nasa.gov. There you can register your location and have alerts sent to your email when the space station will be passing over you. It also tells you what part of the sky it will first appear and will it will disappear along with the angle above the horizon and the duration it is visible. Here is a sample of what the email will contain.

I just witnessed ISS with naked eye! It appeared for roughly 35-40seconds and then disappeared! Location: Islamabad, Pakistan The weather here is clear.

Yes it is even possible over your smartphone to locate the exact direction, latitude, longitude if weather permits.

22
Why does the International Space Station have a downward facing light?
38
Why doesn't ISS pass over the polar regions?
16
Can you make out the shape of the ISS with the unaided eye as it passes overhead?
17
Why did the recent Sirius FM6 launch use such a high inclination?
6
Why does the ISS viewing times go through repetitive patterns of being always morning or always evening?
9
I'm not sure if what I've seen is the ISS or not
4
Why are low earth orbit satellites not visible from the same place all the time?
5
Any idea what's in the SE sky from Denver around 12:40PM EDT?
3
Naked Eye View of ISS: Resolution?
2
ISS observation and orbit plane
See more linked questions

16
Can you make out the shape of the ISS with the unaided eye as it passes overhead?
10
Will SMAP produce predictable satellite flares visible to the naked eye from the surface of the Earth?
6
Can satellites or the ISS be seen from Earth during a Total Solar Eclipse?
9
Can we detect the projected ISS shadow on the earth surface?
21
Is it safe to see the ISS with the naked eye?
32
How can I, a high school student in Bucharest, go on to become an ISS astronaut?
8
Can Astronauts really see firework displays from space?