What is this large fan in front of the Space Shuttle during Ground Turnaround?

In this amazing video of multiple camera angles of Endeavour landing and post-landing processing, at around the 15:45–15:56 minute mark, we see a large propeller running in front of the Orbiter.

It seems to be perfectly aligned with the Orbiter's centerline (see orange mark).

What is its purpose, and what is it called?

I first thought it might be there to provide airflow to carry fumes into a defined direction in case of a spill of Hydrazine or other nasty chemicals, but actually, there is a lot of people working downwind near the back of the Orbiter. Also, by this point, the guys in the hazmat suits seen earlier in the video, would have already removed those chemicals, I guess.

So, the only other reason I can come up with, is cooling. However, isn't it a little bit small and too far away for that, or am I misjudging the power of a ~4m propeller? And what exactly is it cooling? The tiles, the crew compartment, the crew van? 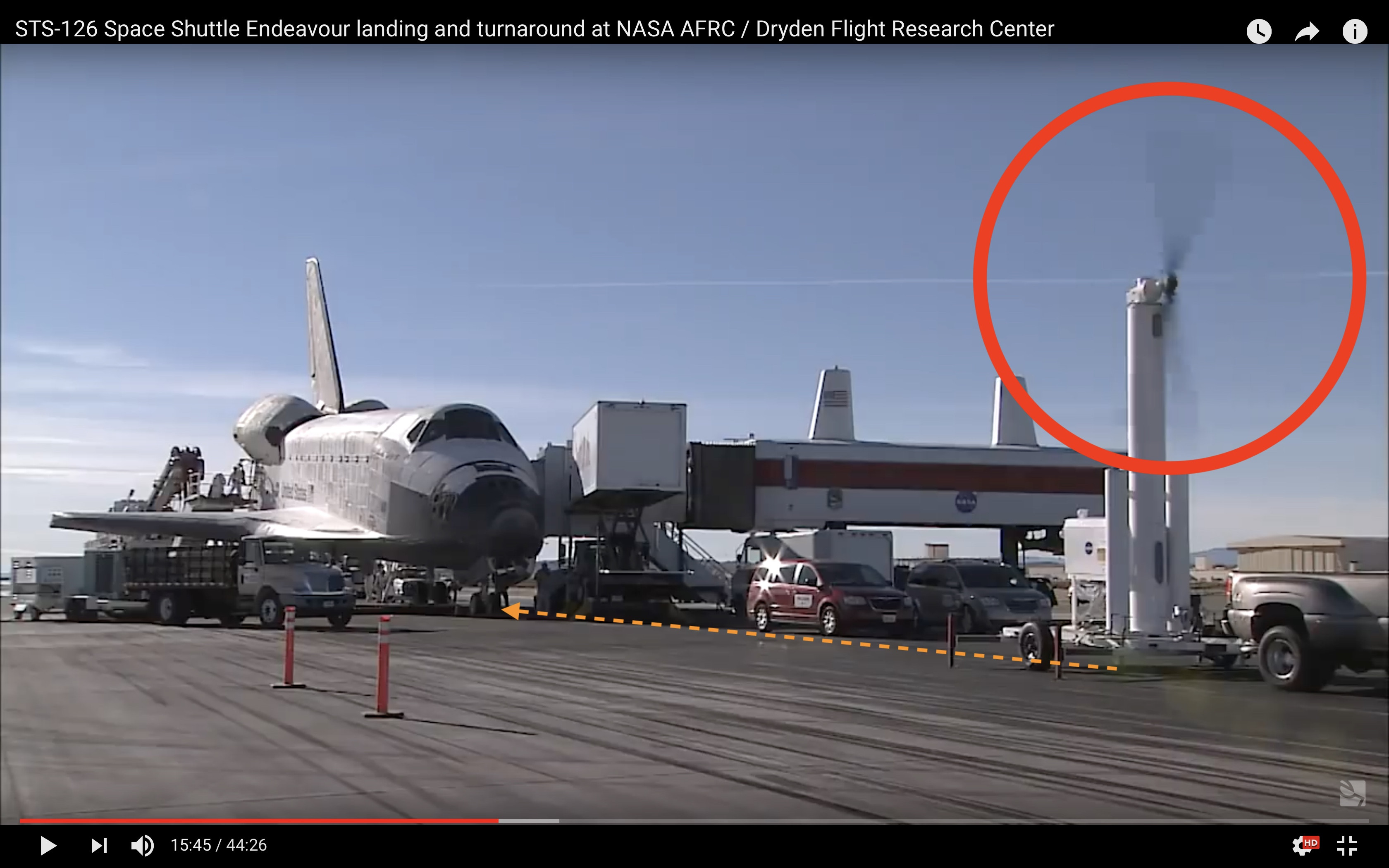 It turns out, my first hunch was half-right: the purpose of this large fan is not so much to carry away, but to disperse both toxic and explosive chemicals.

It is called the Vapor Dispersal Unit, and I vastly under-estimated its power:

The Vapor Dispersal Unit is a mobile wind-making machine able to produce a directed wind stream of up to 45 mph. It is an adaptation of a standard 14-ft. agricultural wind machine designed to protect fragile agricultural crops from frost damage or freezing. It is used by the recovery team to blow away toxic or explosive gases that may occur in or around the orbiter after landing. The fan can move 200,000 cubic feet of air a minute.

For the metrically challenged:

Examples of the kinds of gases that are expected, are hydrogen, monomethyl hydrazine, and hydrazine and ammonia.

Not the answer you're looking for? Browse other questions tagged space-shuttle identify-this-object or ask your own question.

3
Why are these people wearing SCAPE Suits near the X37-B?

5
Ground personnel proximity to space shuttle at launch?
32
What are the 'lights' inside Shuttle main engines at landing?
24
Why is this part of the Space Shuttle launch pad suspended so high off the ground?
24
Why did NASA wet the road in front of the Space Shuttle crawler?
11
What is the utility of this peanut-shaped ground facility?
7
What happened during this shuttle simulation malfunction involving a failure of a shuttle arm joint while moving the JEF?
9
Can the space shuttle use OMS engines during landing?
4
Space shuttle state propagation---constant acceleration during cycle?
2
Maximum lateral loads on space shuttle during launch?