How exactly did Jupiter change Ulysses orbital plane from nearly ecliptic to polar?

Ulysses spacecraft trajectory is truly amazing. Utilizing gravity assist from Jupiter it was sent into polar orbit around the Sun.

I can understand gravity assist concept, I can also (intuitively) understand bending of a spacecraft's trajectory within same orbiting plane due to astronomical body gravity. But changing the orbiting plane nearly orthogonally by flying around a planet is beyond the level of my intuitive understanding.

Can someone explain in simple terms how does this orbital sorcery work? What exactly forces a spacecraft to change the inclination of the orbiting plane?

Also is it working specifically due to Jupiter's huge gravity (I mean if Jupiter's gravity was similar to Earth's gravity, could have it done the same job?); or, for example, could a spacecraft sent to the Moon do the same trick of changing its orbital plane inclination (with the Moon gravity assist) by nearly 90 degrees (say, from nearly equatorial to polar around the Earth)?

Ulysses was first sent toward Jupiter and aimed to arrive at a point in space just ahead and south of the planet. ... The gravity assist maneuver bent the probe's trajectory northward relative to the Ecliptic Plane onto an orbit which passes over the poles of the Sun.

whilst animated gif with Ulysses' trajectory on that same page shows the spacecraft going southward from Jupiter.

The giant planet's gravity bent the spacecraft's flight path southward and away from the ecliptic plane.

Bonus question: So is it just me being confused, or is the 'Gravity assist' wiki page wrong and does state the opposite from the truth?

In simple terms, gravity pulls an object directly towards another object. As an analogy, if you are running down the street and grab hold of a lamp post with your left hand you will swing around it to the left, if you grab it with your right you will swing to the right. You can use this to do a u-turn, letting go whenever you or going the right direction, or if you hold on stop your forward momentum and "orbit" the lamp post,

It's similar with gravity, except that objects are not fixed like the lamp post is - both objects pull each other. A satellite approaching a planet pulls the planet towards it (infinitesimally, but there is a force) and the planet pulls the satellite in proportion to the mass of the planet. Also, gravity gets stronger the closer the objects get. We can use these interactions to adjust trajectory in many ways, in this case if you fly the spacecraft above (i.e. north of) Jupiter its gravity will swing you down (i.e. south). By flying the spacecraft close enough to the north of the planet the team used Jupiter's high gravity to do a significant plane change and bend its course back towards the sun.

As for whether it was a north or south plane change it looks like the article on gravity assist is wrong, the plane change was to the south. 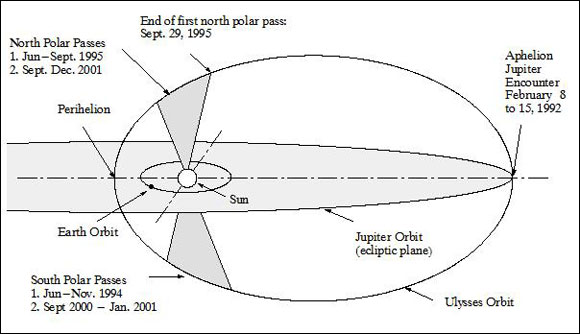 Not the answer you're looking for? Browse other questions tagged orbital-mechanics gravity-assist jupiter inclination-change ulysses or ask your own question.

7
What are the gravitational assist effects on the inclination of a probe's trajectory, from passing by Jupiter at different latitudes?

18
Why does NASA's Juno spacecraft only have a one year primary mission?
7
Why does the Juno spacecraft flyby Earth on the way to Jupiter?
4
What near flyby wouldn't modify the speed of the vessel, just direction?
7
What are the gravitational assist effects on the inclination of a probe's trajectory, from passing by Jupiter at different latitudes?
5
Juno's original orbit around Jupiter - is this apsidal precession? If so, need expression
2
How close to Jupiter does a spacecraft need to get in order to gain maximum gravity assist and Oberth effect bonus for leaving the Solar System?
3
What would the perihelion of Ulysses's orbit have been without a trajectory adjustment after its Jupiter swingby?
2
Why aren't satellites launched into a Polar LEO to get into Polar Heliocentric Orbit?
3
Could any modern launch vehicle have put Ulysses in it's polar heliocentric without going to another planet first?