What was the first rocket with de Laval (convergent-divergent) nozzle to fly?

Goddard was the first to use a De Laval nozzle on a solid-propellant (gunpowder) rocket engine, doubling the thrust and increasing the efficiency by a factor of about twenty-five. This was the birth of the modern rocket engine.

This source elaborates a bit more on this:

In 1915, as assistant professor at Clark University, Worcester, he [Robert Goddard] began experiments on the efficiency of rockets. He bought some commercial rockets and measured their thrust using a ballistic pendulum, a heavy mass suspended by ropes, to which the rocket was attached. The rocket was fired, and the height to which the pendulum rose provided a measure of the total momentum (mass times velocity) imparted to it.

Goddard experimented on his ballistic pendulum with various nozzle designs, using a small metal combustion chamber filled with a type of gunpowder, ignited by electricity. The end of the chamber was threaded, so that nozzles of various designs could be screwed onto it and tested. Using a De Laval nozzle, he obtained jet velocities between 7000 and 8000 ft/sec and efficiencies of up to 63%. Later he replaced the ballistic pendulum with a more compact device, in which the thrust of the rockets did not lift a pendulum against gravity but compressed a calibrated spring. With that device he showed that (contrary to some popular claims) rockets worked just as well in a vacuum.

De Laval's nozzle turned spaceflight from a vague dream into a real possibility. Goddard communicated his results to the Smithsonian Institution in Washington and asked for support to develop a rocket capable of probing the high atmosphere. ... In January 1917 the Smithsonian responded with a grant of $5000, and Goddard began his rocketry career.

The above describes what we would call nowadays a static fire test.

Then the storyline omits further details of the solid rocket development and continues with liquid fueled rocket:

The idea of feeding the rocket with a continuous stream of solid charges also proved unfeasible, and in 1922 Goddard went back to his alternative idea, proposed independently by Hermann Oberth in Germany and also noted by Tsiolkovsky: a liquid-fuel rocket

Based on information gathered from limited amount of sources, it looks like:

Below is photo of the earliest Goddard solid rocket with de Laval nozzle I could find (the bazooka prototype): 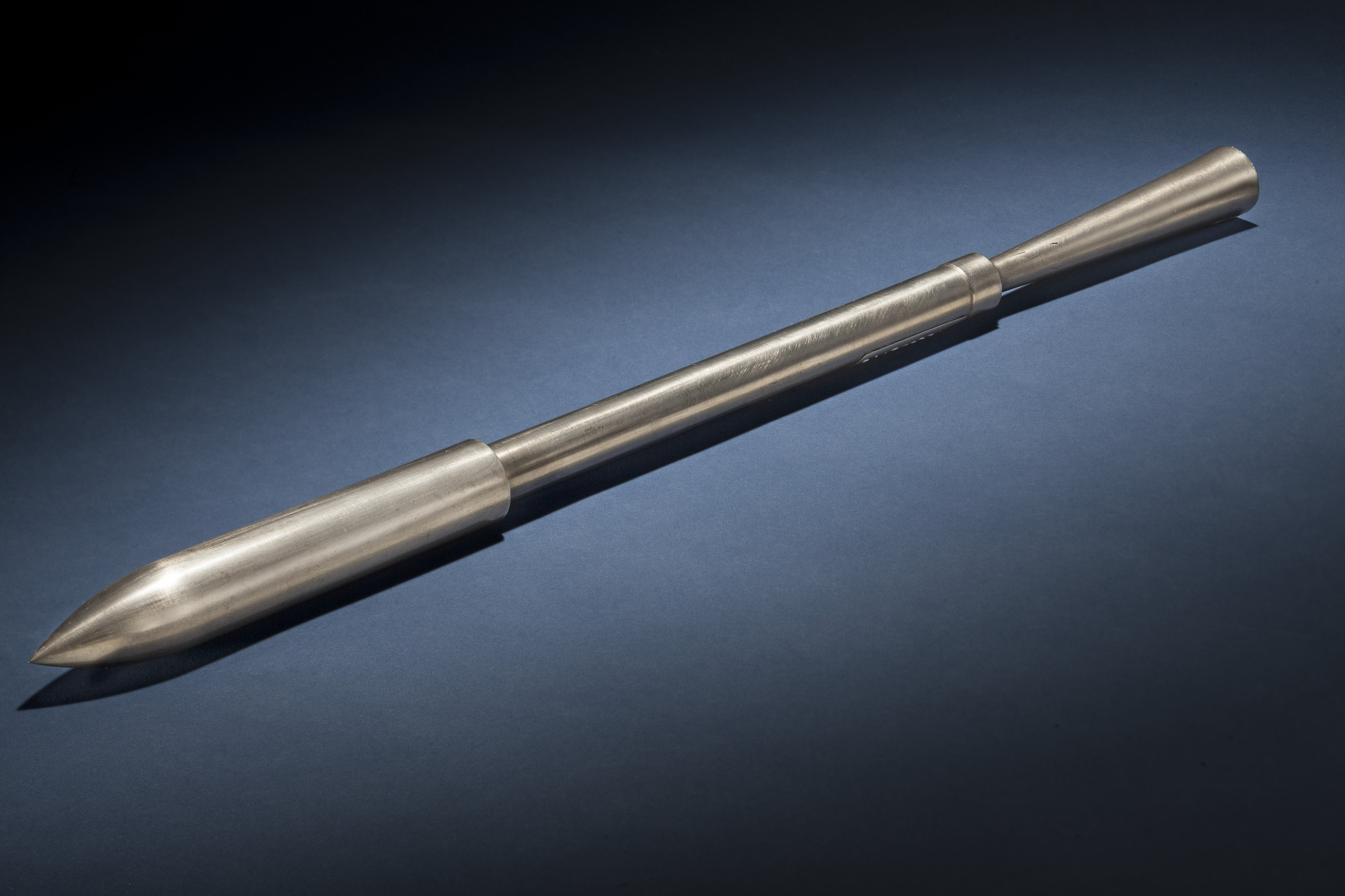 This is a 1-inch solid fuel rocket built and tested by U.S. rocket pioneer Robert H. Goddard during 1917-1918 for the U.S. Army for potential use as a weapon during World War I. The experiments were undertaken near the Mount Wilson Observatory in Pasadena, California. Later, a trial was made before Army officers at the Aberdeen Proving Grounds, Aberdeen, Maryland, on 6 November 1918.

The trials went well and this model reached about 750 yards.

He [Goddard] began by experimenting with gunpowder, and launched his first powder rocket at Clark University in 1915, this time outside of the building. But powdered rockets were inefficient; only 2 percent of the available energy was being converted into motion.

In 1915, Goddard initiated his first test launch of a powder rocket in the campus at the university. After many tests of optimization that took him months, Goddard managed to achieve an engine efficiency of more than 63%.

These are the earliest flights that are mentioned to use rockets modified by Goddard; indicated jet velocities are inline with the optimised de Laval nozzles.

After demonstrations to Army officers of work achieved at Mt Wilson, Goddard is requested to demonstrate his rockets at the Aberdeen Proving Ground in Maryland.

Goddard, during his tenure at Clark University, and working at Mount Wilson Observatory for security reasons, designed the tube-fired rocket for military use during World War I. He and his co-worker, Dr. Clarence N. Hickman successfully demonstrated his rocket to the U.S. Army Signal Corps at Aberdeen Proving Ground, Maryland, on November 6, 1918, using two music stands for a launch platform. The Army was impressed, but the Compiègne Armistice was signed only five days later, and further development was discontinued as World War I ended.

Not the answer you're looking for? Browse other questions tagged rockets history engines nozzle robert-goddard or ask your own question.

10
Convergent-Divergent / De Laval Nozzle Dimensions
11
What is the temperature inside a methane/oxygen rocket engine?
3
What is the minimum rocket mass that can achieve GEO
6
Which part(s) of the Goddard Rocket is(are) the rocket, and why (actually) no fins?
14
What solid fuel was used in the Katyushas rocket artillery of WW2?
19
Where does the thrust act in a rocket engine and how is it transferred to rocket structure?
6
Is there a way to make liquid fueled rockets not lose efficiency with decreasing throttle?
2
Why were Robert Goddard's later launches in New Mexico?
1
How many times is a single rocket engine tested?