Does the "Tennis Racket Theorem" apply to the ISS? Does it rotate around its intermediate (unstable) axis?

The tennis racket theorem or intermediate axis theorem is a result in classical mechanics describing the movement of a rigid body with three distinct principal moments of inertia. It is also dubbed the Dzhanibekov effect, after Russian cosmonaut Vladimir Dzhanibekov who noticed one of the theorem's logical consequences while in space in 1985...

This question touches on the fact that the ISS rotates around one of its axes every 90+ minutes as it also rotates around the Earth at the same time, thereby keeping the same side facing the Earth.

The Veritasium video The Bizarre Behavior of Rotating Bodies, Explained goes into more detail, a cool example can be seen by skipping ahead to 05:10 and it even references Terry Tao's Math Overflow post. (for Terry Tao fans, also: see this)

Question: Is the ISS a tennis racket? Does it have three unequal principle moments of inertia, and does it rotate around its intermediate axis?

Does it have three unequal principal moments of inertia...

Does the ISS have three distinct principal moments of inertia? The answer is definitely "yes".

Any object has a mass matrix, $M$. In three dimensions, this is a $3x3$ symmetric matrix. Because $M$ is symmetric, such a matrix can be diagonalised, so that $P^{-1} \cdot M \cdot P = \bar{M}$ is a diagonal matrix. The three elements on the diagonal of $\bar{M}$ are the principal moments of inertia $I_1,I_2,I_3$ and $P$ is a coordinate transformation between the original coordinate system (i.e. in which $M$ is expressed) and the coordinate system aligned with the principal axes.

There may be more than one solution for $\bar{M}$: for example, a sphere of uniform density has infinite solutions and for a cube of uniform density the principal coordinate system can be aligned with any of the 6 faces. For such objects, $I_1 = I_2 = I_3$. There are also objects with $I_1 = I_2 \neq I_3$, such as beams with a square cross-section.

However, in reality, all objects have distinct principal moments of inertia and thus behave like the tennis racket in the example. However, finding the principal axes is not always obvious and requires to know the geometry and mass distribution (ignoring flexibility!).

So yes, the ISS has three distinct principal moments of inertia.

...and does it rotate around its intermediate (unstable) axis?

We can try identifying the principal axes. Looking at this photo the ISS is fairly symmetrical: 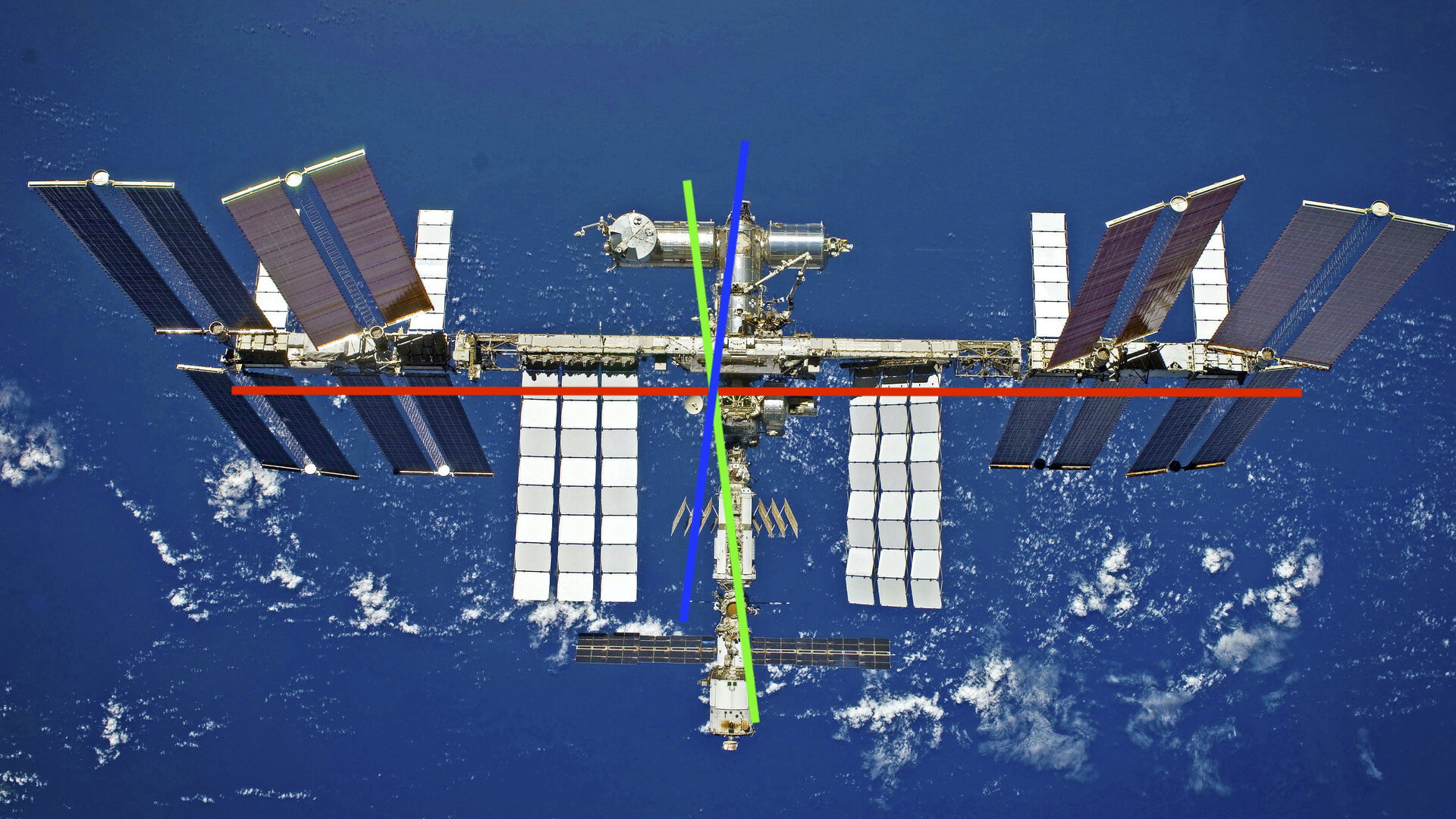 I tried to draw them in the picture.

The ordering of the moments of inertia depends on the mass distribution (ignoring stuff and people moving around inside). The moment of inertia for a point mass as $I = m r^2$, illustrating that it scales linearly with mass and quadratically with the distance to the principal axis. That said, I would guess that the moment of inertia around the blue axis is the largest and around the red axis the smallest, leaving the green axis as the unstable one.

The orbit direction is "up" in this photo, so the ISS rotates around the red axis, which is stable (based on the assessment). Note however that the axis is unstable only from a purely mechanical point of view; other effects (drag, solar pressure, etc.) have an impact as well.

This answer provides some references to various versions of the "On-Orbit Assembly, Modeling, and Mass Properties Data Book". In Volume I of the 2008 version (pdf) we find the following configuration (which seems to closely match the photo above) for January 2008: 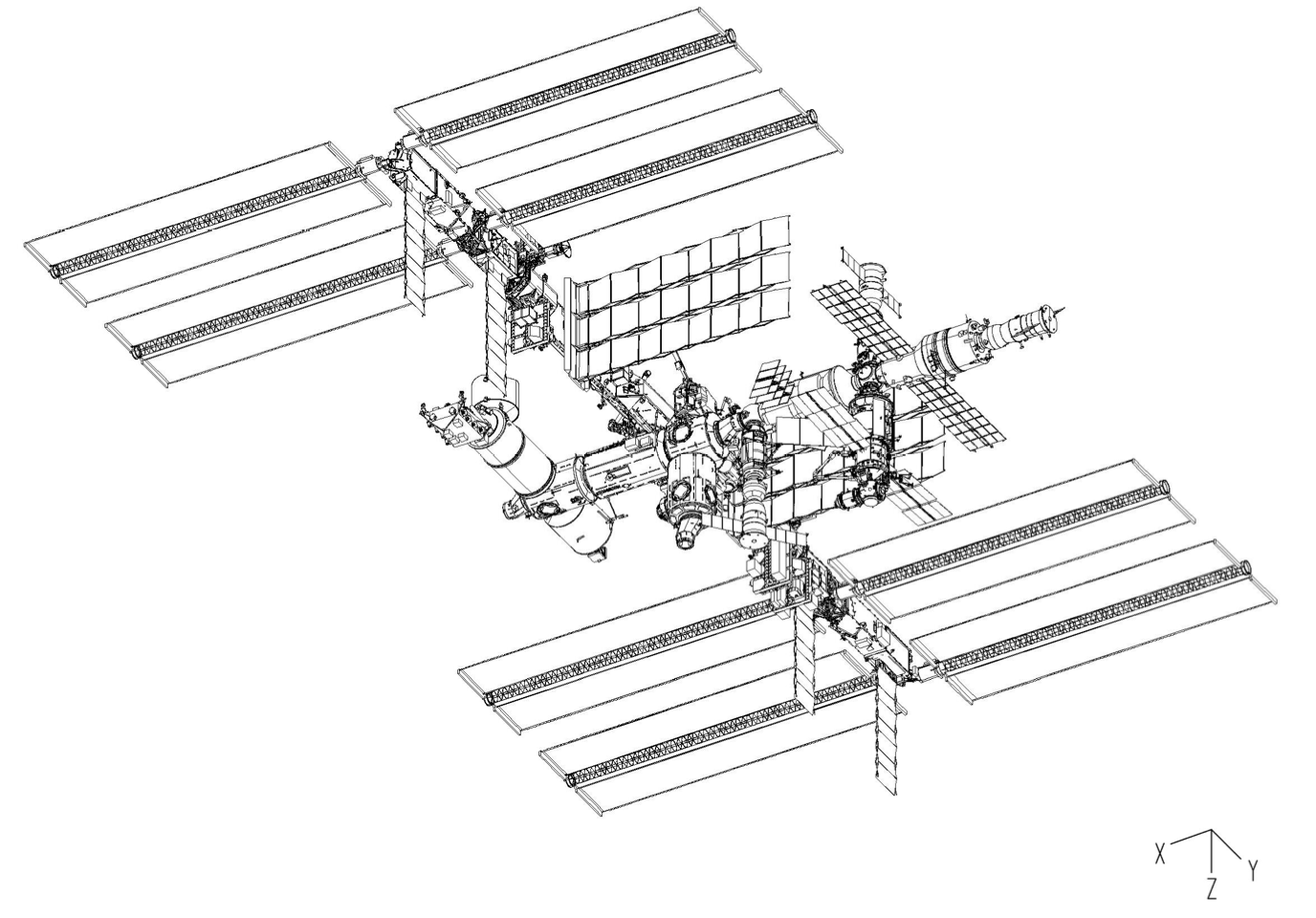 Note the axis definition in the bottom-right. The inertia tensor is given on the next page, as well as the principal moments of inertia: 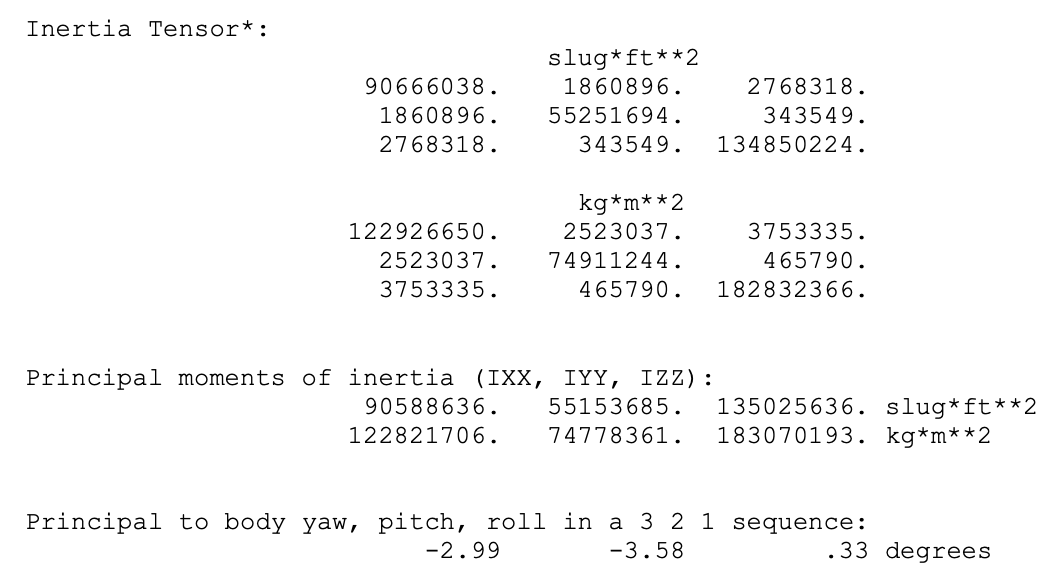 The mapping between my picture and the table is:

So the IXX axis is the unstable one. But again, unstable only from a mechanical point of view. The ISS rotates around IYY.

The angles on the last line show that the principal axes are pretty close to the reference coordinate system.

Not the answer you're looking for? Browse other questions tagged iss physics attitude-determination-and-control or ask your own question.

23
Why doesn't the ISS orient itself to the Earth's magnetic field like a compass needle?
5
How does spin stabilization intuitively work?
7
What are the ISS moments of inertia around design axes?
2
ISS cupola window orientation

9
How does the ISS adjust its solar panels?
19
Does the orbit of the ISS decay?
15
Which, if any, US laws apply on the ISS?
1
Why does the ISS use longitude and latitude to specify its position?
35
Why does the ISS rotate exactly once per orbit?
4
Does the ISS have a rotational motion in addition to its translational motion?
5
Would space ship/station rotation for artificial gravity cause the "axis" to also rotate?
6
Does the ISS still "need" to be at around 400 km?
6
Does America's Birthright Citizenship law apply to the American side of the International Space Station?
3
What causes GAIA rotational axis to precess the way it does? How exactly is this accomplished?