For a given 48 hour observing period, what fraction of the celestial sphere is available to CHEOPS?

Wikipedia's CHEOPS says that when successfully launched and deployed it will be in a 700 km circular Sun-synchronous orbit with "RAAN (sic): 6 am" which probably means it has an inclination of almost 82 degrees and rides the dawn/dusk terminator, precessing once a year so that its orbital plane maintains a relatively fixed orientation with respect to the Sun by slowly rotating around the Earth's center.

The control system is 3-axis stabilized, but nadir locked, ensuring that one of the spacecraft axes is always pointing towards the Earth. During each orbit, the spacecraft will slowly rotate around the telescope line-of-sight to keep the focal plane radiator oriented towards cold space, enabling passive cooling of the detector. The typical observation duration will be 48 hours. During a typical 48-hour observation CHEOPS will have a pointing stability of better than eight arcsec at 95% confidence.

I assume that the orientation may not need to be exactly fixed to the nadir, and if the issue is heat (keeping the focal plane cold) then CHEOPS needs shield it self from radiant heat from the Sun as much (or more) than it does from the Earth.

Question: For a given, typically 48 hour observing period with its "...pointing stability of better than eight arcsec..." what fraction of the celestial sphere would be available for CHEOPS to observe?

The CHEOPS Red Book talks about this in a couple ways.

Section 3.2 "Sky Coverage" (in the context of science requirements) says:

25% of the whole sky, with 2/3 in the southern hemisphere, shall be accessible for 13 days (cumulative; goal: 15 days) per year and per target, with observation duration longer than 80% of the spacecraft orbit duration (>80 min for 100-min spacecraft orbit).

(There are paragraphs of detail after each one; SR 2.1 is where the 48-hour observing time is motivated) So that's what they consider important.

They then (Section 3.3) document some visibility requirements:

In order to limit stray light contamination, the minimum angle allowed between the line- of-sight and any (visible) illuminated part of the Earth limb, the so-called Earth stray light exclusion angle shall be 35° (goal: 28°). This angle value is driven by the faint magnitude limit (SciReq 4.1). For brighter targets, this constraints could be relaxed.

This is followed up with a 120 degree "Sun Exclusion angle" and a 5 degree "Moon exclusion angle". (There's also a "Stray light analysis" in Section 4.4.5 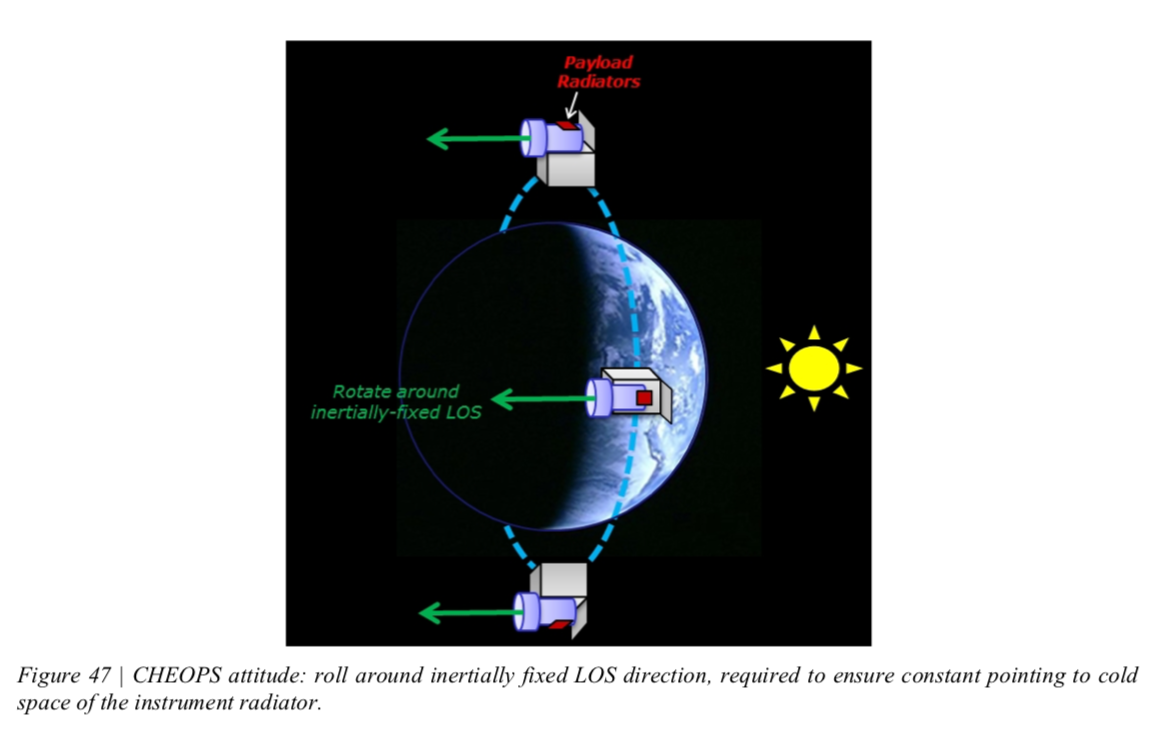 So now there are several ways ways to think about answering the Question:

1) (Probably not the intended question, but the way the science team will think about it) 50% of the sky will be accessible for at least 50 cumulative days of observation over the 3.5 year mission. CHEOPS doesn't care when it gets to a particular star, just that it can, for at least 50% of the sky. There's always something interesting to look at, and that sums up to 50%...

2) In any particular 48-hour period, there are constraints from the Sun, Earth and Moon that vary with their position and the intensity of the target star. (Bright targets might be accessible over a slightly wider field) Because CHEOPS is working through a series of target stars, some fraction of those will be accessible within the constraints: The science team (almost certainly) uses those lists of stars visible in each period to construct the observing schedule. But one could still construct a period-by-period calculation of the section of the sky that's accessible during each period.

3) Or you could construct averages based on solid angles.

For that last one: The Sun excludes 120 degrees: cos 120 is -0.5, so that's 3/4 of the sky. Half of the time CHEOPS is over sunlit earth, and the 35 degree exclusion is (from cos 35 = 0.82) 9% of the sky. The other half, there's a slightly less strict 1000km grazing limit: 5% of the sky. And the moon takes away 0.2% when it's present (which is not all that often, given all the other restrictions). These aren't uncorrelated, they dance around is quite coherent ways, but it we assume a lot of averaging:

(though the shape really isn't a cone; it's more the intersection of two overlapping cones with a hole in it for the moon)

Cheops is in a circular orbit with an inclination of 98° and a height of 700 km. Measurements are taken by observing the same spot of the sky for 48 hours while orbiting Earth about 30 times.

It's obvious that the camera must be pointed sideways, because in any other position Earth will obstruct the view at some point during the orbit. The camera doesn't need to be pointed straightly perpendicular to the orbit, but has to stay within a $\pm 26°$ cone. Additionally, the camera can only be pointed towards the night side of Earth to prevent stray light from the Sun to enter the optics.

Note that the tilt of Earths' axis is not important here - it just changes which exact part of the sky can be seen, but not its area.

0
How many flavors do dawn-dusk Sun-synchronous orbits come in?

1
What is NEOCam's (now NEO Surveyor) strategy for scanning the sky? Need to consider in which coordinate system?