Is there a lot of space trash at the Earth-Moon Lagrange points?

Edit: The L4 and L5 Lagrange points are stable in both directions "provided that the ratio of M1/M2 is greater than 24.96," to quote the Wikipedia article linked above, which is the case for the Earth-Moon system. In light of this fact, my updated question is: Is there a buildup of space trash at any of the Earth-Moon Lagrange points? 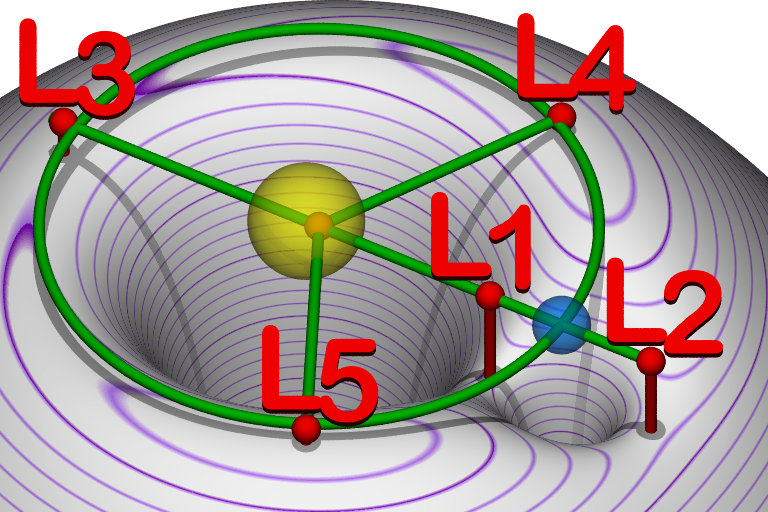 To add to other answers, the L1-L2 Lagrange points are unstable because they need to follow radial velocity of the two parent bodies as they orbit each other, in our case the Earth in a heliocentric orbit around the Sun, but none of them are really at the orbital altitude matching their radial velocity (too slow in L1 and too fast in L2). Since the Earth's orbit isn't exactly circular (orbital eccentricity of ~ 0.017), their altitude will also slightly change during one orbital period. This is less of a case with L4-L5, and arguably also L3, depending on orbital eccentricity of parent bodies, and is where we might find Trojan and Hilda family of asteroids, respectively. All these Lagrange points can also be perturbed by gravitational influence of other celestials in the system, for example Jupiter's and even Moon's orbit in case of L1-L2 Sun-Earth points. And this is of course about instabilities in the velocity vector along the M1 parent body. Orthogonal to it and towards the M1 and M2 bodies, it's just the tipping point in direction towards M1 or M2.

So Lagrange point satellite orbits need to be managed, what's usually referred to as orbital station-keeping. Effects of these perturbations and instabilities can be somewhat offset by placing Lagrange point satellites into Halo or Lissajous orbits and using precision orbital insertion, but not even these will be stable without using onboard propellants and corrections to their orbits. Any orbital debris or whole defunct satellites will eventually spiral towards the Earth (see update to this answer, but they hold too much orbital momentum to really fall towards the Sun, as their orbital period actually matches that of the Earth's, but their semi-major axis towards the Sun doesn't for about ± 1.5 million kilometers or roughly ± 1%).

TL;DR: All this means that the L1 and L2 points would essentially be free from long-term orbital debris. And with L3-L5, unless the bodies there formed from the same protoplanetary disk and share same radial velocity that's required to stay at that altitude, there is nearly no chance that any other body with significantly different orbital energy would be captured at those points. But if we deliberately placed satellites there, any debris from them would stay there for a lot longer than with L1 and L2 points (and perhaps L3, as mentioned before).

Edit: Apparently, I've misread the question initially and was answering for the Sun-Earth lagrange points instead of the Earth-Moon ones. OK, no problem, most of the problems remain the same in theory, only the L1-L3 saddle points are even more unstable. Moon's orbital eccentricity is ~ 0.055, so L1-L3 points move even more along the Earth-Moon axis. On average, EML1 is 326,380 km away from Earth and 58,019 km away from the Moon, EML2 448,914 km and 64,515 km respectively, and their velocities would be (again, average) ~ 0.87 and 1.2 times average orbital velocity of the Moon (1.022 km/s). They are even more perturbed, especially by the Sun itself and the complexity of the Moon's orbit relative to the Sun (it never curves on itself in loops though, contrary to popular beliefs). 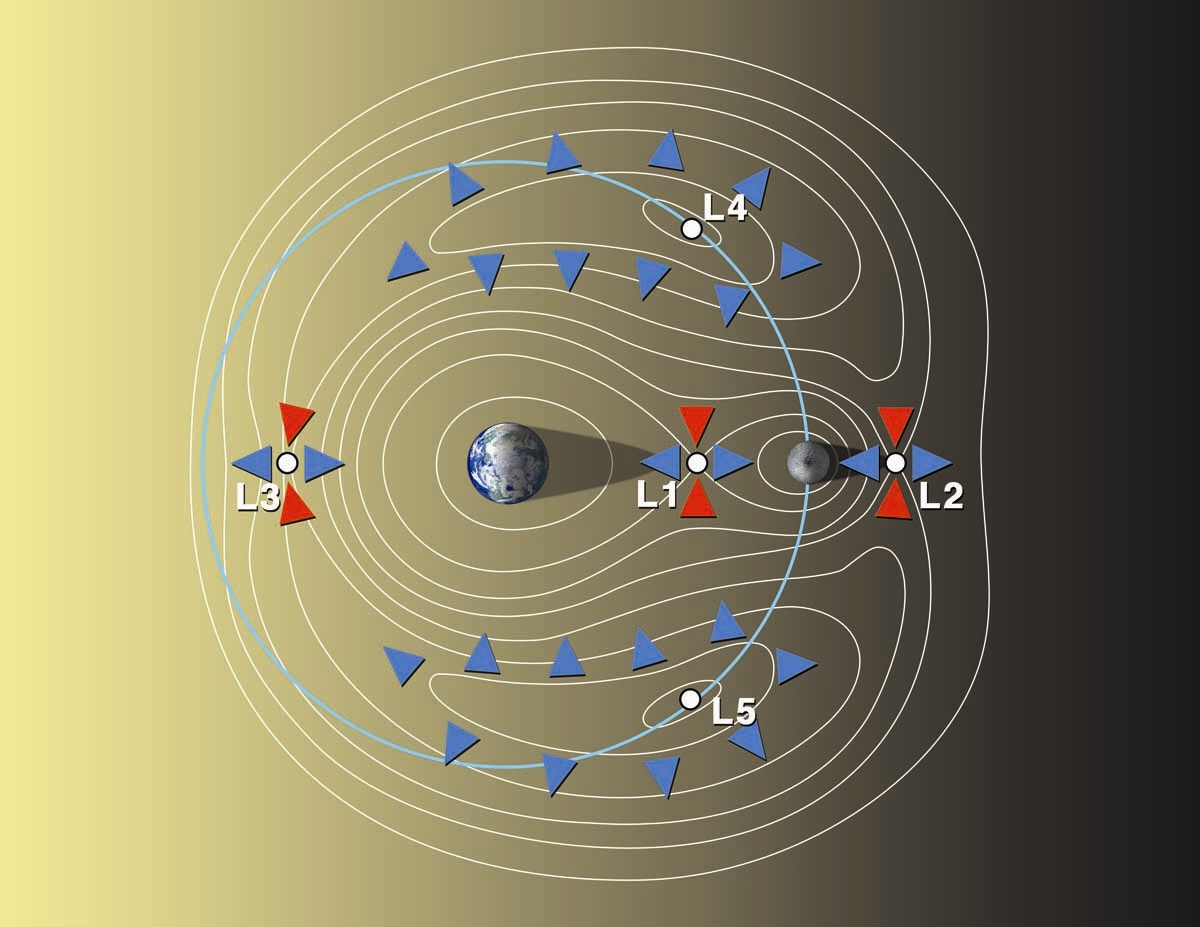 The Lagrange points for the Earth-moon system. Credit: David A. Kring, LPI-JSC Center for Lunar Science and Exploration

And this is how Lissajous orbits of the ARTEMIS (Acceleration, Reconnection, Turbulence and Electrodynamics of the Moon’s Interaction with the Sun) mission's P1 spacecraft's EML1 and EML2 orbits looked like: 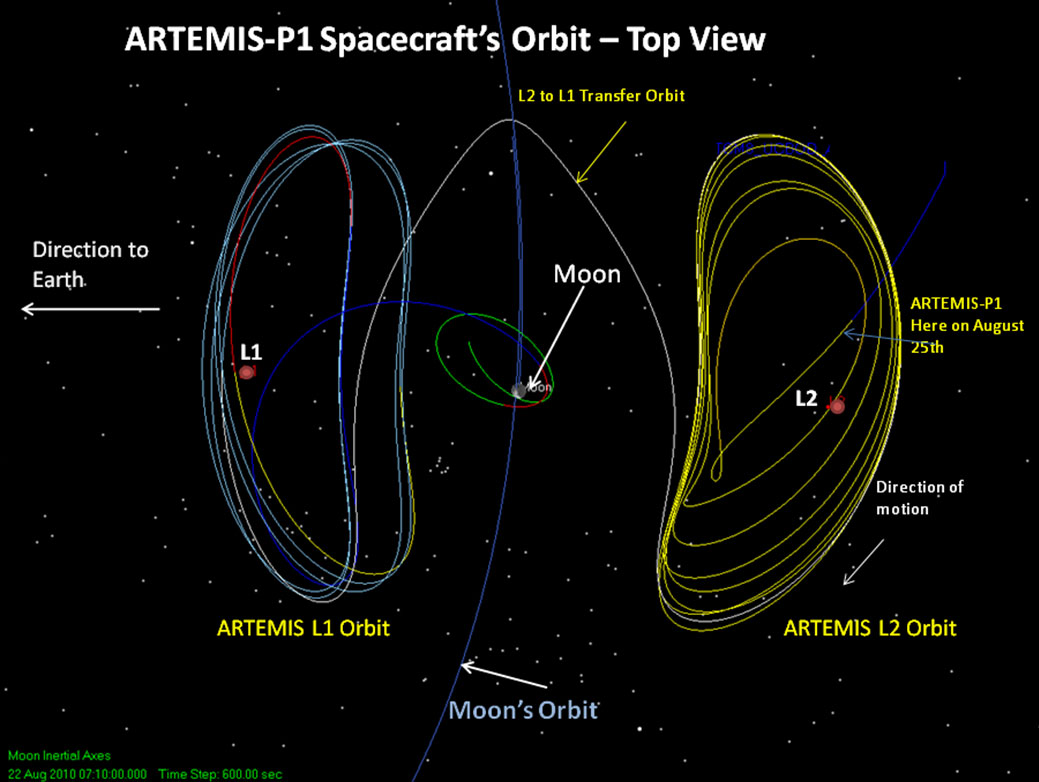 The view from above of the ARTEMIS orbits as they make the transition from the kidney-shaped Lissajous orbits on either side of
the moon to orbiting around the moon. Credit: NASA/Goddard Space Flight Center 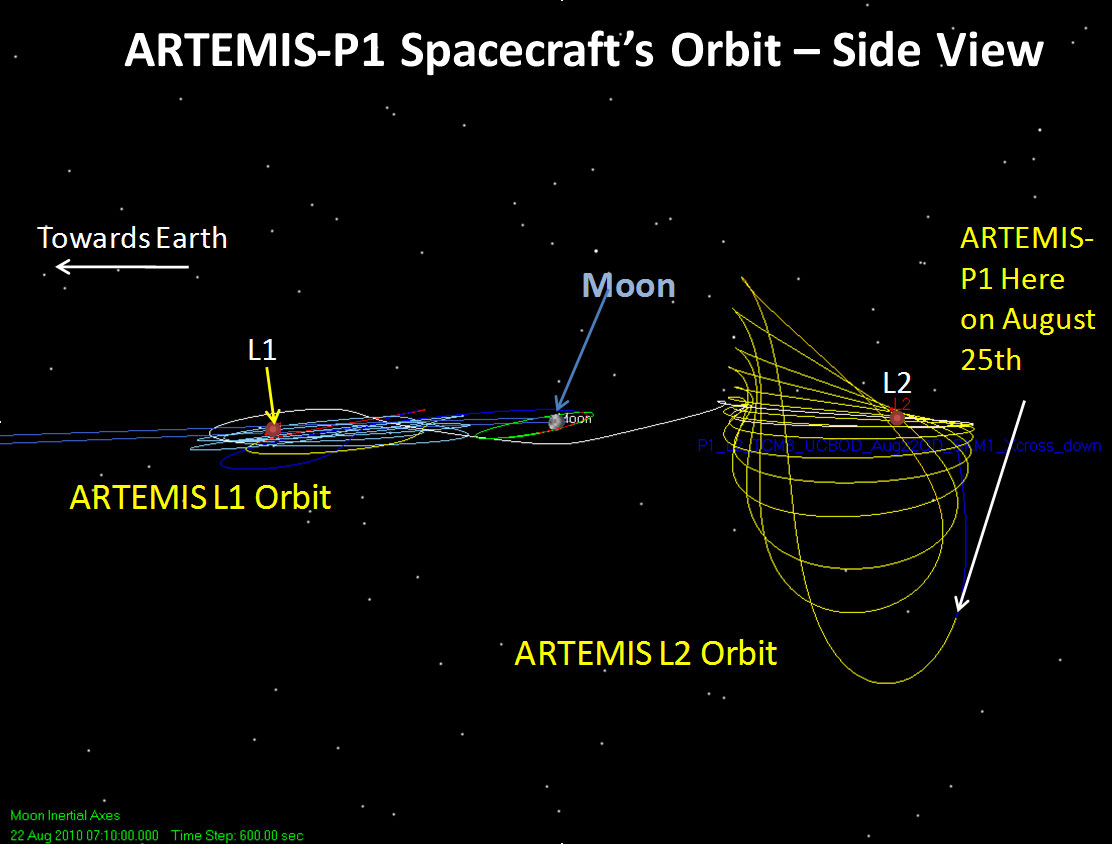 The Lagrange points L1, L2 and L3 are stable in prograde- and retrograde direction, but unstable on the radial axis. That means any object on these points will drift away in radial direction unless it uses small amounts of thrust to balance on these points, so any concentration of natural mass or debris at these points is impossible.

Only the points L4 and L5 are stable, and objects, so-called "Trojans", tend to orbit these points. There is also one which orbits the Earth/Sun L4: 2010 TK7. It's rare for trojans to orbit closely to the lagrange points. The reason is that these points would only be 100% stable when the Sun and Earth would be the only objects in the solar system. But due to the gravitational influence of the other planets, an object parked exactly at L4 or L5 would be slowly but steadily dragged away from its point and end up in an orbit around it.

The L4 and L5 points of Moon/Earth appear to be clean, except for some faint clouds of dust, and even the existence of those is disputed.

There's a number of missions that have headed to various of the Lagrange points, see Wikipedia for a good list. Let's look at what it takes to stay there:

There has never been an L3 mission, but the same sort of logic follows, fuel usage is required to maintain that orbit, and as a result, there shouldn't be a large amount of debris left behind there.

Not the answer you're looking for? Browse other questions tagged orbital-mechanics debris lagrangian-points or ask your own question.

13
If something "falls off" the L2 or L1 point, where will it go?
6
'Orbiting' Earth-Moon L1
7
What plane will DSCOVR’s orbit be in?
6
Are the Earth's 10 Lagrange points stable and large enough to park multiple satelites/space vessels
4
How likely will the James Webb Telescope encounter debris trapped at L2?

19
How deep is the force well of L4 and L5 Lagrangian Points of Earth-Sun set?
36
Why should the James Webb Space telescope stay in the unstable L2?
8
Can a whole planetary system have Lagrangian points?
20
Are there any (Lagrange) points in the Solar System in perpetual shade?
12
Low Energy Transfer within Earth-Moon system
7
Where will objects end up, after losing stability at Lagrangian points?
7
Do Lagrangian points apply to eccentric orbits or binary systems?
8
How did the Apollo guidance computer handle the Earth-Moon system's rotation around the Sun?
3
Can mascons have Lagrange-like points? In principle? At the Moon?