What does "clumps and streams" of hydrogen leaving Mars' atmosphere really mean? Are there images of them?

This excellent answer to Just how huge is Mars' cloud of hydrogen? links to the 14 October 2014 Nature News item "Hydrogen Cloud Blows Off Mars", by Alexandra Witze, https://www.nature.com/news/hydrogen-cloud-blows-off-mars-1.16156 (October 2014) which says

Hydrogen seems to be leaving the planet's atmosphere in clumps and streams that extend as far as about 10 Mars radii (roughly 34,000 kilometres) into space, said Michael Chaffin, a MAVEN scientist at the University of Colorado Boulder, at a 14 October news briefing.

The hydrogen comes from water vapour that breaks apart in the upper atmosphere. And because hydrogen is so much lighter than oxygen, it escapes into space relatively easily. “That’s effectively removing water from the Martian atmosphere,” says Chaffin.

and includes the image below.

I don't understand how the hydrogen, produced by dissociation of water in Mars' atmosphere then form clumps and/or streams and then leave it.

Question: What does "clumps and streams" of hydrogen leaving Mars' atmosphere really mean? Are there images of them?

I see neither clumps nor streams in the third image. Perhaps more information has been shared since 2014? 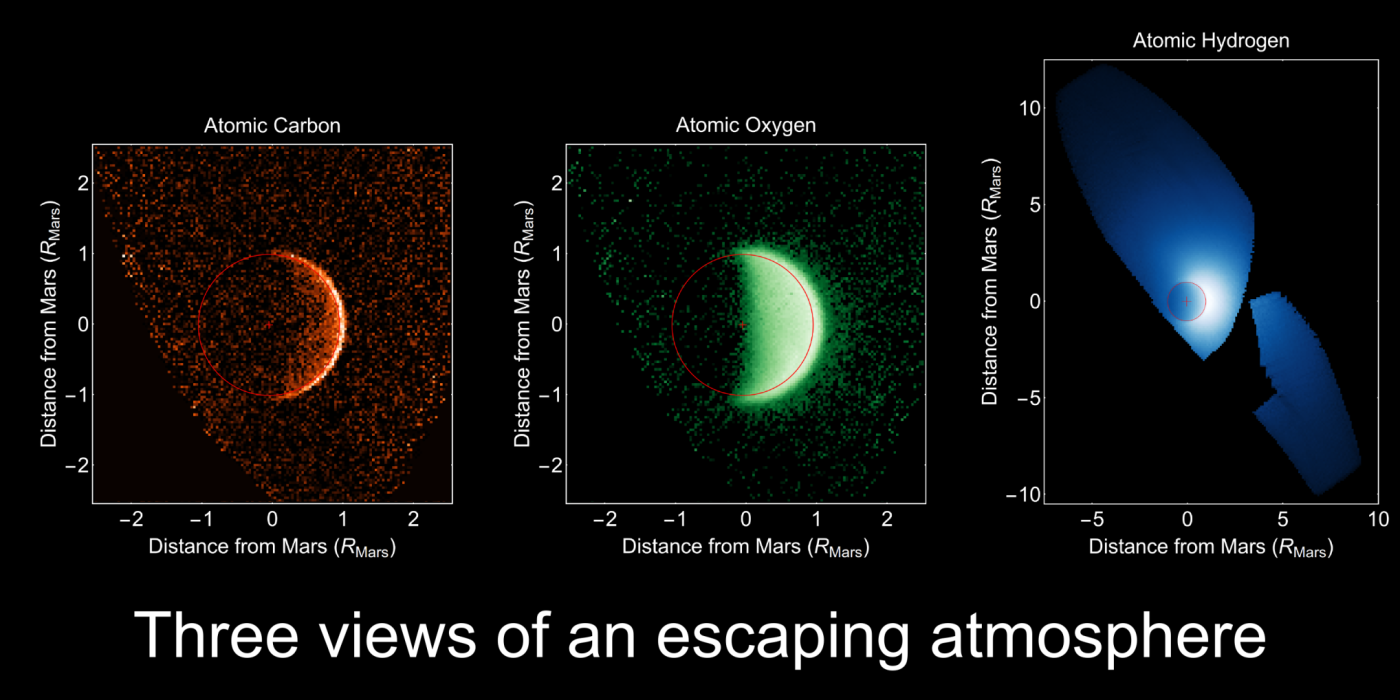 Browse other questions tagged mars atmosphere planetary-science maven or ask your own question.

2
Just how huge is Mars' cloud of hydrogen?

12
What risk management options are available for Mars orbiters and rovers to mitigate threat of impacting with Siding Spring cometary debris?
6
Are there proper ore bodies in Mars' crust?
4
Mars' atmosphere and the triple point of water
4
What downsides are there to a low pressure dome over a Mars base?
5
How were Mars' zero elevation datum defined? What are their shapes?
2
Just how huge is Mars' cloud of hydrogen?
3
Are Mars' atmospheric CO₂, O₂ and CO in equilibrium? Are sunlight or chemical reactions involved?