I cited objects 41332 and 41333 launched in early 2016 as counterexamples to this answer on my highly down voted and closed but otherwise "perfect" question What regulations, agreements, or other forces can help mitigate “PrankSats”?

Answers to When (roughly) will North Korea's Kwangmyongsong-4 satellite re-enter? range from

in about 25 years. Depending on how much drag it produces, it could be longer.

Question: After almost 4 years, how has their altitude decreased so far? Are they loosing it at a rate expected for dead spacecraft of their estimated sizes and shapes?

Here’s what I get from all the TLEs currently available at www.space-track.org processed with the SGP4 library freely downloadable from the same site.

1-orbit mean radius vector: numerically integrated radius vector against the eccentric anomaly (it’s the semi-major axis). The integration starts from –T/2 and ends to T/2 before and after the TLE epoch (1 orbit). Not to be confused with the osculating semi-major axis.

1-orbit minimum radius vector: find the smallest radius vector from –T/2 to T/2 before and after the TLE epoch (1 orbit). Not to be confused with the osculating perigee.

1-orbit mean air density: numerically integrated air density against the time divided by T. The integration starts from –T/2 and ends to T/2 before and after the TLE epoch. The air density is calculated at the satellite position with the NRLMSISE-00 atmosphere model updated with the solar and geomagnetic indices in the file www.celestrak.com/spacedata/SW-All.txt.

For the graphs that show the radius vector, the vertical axis is scaled to a sphere with a radius of 6371 km, just to show an approximate altitude.

The following graph shows the mean radius vector of both the objects: 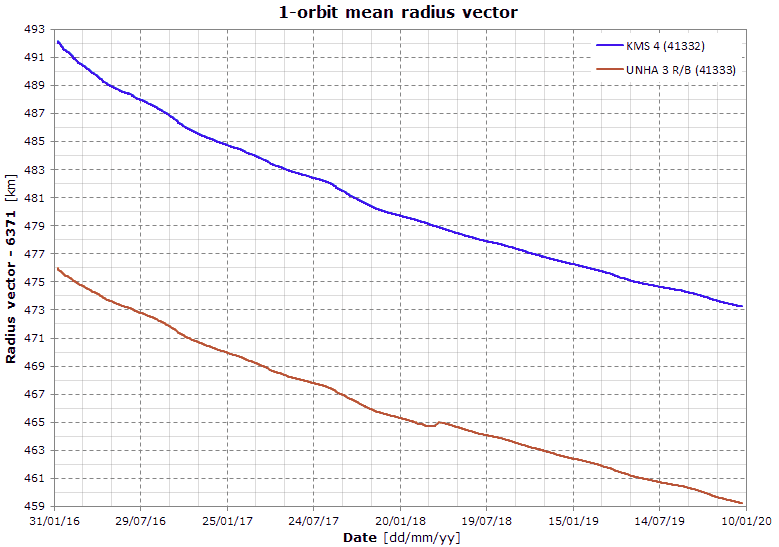 We see two strange things: 1) the blue plot shows an higher decay rate when the satellite is flying higher; 2) the orange plot shows something similar to a small reboost (it seems strange to me because a decaying rocket body should be a non-maneuvering object).

With the help of the following graph, we see that the blue plot is not strange: 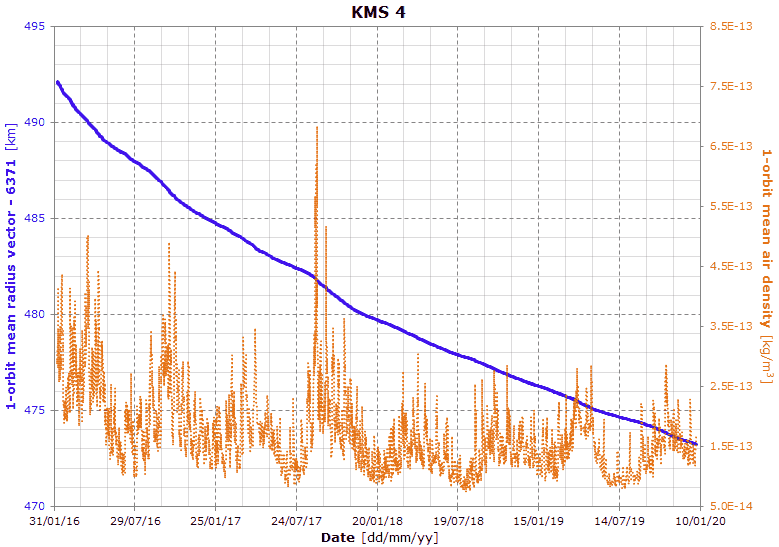 The air density is clearly very high on the left side. That seems sufficient to me to explain the higher decay rate. 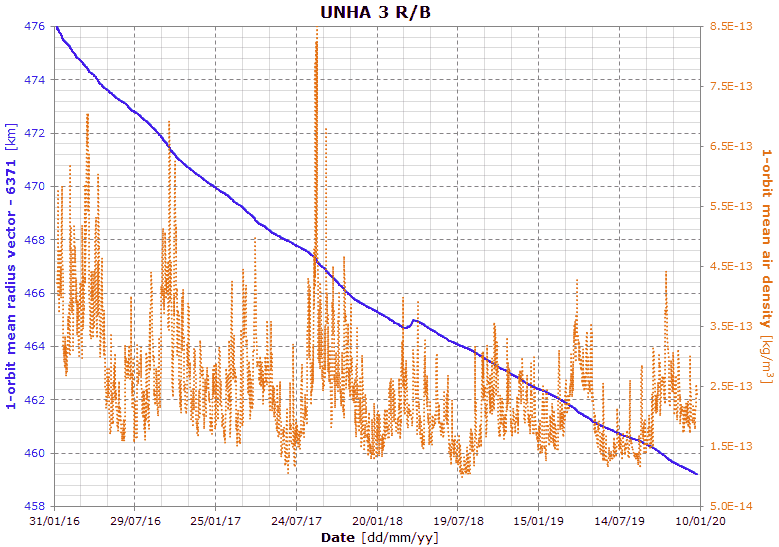 and its detailed view: 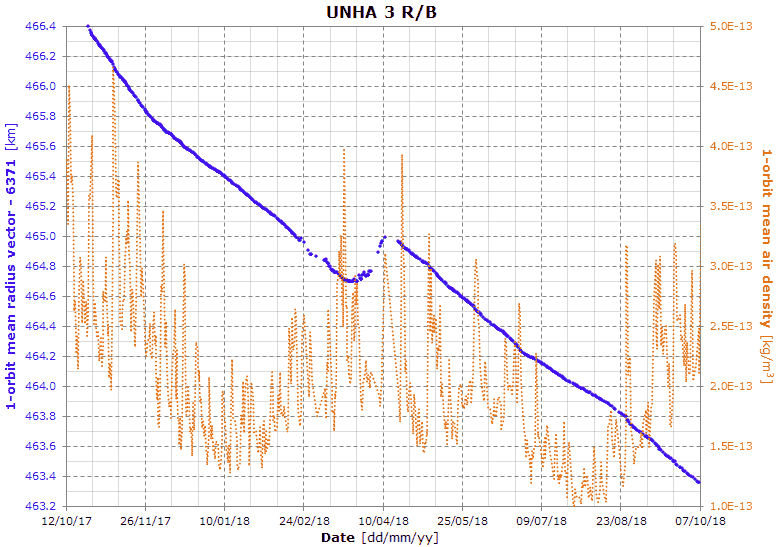 The radius vector starts to increase at the air density peaks, but I guess that a 250-meter increase in mean radius vector cannot be explained by just a lift effect. Moreover, if we look at the minimum radius vector, we see a much bigger increase: about 2.1 km: 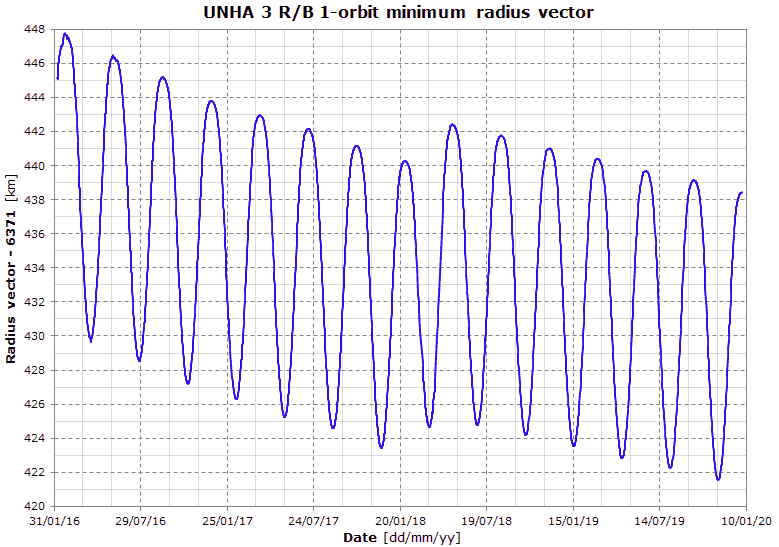 After almost 4 years, how has their altitude decreased so far?

Do you really mean “altitude”? If the radius vector is good for you, the values are readily available from the graphs (if you are interested in my excel file, I can upload it somewhere).

Are they loosing it at a rate expected for dead spacecraft of their estimated sizes and shapes?

41332 is staying pretty steady, although it is currently listed as "operational" in the databases I'm seeing. It is getting to be a bit lower, although I wouldn't expect it to reenter anytime soon, maybe 3-4 years left (I guess my original prediction was wrong...). Thus far the altitude has gone down about 20 km in 4 years, so 5 km/ year, although the rate seems to be increasing.

41333, however, is a spent booster, and obviously not operational at all. The average perigee right now seems to be around 420 km. It seems likely it has maybe another few years tops. From the plot the altitude hasn't gone down a huge amount, maybe 15ish km, so say 4 km/year.

Neither object is predicted by C-SPOC (Space Track) to reenter within the next 2 months.

Not the answer you're looking for? Browse other questions tagged atmospheric-drag north-korea or ask your own question.

16
What are the conditions for re-entry of an object in a (highly) elliptical orbit?
8
What is "propulsive passivation" and why will the SpaceX STP-2 mission do it?
3
What is a non-propulsive vent?
7
When (roughly) will North Korea's Kwangmyongsong-4 satellite re-enter?
4
What is the reason for secondary oscillations in apogee and perigee plots for objects 41332 and 41333?
-6
What regulations, agreements, or other forces can help mitigate "PrankSats"?